What Does the Abandoned ARM Acquisition Mean for NVIDIA’s Automotive Ambitions?

NVIDIA’s bid to acquire ARM was never motivated primarily by their automotive ambitions. This insight explores whether the abandoned deal is likely to have any major repercussions in the automotive market, and how the end of this troubled episode ranks alongside other competitive pressures facing NVIDIA in the automotive vertical.

In February 2022, it was announced that the US$40 billion acquisition of ARM by NVIDIA, first announced in September 2020 would be abandoned. The acquisition process had been apparently struggling to secure the approval of national governments, with regulators in the EU and UK citing concerns over the impact of the acquisition on semiconductor prices and innovation. With many Advanced Driver Assistance Systems(ADAS)/Automated Vehicle (AV) processors featuring silicon based on ARM IP, some regulators were concerned about the prospect of NVIDIA having control over key enabling components in their competitors’ designs. In December 2021, the US Federal Trade Commission sued to block the acquisition, specifically citing concern over the impact on autonomous driving/self-driving System on a Chips (SoCs) and networking silicon.

Given NVIDIA’s and ARM’s individual successes in a variety of consumer devices and enabling technologies, the abandonment of the acquisition is likely to impact on a wide range of end markets, including the automotive industry.

In the first instance, it is important to recognize the ARM acquisition was by no means NVIDIA’s sole ticket into automotive. On the contrary, NVIDIA is well established in the automotive vertical, supplying into the infotainment and ADAS/AV domains, supporting the latter both with embedded processors and high-performance compute for neural network training and refinement. 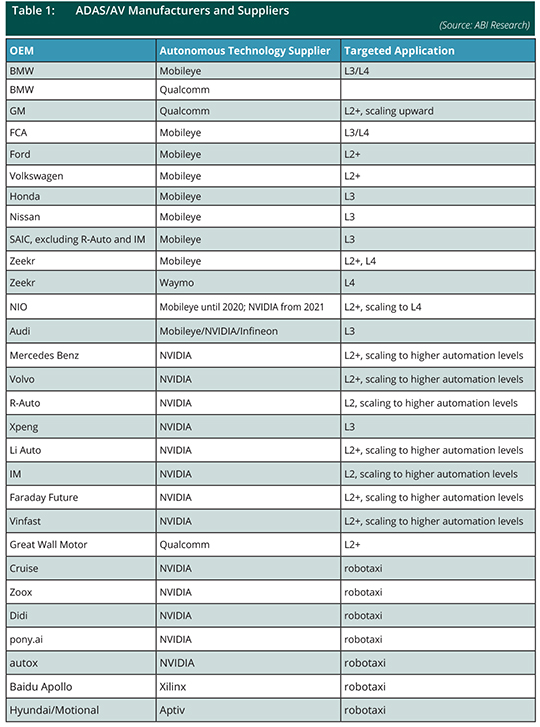 As the above table demonstrates, NVIDIA holds numerous robotaxi partners, including prominent vendors such as Cruise, Zoox, Didi, and pony.ai. In the passenger vehicle space, NVIDIA’s most important commercial agreement is with Mercedes-Benz. An agreement announced in June 2020 will see NVIDIA DRIVE ORIN SoCs deployed throughout the Mercedes-Benz lineup from 2024 onwards, with NVIDIA’s DRIVE AV software stack/modules forming the basis of applications that can be rolled out over time, opening up opportunities for installed-base monetization through OTA software updates.

Outside of China, NVIDIA’s other major customer in the passenger vehicle space is Volvo, which has likewise opted for NVIDIA’s DRIVE ORIN SoCs as the enabling platform for their future AV deployments. However, NVIDIA will now face stiff competition from Qualcomm, as the semiconductor giant expands their AV footprint through the  acquisition of Veoneer. Indeed, the combination of Qualcomm’s Snapdragon Ride SoC and Veoneer’s Arriver AV software stack has secured BMW as a customer for the forthcoming Neue Klass EV models. Given the fact that Volvo is an existing Veoneer customer, and the legacy of joint AV software development between Volvo and Veoneer through the now defunct Zenuity, it is likely that NVIDIA will face stiff competition in maintaining their position as Volvo’s primary enabling technology partner for future AV applications.

These commercial engagements with passenger vehicle Original Equipment Manufacturers (OEMs) are key to NVIDIA’s future success. In 2021 Mercedez-Benz and Volvo shipped 2.4 million and 0.7 million vehicles respectively. Therefore, a strategy to see NVIDIA SoCs deployed throughout the entire vehicle line-up represents a considerable market potential for NVIDIA, particularly as future sales volumes are likely to be higher once the semiconductor shortage is no longer a factor. In contrast, the entire robotaxi market is not expected to cross the threshold of one million units shipped per year until after 2030. There is also considerable risk to NVIDIA and other robotaxi component suppliers in the propensity for robotaxi deployments to be further delayed, and the likely consolidation of what is currently multiple potential robotaxi customers.

Overall, it is unlikely that NVIDIA, being an established automotive supplier into more than one vehicle domain, will see their automotive ambitions significantly impacted by the derailed ARM acquisition. Certainly, NVIDIA finds itself in an increasingly competitive automotive business, with Qualcomm/Veoneer cementing their position as a further full stack competitor alongside Mobileye. Furthermore, many of the hallmarks of Qualcomm’s Ride platform, such as openness and flexibility, overlap strongly with those of NVIDIA’s DRIVE platform, which NVIDIA has used to differentiate against the more turnkey Mobileye solutions. Therefore, of all the pressures that NVIDIA faces in maintaining and expanding their existing automotive business, the abandoned ARM acquisition is far from the most significant

As for NVIDIA’s automotive competitors, the overall reaction is likely to be one of relief. ARM’s IP is found almost ubiquitously in AV chipsets, and even Tesla’s in-house Full Self Driving (FSD) chip employs ARM’s IP. While Mobileye has based various iterations of their EyeQ processors on MIPS architecture, and even introduced RISC-V-based accelerator cores on the EyeQ Ultra announced at CES 2022, this heterogenous chipset will also feature an ARM-based Graphics Processing Unit (GPU) and Digital Signal Processor (DSP). Therefore, any automotive chipset designer with lingering concerns over the governance model of a combined NVIDIA-ARM/competitor-development partner tie up will now be able to focus on innovation and working with ARM on developing the next generation of AV technology in the way that they are used to.