The Communication Service Providers (CSPs) of today either have their eye on or have already begun the process of virtualizing their networks. This comes in the form of Network Function Virtualization (NFV), notably Cloud-native Network Functions (CNFs). The responsibilities of traditional hardware network assets provided by Network Equipment Vendors (NEVs) are increasingly being carried out through software, which improves Time to Market (TTM). To fill this growing market need, public cloud service providers have come forward to help virtualize 4G/5G networks all around the world. The public cloud not only provides improved deployment flexibility, but also affordable “pay-as-you-go” pricing models based on microservice applications. While jumping straight into the public cloud may be practical for some newcomers (greenfield operators) or industry disruptors like DISH, the traditional CSP should still view private on-premises deployment as a proven telco cloud strategy because it delivers on performance, cost, and security.

Unlike public cloud infrastructure, a private telco cloud uses a single vendor or relatively few vendors. This less congested approach to infrastructure reduces the complexity and overall cohesiveness of solution interoperability. When a CSP runs its network on the public cloud, it means Operations and Management (O&M) platforms have to merge with the cloud provider—making it more difficult to share information across various virtualized network layers and increasing the time it takes to monitor a network from milliseconds to seconds. However, on a private telco cloud, you don’t have to worry so much about these issues.

Having fewer vendor partners also translates to enhanced security, as explained in the next section.

Although two out of three organizations already store sensitive data or workloads in the cloud, 75% of them are, at best, moderately confident in safeguarding these data on their own. As these survey results from Cloud Security Alliance reveal, enterprise customers are putting their trust in their CSPs to ensure data are protected. However, if a CSP chooses to move the virtualized network to the public cloud, it should be known that this can increase the risk of a cyberattack—and potentially let these customers down.

A shared cloud network consists of many other clients, all with their own integrated CNFs. As a result, this provides bad actors with a greater number of access points to take advantage of. But with a private telco cloud, there’s just one organization using the network, naturally making it more difficult for cybercriminals to find exploits. All in all, CSPs have a far tighter grip on network security with on-premises cloud infrastructure than in the public cloud.

Finally, when Information Technology (IT) and other workloads migrate to the public cloud, CSPs make their networks more vulnerable to sniffing attacks, ransomware, and other cybersecurity concerns. Any countermeasures that a CSP may leverage through regional solutions could be lost once the virtualized network is operating on the public cloud.

No one can argue the benefits of a CSP migrating to the public cloud. Scalability, flexible pricing, and reduced risk are all highly attractive perks in the eyes of an operator. However, when taking a long-term view at the Total Cost of Ownership (TCO), it makes more sense to keep certain Data Center (DC) applications, such as containers, service meshes, user/data plane, and control plane on-premises. At the same time, other applications like telco IT, Operations Support Systems (OSSs)/Business Support Systems (BSSs), and management plane functions are well-suited for the public cloud.

Once a CSP fully virtualizes its network to the public cloud, the company is committed to a managed microservices and Operational Expenditure (OPEX)-based model. While moving to the public cloud significantly reduces Capital Expenditure (CAPEX) and is less expensive to operate in the short term, this won’t last. For CSPs that have a high volume of Network Functions (NFs) and high-performance packet processing workloads, OPEX under the public cloud will far outweigh the OPEX for on-premises cloud deployment.

After 10 years, a private DC will cost US$169 million to build, deliver, install, and operate, with CAPEX and OPEX being roughly equal. For a network running on the public cloud, that number will be US$180 million after 10 years and OPEX will account for almost all of the costs. For these reasons, moving all CSP infrastructure to the public cloud is not a wise strategy. 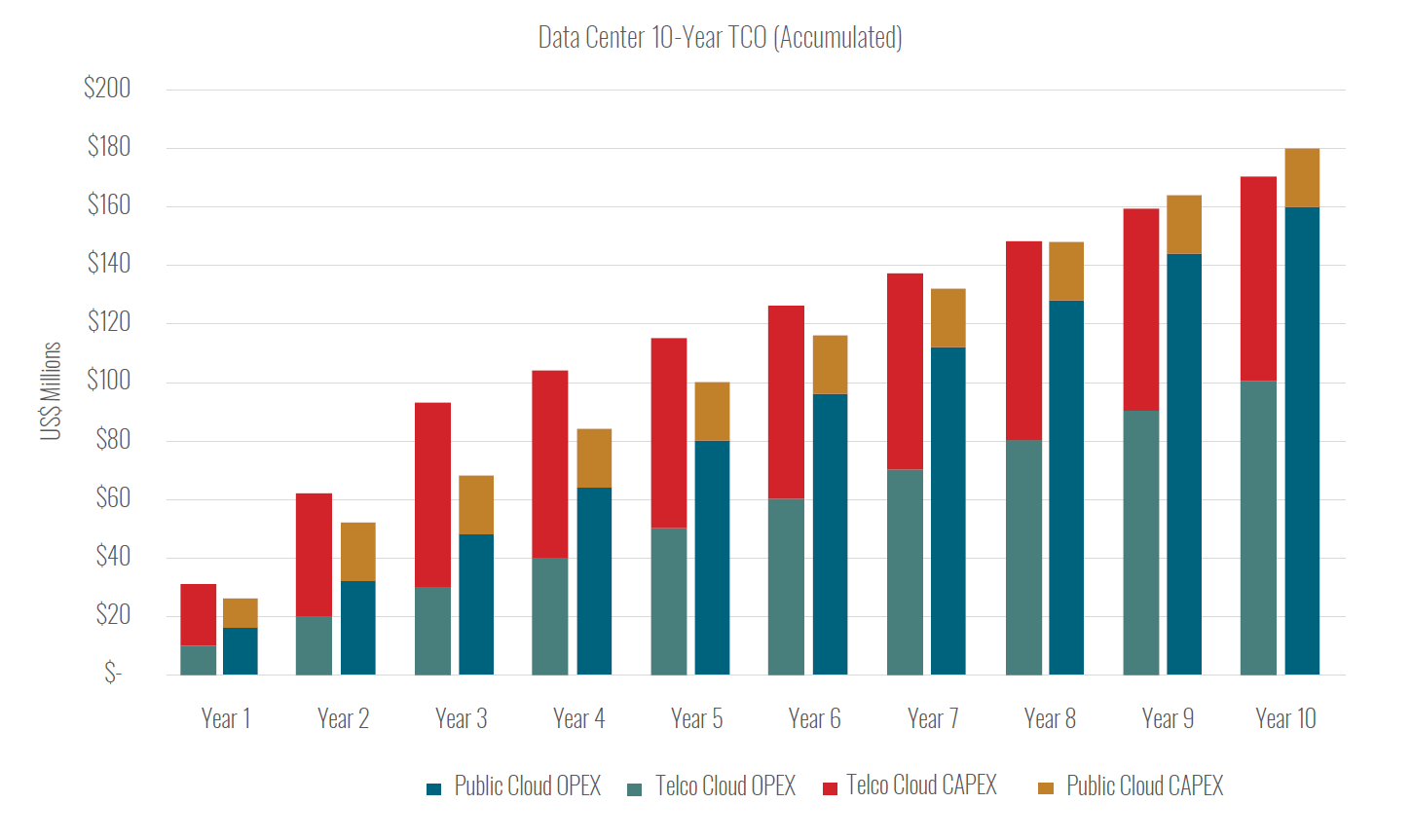 Considering edge computing can reduce cloud access latency by as much as 30%, many enterprise customers will undoubtedly seek edge placement solutions from their CSP provider. In point of fact, a recent Google Cloud survey indicated that 7 in 10 enterprises plan to invest in 5G edge within the next year. Offering distributed processing competencies not only creates new revenue streams, but can also decrease expenses for the CSP.

Whereas public cloud providers need to invest considerably in real estate, infrastructure, edge servers, and nodes, many telcos already possess these edge computing enablers. This is a key advantage for telcos in terms of TCO and TTM. According to cost estimates from ABI Research for edge cloud deployments in North America, the Do-it-Yourself (DIY) approach would be cheaper than installing the edge on the public cloud by year nine of deployment (US$2.67 million versus US$2.68 million).

Beyond this, ABI Research also compared the costs of a pure on-premises versus hybrid cloud edge for a private 5G network in a 25,000 Meter (m)2 factory. In this scenario, the hybrid approach offloads the enterprise's 5G control pane to the telco's 5G core network. The results? After 10 years, the hybrid edge network is slightly less expensive (US$1.32 million) than the pure on-premises approach (US$1.34 million).

Many use cases, notably industrial, campuses, and public safety, depend on high security, low latency, and wide bandwidth to operate efficiently. Private telco cloud infrastructure is already tailor-made for these types of customers as it excels in crucial features, such as Enhanced Mobile Broadband (eMBB), Ultra-Reliable Low Latency Communications (URLLC), and Massive Machine-Type Communications (mMTC). Without these features, customers would have a difficult time executing industrial applications like enterprise Internet of Things (IoT), automation, machine vision, Extended Reality (XR), and 5G network slicing.

Where Does the Hybrid Cloud Fit In?

As the name suggests, a hybrid cloud blends on-premises infrastructure with the public cloud and the private telco cloud—creating a single, consolidated computing environment. Offloading distributed compute and other IT/telco functions to the public cloud allows CSPs to minimize CAPEX where it makes sense. Besides reduced costs, a hybrid approach enables operators to provide flexible services and experiment with new workloads. Moreover, CSPs can quickly provide new solutions as customer demands shift.

On the downside, a hybrid approach adds confusion to the cloud stack because there’s a mishmash of various vendors on each side of the equation: physical/private cloud infrastructure and public cloud infrastructure. Additionally, incorporating network capabilities into the hybrid cloud can be an arduous process. Plus, as pointed out earlier, public cloud integration adds more risk to data breaches because there are multiple organizations with their own access points.

The age of 5G is only going to intensify the virtualization of networks, prompting CSPs to develop or build upon existing cloud infrastructure. This can be done through private on-premises, on the public cloud, or via a hybrid cloud model. Before making any permanent decisions, operators must carefully consider their priorities and unique situation. Is cost more important or is it flexibility? Do you want short-term savings now or are you planning for a decade down the line? 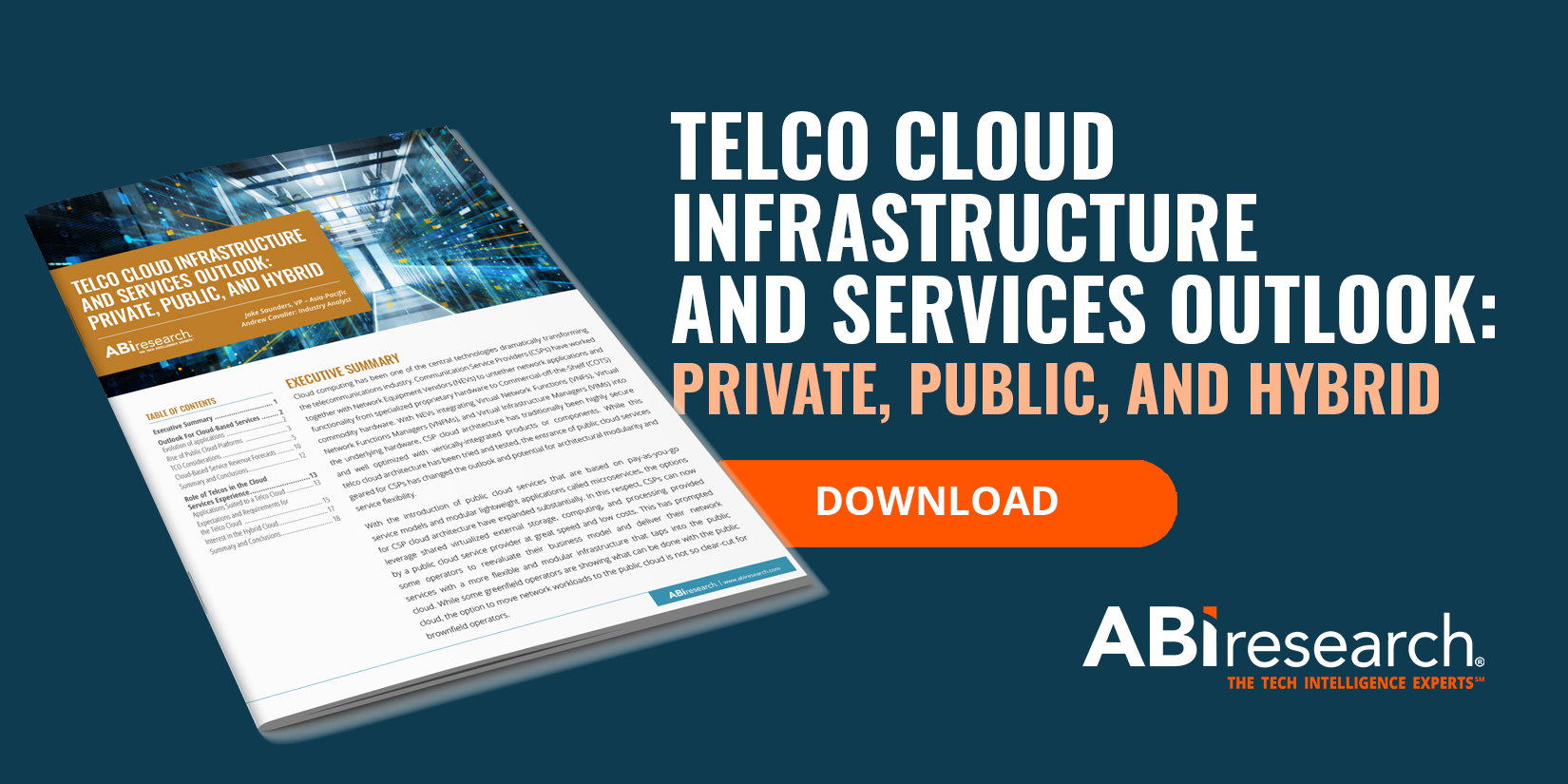 5G in Europe: What The Numbers Show Us