Sidelink is a Device-to-Device (D2D) communication technology that broadens Long Term Evolution (LTE)/5G network coverage. This technology has been around since The Third Generation Partnership Project (3GPP) Release 12 when it was used to enable basic vehicular communication (Vehicle-to-Everything (V2X)) on LTE networks. Over the years, there have been incremental upgrades, such as Cellular Vehicle-to-Everything (C-V2X) sidelink support in 3GPP Release 14 and 5G support in Release 15, among others. Then, 3GPP Release 16 introduced 5G New Radio (NR) support, which is highly beneficial for 5G users looking for deployment flexibility on-premises. Now we arrive at 3GPP Release 17 and Release 18 (5G Advanced), both of which are bound to challenge the way you think of sidelink.

To start it off, we'll look at how 5G sidelink relay and sidelink enhancement can be distinguished between one another.

3GPP Release 17 brings with it the first specification for the 5G NR sidelink relay. And then 3GPP Release 18, which concurs with 5G Advanced, will introduce sidelink enhancement. The key difference between the two is that while sidelink relays extend network coverage through a device acting as a network portal, sidelink enhancement refers to the extension of D2D communication to other use cases besides Vehicle-to-Vehicle (V2V) or Vehicle-to-Architecture (V2A). As an example of the latter, a pedestrian’s smartphone may alert nearby vehicles about the pedestrian crossing the street. The next two sections go into more detail on sidelink relays and the enhancement expected with 5G Advanced.

The Magic behind 5G Sidelink Relay

A 5G sidelink relay turns User Equipment (UE), such as mobile devices, into a proxy gateway connecting end terminals and the 5G network. In other words, devices in close proximity can maintain communication in the absence of a connection to a base station or a Global Navigation Satellite System (GNSS). This makes sidelink crucial for maintaining communication channels during a natural disaster or another major event that could cripple network coverage. As no surprise, the seeds of sidelink (known as LTE D2D) were originally sowed in the public safety sector. But there has been a considerable progression since those early days, leading us to the 5G NR sidelink of today.

So, how does a 5G NR Sidelink relay work anyway?

To make network extension possible, a sidelink relay leverages a single-hop NW-UE1-UE2 link to transmit a signal from in-coverage devices to devices outside the network. Alternatively, 5G network extension could be enabled by the NW-UE1-UEx paradigm. With this option, a smartphone, an IoT access point in a smart city, or another 5G-connected UE device serves as the relaying gateway to the network. Here, the UE provides coverage to power/price/space-constrained devices and accessories, such as earbuds, smart glasses, smartwatches, etc. To explain the concept of a 5G sidelink relay a little better, imagine someone wearing a low-powered device like a smartwatch. To connect to the 5G network, the smartwatch leverages the network coverage provided by a nearby smartphone (the IoT gateway). To that end, by using proxies to the network, new use cases will form, whereby a cluster of traditionally constrained devices will be able to take advantage of 5G. As these sidelink applications evolve, so too will commercial business models.

Sidelink Enhancement in the Age of 5G Advanced

Under 5G Advanced (e.g., Release 18 and beyond), sidelink will be able to go beyond V2X and V2A D2D communication. Indeed, smartphones, wearables, and similar devices will be able to communicate between themselves and with vehicles—making our roads and public transportation systems much safer. Besides extending D2D communication to new device types, further 5G NR sidelink enhancement includes improved accuracy, power efficiency, and the integrity of positioning measurements (up to <Centimeter (cm)) for Simultaneous Location and Mapping (SLAM) applications.

Although not necessarily considered sidelink enhancement, 5G Advanced (beginning with Release 18) will aim to solve the many challenges plaguing sidelink, such as the following:

According to a recent Yahoo press release, the V2X automotive market will be worth US$3.3 billion by 2026. Consequently, this means sidelink will have an increasingly supportive role in enabling critical D2D applications. As mentioned earlier, sidelink for vehicular applications has been around since 3GPP Release 12. However, this form of LTE-V2X was limited to basic safety features. Today, 5G-supported sidelink offers vastly superior V2X and Vehicle-to-Vehicle (V2V) capabilities. For starters, 5G NR V2X provides improved resource allocation, supported by resource pool sharing. Secondly, this technology smoothens out traffic flow via C-V2X vehicle platooning—minimizing Greenhouse Gas (GHG) emissions from running cars and trucks. Platooning allows groups of vehicles to communicate with one another to position themselves close enough so that they can form a “green wave.”

The fusion of V2X with 5G sidelink has also proven its worth for autonomous vehicle navigation, which relies on surrounding environmental data to make safe maneuvers. As Qualcomm’s demo at a recent Mobile World Congress (MWC) event showcased, a 5G V2X sidelink can notify a vehicle about an upcoming road obstruction before it’s even in sight. In the demo example, as one D2D-enabled vehicle drives by a stopped truck, it sends this obstruction information to a Roadside Unit (RSU)—which then transmits these data to an approaching autonomous vehicle. From there, the vehicle automatically switches to the left lane to avoid a collision or stoppage. This example from Qualcomm illustrates how far V2X has come, with 5G making it all possible.

Extended network coverage, in combination with lower latency and wider bandwidth, conveys obvious value of sidelink under 5G Advanced for public safety, automotive, the Internet of Things (IoT), industrial, fleet management, and a host of consumer use cases. Early commercial sidelink relay deployments will emerge in the enterprise market long before the consumer markets. This forecast is based on sweeping conversations with major stakeholders within the supply chain space and key technology implementers.

A prime reason for enterprise adoption of sidelink enhancement will come from the need for network coverage reliability for remote devices with weak signals. Moreover, further in the forecast period, using IoT gateways, sidelink relays can be used to provide 5G connection to IoT devices that are low-powered or cost-constrained. Not only does this approach extend 5G network coverage and reduce total infrastructure costs for users, but it enables new device types to connect and communicate with the network.

While the business case for 5G sidelink in the enterprise sector is clear, the same can’t be said about the consumer markets. Implementing these technologies in a public network is a convoluted process. ABI Research doesn’t expect sidelink to hit the consumer markets in a meaningful way until 2027 (for sidelink enhancement; relay will take until 2029 for a meaningful number of shipments). Smartphone devices, because they are good candidates for proxy gateways, will likely make up the bulk of consumer sidelink shipments.

To see the market forecasts for sidelink shipments through the rest of the decade, download the whitepaper: Is The Industry—And The World—Ready For 5G Advanced? 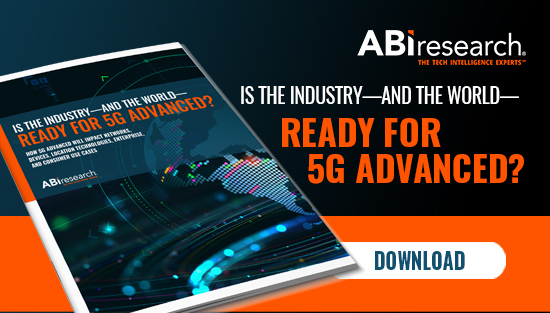 What Is Network Automation and How Is It Achieved?

5G in Europe: What The Numbers Show Us