For Cloud Gaming, Asia-Pacific Is Where the Money’s At

In 2020, COVID-19 and 5G adoption spurred gaming in the most populated Asian country—China—with domestic gaming revenues increasing 20% to US$43 billion and the number of gamers increasing by 3.7%, effectively making half of the entire Chinese population gamers (665 million gamers as reported by the China Audio Video and Digital Publishing Association).

In 2020, COVID-19 and 5G adoption spurred gaming in the most populated Asian country—China—with domestic gaming revenues increasing 20% to US$43 billion and the number of gamers increasing by 3.7%, effectively making half of the entire Chinese population gamers (665 million gamers as reported by the China Audio Video and Digital Publishing Association).

This is a huge cloud gaming market opportunity that has not gone unnoticed, with ByteDance (the owner of TikTok) soft launching their new cloud gaming platform Aoligame just recently in January 2021 and Huawei leveraging their Kunpen CPU to partner with Tencent and NetEase for cloud gaming. Beyond China, the rest of Asia region has also been active on the cloud gaming front—SK Telecom has launched their 5GX Cloud Game services as a subscription model for their 5G services, and Ubitus has partnered with Singapore’s Mobile Network Operator (MNO) Singtel to trial 5G cloud gaming.

As seen in Figure 1 below, while current mobile phone cloud gaming revenue in APAC is forecast to be driven primarily by 4G and Wi-Fi first, we see 5G contributing rapidly to cloud gaming revenue over the years. The estimated Compound Annual Growth Rate (CAGR) of 5G between 2020 to 2024 is 145%, compared with the CAGR of 4G and Wi-Fi of 72% during the same time period. 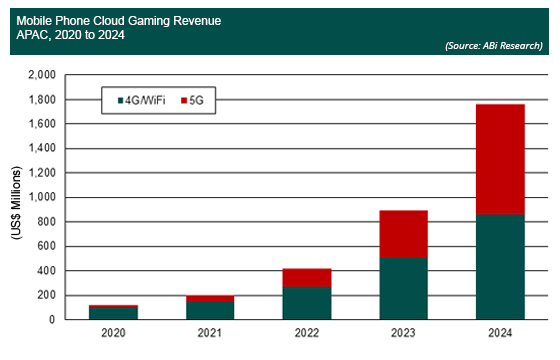 5G can enable cloud gaming by providing ultra-reliable low-latency communication, which will reduce potential sources of latency from the server, network, and client. 5G can also enable collaborative gaming and enhanced multiplayer gameplay by streaming other players’ movements and actions onto a player’s mobile phone in near real-time (potentially at sub-10 milliseconds), increasing the reliability of competitive mobile-based electronic sports. This will result in new business models and opportunities for MNOs to increase their average revenue per user by bundling existing subscription services with cloud gaming.

Further, we can expect to see an increased implementation of immersive technologies as an upcoming feature for cloud gaming, increasing the adoption of augmented reality or Virtual Reality (VR) in the future, thus making reliable and low-latency connections a much more integral component of these wireless and mobile applications. Already we see partnerships between MNOs and VR companies, such as LG Uplus’s launching VR gaming, Singtel and AIS’s partnering to develop a VR cloud-gaming platform, and China Mobile’s partnering with Ubitus for VR cloud gaming.

Cloud gaming is a nascent market that will face many limitations and challenges in its journey. As with any new market, it will take time and money to invest in buildup of the necessary infrastructure to support these services. For cloud gaming, this infrastructure includes data centers that require significant investments to ensure the low latency required, but this type of scaling is not possible without a reliable source of revenue.

Technological readiness is also an issue that needs to be addressed, as observed from Google Stadia’s highly anticipated launch that largely failed to deliver the performance needed to run AAA games on the same level as a console or PC. Further, the type of content available is also a challenge, with game developers still holding back on offering their game’s intellectual property to be stored on the cloud owned by a third party (the gaming platform), which could be prone to hacks and sabotage.

While these challenges may exist now, it is an exciting time for MNOs as they would be part of an invaluable component of the total supply chain for cloud gaming. It is important for MNOs to begin forging partnerships with cloud gaming platform developers or for them to endeavor to develop their own in order to increase the value of their services, to move beyond simply being a “dumb pipe,” and also to deliver exclusive or new content for their customers. Their involvement with cloud gaming platforms developers such as Google or Microsoft will position them in a much larger ecosystem beyond simply providing connectivity, thus bringing new opportunities and revenue potential.