A Central Bank Digital Currency (CBDC) (the digital form of a country’s fiat currency) involves the central bank of the economy in question doling out electronic tokens, instead of the usual process of minting coins and printing paper bills, whose intrinsic value is fortified by the faith and credit of the government.

There can be no doubt that recent years have seen the concept of CBDC’s explored with great intent by many global economies. Encouraged by the opportunity to revolutionize internal payments systems or seize a leading position in renovating the global payments infrastructure, many governments across the world are exploring the drivers and pain points of issuing a digital currency. While the majority of these are currently only in the prospective phase, a number of active trials have begun or concluded, with many more on the way.

While many citizens across the globe will be used to digital payments as part of the world’s march towards ironing hard cash out of the monetary system, CBDC’s have a key difference to a standard digital payment. While it is true that deposits held in high-street banks today are already digital and can be moved around electronically using payment cards and mobile payments, this form of digital money is the liability of private banks, who have the responsibility of keeping reserves and deposits. CBDC’s are the liability of the government in the same vein as fiat currency, which means that the central bank would be required to support it.

While many economies across the globe have looked to CBDC’s, it is China which has made the most headway. In May 2021, it was announced that China’s central bank forged a strategic partnership with Ant Group, the fintech associate of Alibaba Group, to construct a technical platform for its sovereign digital currency. This has been the intention of the Chinese government since 2014, when plans were first laid for a national cryptocurrency, with the electronic yuan, or e-CNY, aimed to lead the way to digitization and remove cash in circulation. The intention is to use the e-CNY for retail payments domestically, having already been tested in Shenzhen, Suzhou, Xiong'an, and Chengdu, before it is used abroad. The e-CNY is controlled by its central bank and will issue the new electronic money, unlike a traditional cryptocurrency which is fully independent of state or bank control. It is anticipated this will provide the Chinese government with new mechanisms with which to monitor both its economy and its people. By purposeful design, the digital yuan will negate one of cryptocurrencies advantages: anonymity for the user.

The next stage, once rolled out for domestic usage, will be pivoting the digital yuan for international trading, and by designing it to be untethered to the global financial system, it poses a serious challenger to the dominance of the US dollar on the international stage. Such a move enables China to drive its usage of digital currency in the country and set itself up for future financial technologies while establishing a stronger centralized position in the global financial market.

Other than China, a number of other countries have been looking to CBDC’s: 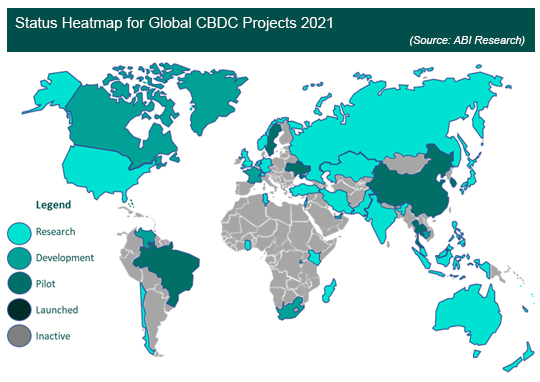 For now, the concept of a digital national currency is being driven heavily by the central bank of the country in question, with many pilots and trials exploring the possibility of their use in domestic and retail environments. In many emerging economies, national digital currencies are primarily being considered to increase financial inclusion by allowing governments to include unbanked populations in the digital economy.

While the majority of central banks are still in the preliminary stages of exploring the use cases for CBNC’s, one reason that is often cited for their development is they are considered to be a rebuttal against the growth of private forms of digital money. As more and more users demand convenient and low-cost digital payments, governments will be asking the question of who will implement such a system. As global economies continue the path towards becoming entirely cashless, apps like Venmo, WeChat and PayPal are streamlining greater payments volumes, raising fears about consumer protection, data privacy, and operational risks. With proposals in the works such as Facebook’s Libra currency, incumbent policymakers will be scrambling to develop an in-house solution before people embrace an alternative over which any given government has limited influence. China’s e-CNY pilot has introduced an element of competition as well, since seizing the wheel in CBNC development would enable China to influence how international trades and remittances evolve, especially as the Chinese government has already restricted bitcoin mining and trading activity to achieve financial stability.

CBNC’s do not come without several concerns, however. National digital currencies enable greater surveillance on the movement of money within the economy and while excellent as a tool for monitoring and reducing the risk of fraudulent activity, it could also prove a concern for the privacy of citizens. Financial volatility may also increase as banks and financial institutions will have to adapt their business models with citizens using government-provided digital cash. Finally, it goes without saying that central banks that would shoulder the responsibility for the national digital currency would need to significantly ramp up their operational capabilities to manage it from a number of angles including: defending user privacy, managing reserves and deposits, thwarting digital counterfeiting efforts, and mitigating cybersecurity threats.