Explaining the Various Wi-Fi Protocols and How They Differ

While most people know what Wi-Fi is and probably use it on a daily basis, few actually understand the difference between each protocol. With Wi-Fi 7 fast approaching, it’s a good time to explain each Wi-Fi protocol. Only by understanding the features and best use cases of each Wi-Fi standard can a sound decision be made about product development and marketing strategy. Besides that, we’d also like to point out what kind of demand manufacturers, vendors, and Internet Service Providers (ISPs) can expect for the various Wi-Fi standards in the coming years.

But before we start explaining each Wi-Fi protocol, learn how new protocols are made in the first place.

How Are Wi-Fi Protocols Formed?

A Wi-Fi protocol basically represents a specific generation of Wi-Fi, with each iteration bringing more advanced capabilities with it. Behind the technical foundations of Wi-Fi are organizations like the Wi-Fi working group (802.11) within the Institute of Electrical and Electronics Engineers (IEEE), and the Wi-Fi Alliance, which consists of a body of large companies active in Wi-Fi development. In order for a product/device to receive Wi-Fi certification, it must pass rigorous standards imposed by the Wi-Fi Alliance. To illustrate, if a technology manufacturer seeks Wi-Fi 6 certification for an upcoming product, it has to offer features such as Orthogonal Frequency Division Multiple Access (OFDMA), Multi-User Multiple Input, Multiple Output (MU-MIMO), 1024 Quadrature Amplitude Modulation (QAM), and WPA3 security. In the event that the product does not meet these standards, then certification will not be permitted. Often, there will also be a “Wave 2” recertification process as updates need to be applied to a Wi-Fi protocol.

The following infographic describes each major Wi-Fi protocol as they have been released since 802.11 was first introduced back in 1997.

Wi-Fi 4 (802.11n), established in 2009, is the oldest Wi-Fi protocol that is still used in new products today, albeit at a minuscule rate. Indeed, Wi-Fi 4 Access Point (AP) shipments are generally exclusive to cost-sensitive markets in Africa and Asia. While the protocol was an initial catalyst for the Internet of Things (IoT) due to its low-cost, low-power capabilities, the IoT market has largely moved on. That’s because Wi-Fi 4 standard failed to build upon the 2.4 Gigahertz (GHz) spectrum bands, which IoT devices often use. Through 2026, Wi-Fi 4 will still be sported in IoT devices that don’t rely on high performance. The maximum theoretical throughput for Wi-Fi 4 is 600 Megabits per second (Mbps). Although, any speed above 125 Mbps is rare.

Certified in 2013 by the Wi-Fi Alliance, Wi-Fi 5 (802.11ac) has seen many upgrades over the years. Not only did it have exclusive use of the 5 GHz spectrum, but its original 1.2 Gigabits per Second (Gbps) theoretical throughput gradually increased to 6.92 Gbps. That increase was thanks to impressive jumps in channel widths (80 Megahertz (MHz) to 160 MHz) and Multiple Input, Multiple Output (MIMO) streams (triple stream to eight spatial streams). Wi-Fi 5 is also backward compatible with Wi-Fi 4. Although Wi-Fi 5 accounted for 42% of chipset shipments in 2022—due to Wi-Fi Customer Premise Equipment (CPE) continuing to support the protocol—it will rapidly lose hold in the market. By 2026, around 5% of CPE will feature Wi-Fi 5, and Wi-Fi 6 chipsets shipments are already surpassing Wi-Fi 5 for consumer smartphones and laptops. 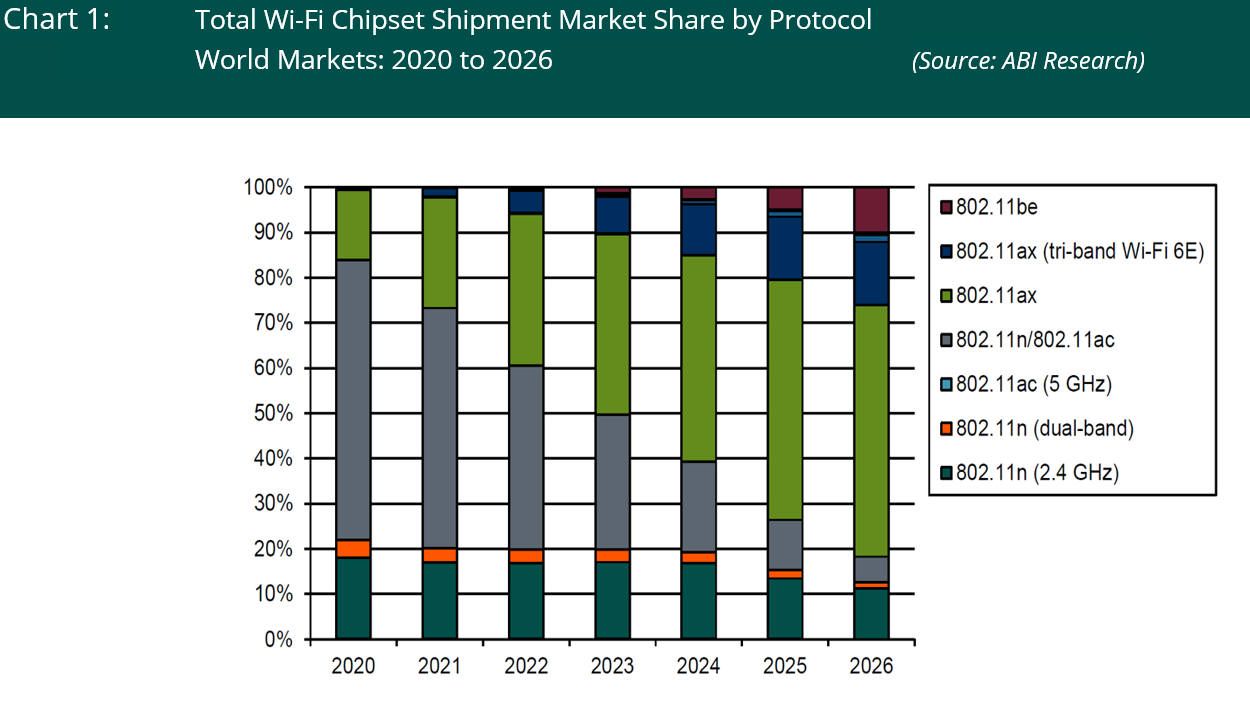 Wi-Fi 6 Has More than Meets the Eye

Wi-Fi 6 (802.11ax) was introduced in 2018 and is the first protocol to have a numbered name from the beginning. Wi-Fi 6 transmits on both 2.4 GHz and 5 GHz bands using all 8X8 spatial streams with 160 MHz channels—a theoretical throughput of 9.6 Gbps. However, standard 2X2 client devices can only sustain 2.5 Gbps. When looking at raw throughput alone, the jump from Wi-Fi 5 to Wi-Fi 6 doesn’t seem that impressive. But the new standard is packed with new features that significantly enhanced spectrum efficiency and performance in dense networks, notably OFDMA, Target Wake Time (TWT), 1024 QAM modulation, and the advanced security protocol WPA3. At the beginning of 2022, the Wi-Fi protocol received a Wave 2 recertification dubbed “Wi-Fi Certified Release 2.” The mid-gen refresh includes uplink and downlink MU-MIMO support and Spatial Multiplexing Power Save (SMPS) to improve power management.

As previously alluded to, Wi-Fi 6 has taken the role of the market leader in consumer devices. In 2022, 6 million more Wi-Fi 6 chipsets will ship for smartphones than Wi-Fi 5. For Personal Computers (PCs), the gap is 32 million in favor of Wi-Fi 6. By 2024, 2X more smartphones will ship with the Wi-Fi 6 standard compared to Wi-Fi 5, and 8X more for portable computers. Wi-Fi 6 is also positioned as the best choice for low-power connectivity in IoT devices, making it a more practical choice than both Wi-Fi 5 and Wi-Fi 7.

Wi-Fi 6E was announced by the Wi-Fi Alliance back in January 2020 and its foundation is identical to that of Wi-Fi 6. The only difference between the two protocols is that Wi-Fi 6E can also take advantage of the 6 GHz spectrum. Using an empty band like 6 GHz with large spectrum capacity means supported devices will have more bandwidth to work with and less traffic competition from other networks or devices.

Today, Wi-Fi 6E is a relatively small market opportunity, making up only 2% of total shipments in 2021 (equal to 66.2 million). However, by 2025, Wi-Fi 6E will constitute 14% of total shipments (equal to 754 million) before plateauing. So far, Wi-Fi 6E has been primarily exclusive to high-end retail routers and consumer devices due to the high development costs associated with the standard technology. For example, premium Samsung Galaxy S22 models come with Wi-Fi 6E support, while base models do not.

Wi-Fi 6E’s market potential is inherently restricted because of its timing. By the time ISPs are ready to modernize gateways/routers and consumers upgrade their devices, Wi-Fi 7 will have already hit the market. For many customers, sticking to base Wi-Fi 6 for a while and then transitioning to Wi-Fi 7 makes more sense than switching to Wi-Fi 6E now, only for it to be outdated shortly after. According to industry consultations, up to 40% of Original Equipment Manufacturers (OEMs) have considered skipping Wi-Fi 6E altogether and will shift focus straight to Wi-Fi 7 in early 2023.

The Exciting Features of Wi-Fi 7

Scheduled for an early 2024 certification by the IEEE, Wi-Fi 7 (802.11be) will push the limits of the tri-band, notably the 6 GHz spectrum band. Some of the technological evolutions accompanying the Wi-Fi 7 protocol include Multi-Link Operation (MLO) for aggregating different radio links of various frequency bands, preamble puncturing, and 4K QAM. With 320 MHz channel widths, Wi-Fi 7 devices can reach a theoretical throughput of 46.4 Gbps. These advancements make Wi-Fi 7 a perfect match for ultra-low latency applications like 8K streaming, Augmented Reality (AR)/Virtual Reality (VR), and gaming. For standard 2X2 MIMO client devices, the 5.8 Gbps theoretical throughput is more than double that of Wi-Fi 6 and Wi-Fi 6E.

At Mobile World Congress 2022, Qualcomm unveiled FastConnect 7800. This product is the world’s first Wi-Fi 7 chipset, which can achieve 2 Milliseconds (ms) latency. Shortly after, Broadcom revealed its BCM67263 and BCM6726 chips optimized for residential Wi-Fi 7 APs. Although Wi-Fi 7 won’t be certified until 2024, that doesn’t mean Wi-Fi 7-ready devices won’t hit the market during the draft phase, much like previous Wi-Fi generations. By the end of 2022, about 16 million Wi-Fi 7 chipsets are expected to ship, with that number ballooning to 58 million next year. By 2026, 545.2 million chipsets supporting the Wi-Fi standard will ship worldwide, according to ABI Research forecasts.

Premium retail vendors are advised to begin production of Wi-Fi 7 routers and mesh systems as soon as possible to be ready for abrupt demand. While the vast majority of Wi-Fi 7 users will take advantage of the tri-band (2.4 GHz, 5 GHz, and 6 GHz), an estimated 10% of all Wi-Fi 7 chipsets will be dual-band through at least 2026. That’s because the 6 GHz spectrum band is inaccessible in many regions of the world, notably Mainland China. For customers in these markets, the added cost of 6 GHz radio will not be worth it. Instead, they will want OEMs to offer dual-band Wi-Fi 7 routers that can harness all the latest technical features on the 2.4 GHz and 5 GHz bands.

Wi-Fi HaLow runs in the sub-1 GHz unlicensed spectrum band and its range is 10X wider than traditional Wi-Fi. The maximum data rate can reach 86.7 Megabits per Second (Mbps) at short distances and 150 Kilobits Per Second (Kbps) when 1 Kilometer (km) from the connection source. Long-range battery-operated IoT devices are one of the greatest beneficiaries of Wi-Fi HaLow because the protocol is highly energy-efficient, avoids the busy 2.4 GHz band, and has superb building penetration. Moreover, one AP can support more than 8,000 devices.

Even though Wi-Fi HaLow has been available for more than half a decade, the Wi-Fi Alliance only certified it in November 2021. Thus far, the Wi-Fi standard hasn’t hit it big in the consumer market. Seeing as how the technology hasn’t been deployed in consumer wireless routers and residential gateways, vendors have had little incentive to adopt Wi-Fi HaLow for devices like cameras, sensors, and other IoT devices. Australian semiconductor company Morse Micro has taken a leading role in collaborating with ISPs to incorporate Wi-Fi HaLow into consumer wireless infrastructure. Adding to the challenges, alternative technologies like TWT, which Wi-Fi 6 features, can accomplish similar functions for battery-powered IoT devices. Where Wi-Fi HaLow proves its worth in the residential space is for settings where the user needs to replace cellular for long-range, high-data capabilities, such as a barn or a guest house.

Right now, the residential Wi-Fi market is quite dispersed. Multiple Wi-Fi protocols, such as those explained in this post, are fighting for the attention of consumers. Adding to the challenge are the regional differences in spectrum support, making product development plans more difficult to lay out. To maintain a sizable slice of the Wi-Fi market, stakeholders like service providers, equipment vendors, and chipset manufacturers need to take the emerging Wi-Fi trends and shift their business strategies fittingly. 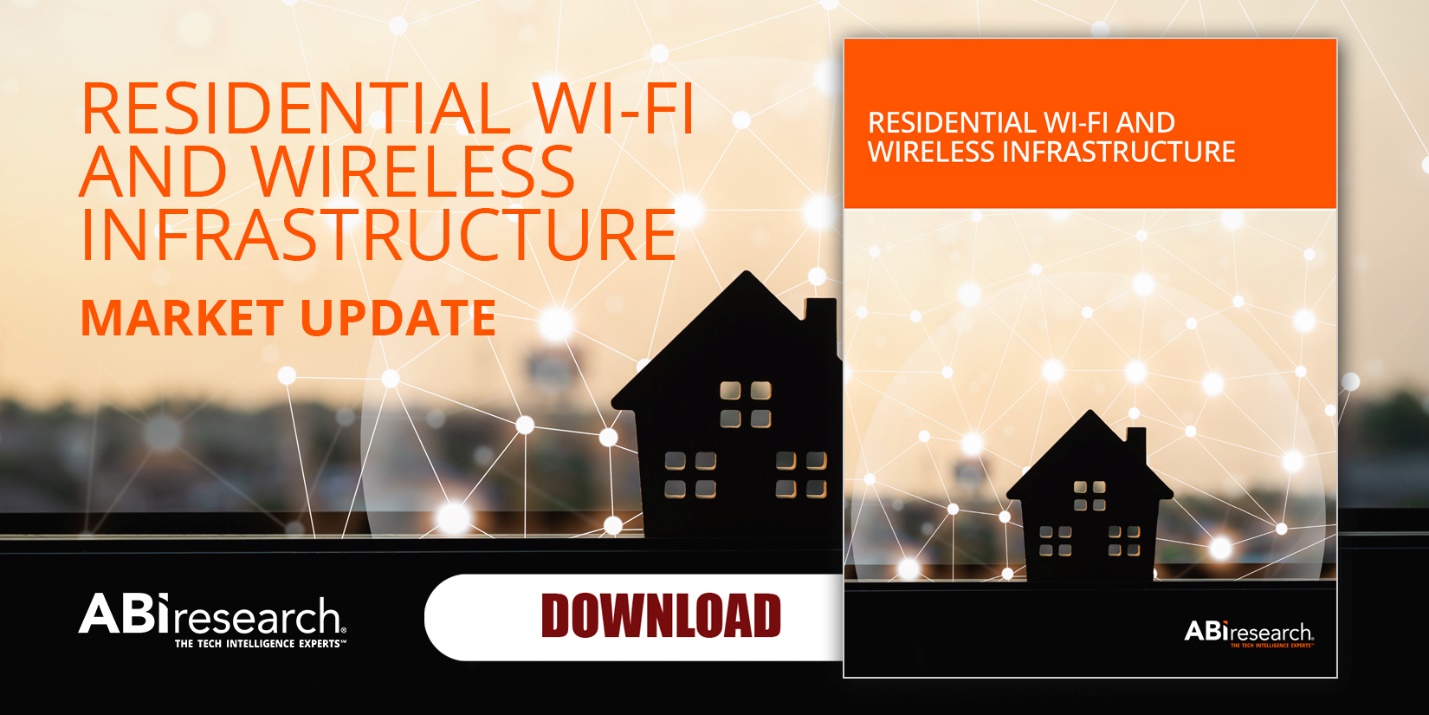 What Is Bluetooth LE and How Will It Transform the Audio Market?