Wi-Fi 6E is experiencing strong near-term demand, but faces long-term prospects of a contracted cycle. The industry must look beyond traditional strategies to handle this new dynamic.

Consumer and enterprise vendors are both reporting greater than anticipated demand for Access Points (APs) supporting Wi-Fi 6E, a protocol that many initially regarded as little more than a stopgap on the way to Wi-Fi 7. This heightened interest is, in part, a reflection of recent shifts in the industry, driven by factors ranging from service providers adapting their business models, the lasting impacts of the COVID-19 pandemic, and enterprises crying out for extra network capacity. Although Wi-Fi 6E’s value proposition is still facing considerable erosion upon the arrival of Wi-Fi 7, recent trends have renewed near-term faith in the protocol, suggesting that, ultimately, Wi-Fi 6E has become a contracted, but essential cycle for the industry.

At its core, Wi-Fi 6E is simply the extension of Wi-Fi 6 into the 6 Gigahertz (GHz) spectrum. The value proposition of the standard is based solely around this new band—without 6 GHz access, the standard offers nothing over Wi-Fi 6. Fortunately for Wi-Fi 6E, the allocation of the 6 GHz band for unlicensed use has progressed steadily worldwide, and as shown in Map 1 below, the majority of the world’s advanced economies have now adopted either the lower portion of the spectrum, spanning 5925 – 6425 MHz, or the entire 5925 – 7125 MHz spread. Recent converts include Israel, which last month followed the European Union (EU) and decided to allocate the lower portion of the 6 GHz band. Spectrum allocation today does not settle the matter indefinitely though, and the possibility remains that countries that have, to date, just released the lower portion for Wi-Fi may expand coverage to the upper portion in the future. This discussion is currently underway in Europe, where the potential of sharing the upper 6 GHz spectrum between 5G and Wi-Fi is being contemplated. A big question mark also remains concerning Mainland China, although industry sources are beginning to suspect that the fact that no proposal for the lower band having been submitted yet suggests that the country will ultimately decide to allocate this portion for unlicensed Wi-Fi usage. Given the recent trajectory of 6 GHz spectrum allocation, failing to do so would leave Mainland China as a major Wi-Fi outlier. 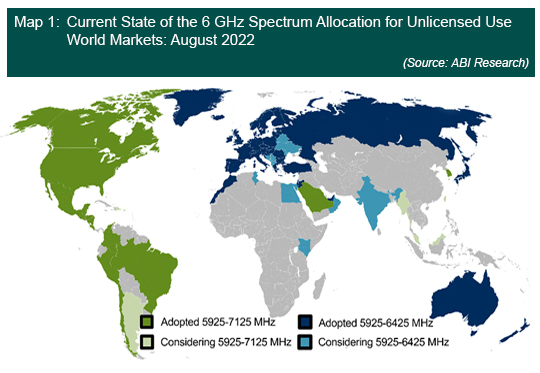 Quick action by regulators globally in unlocking of the 6 GHz spectrum laid the foundation for Wi-Fi 6E, but the favorable market conditions resulting from an industry in transition have enabled it to flourish. One of the most significant trends in the consumer market is the intensifying competition between Internet Service Providers (ISPs) to retain and attract customers on the one hand, and heightened demands from consumers for networks with greater bandwidth and coverage on the other hand. These shifts are caused by consumers who are increasingly concerned about their finances and seeking value for money, but also those who require better home connections now that they have shifted to remote/hybrid working, are relying more on in-home entertainment, and are using an increased number of devices in the home. In response, ISPs are deploying more mid- to high-range equipment with shorter churn rates, so that consumers can enjoy faster speeds and lower latencies. This trend works in Wi-Fi 6E’s favor, as it means operators cannot ignore Wi-Fi 6E and wait for Wi-Fi 7 for fear of loosing customers. Comcast is one example here, as the U.S. service provider has recently begun deploying Technicolor’s Wi-Fi 6E CGM4981 gateway branded as “Supersonic WiFi” to subscribers of its premium tier xFi Complete package for US$55 a month. The strong interest in Wi-Fi 6E Customer Premises Equipment (CPE) from North American and European service providers, in particular, has led to some Asian-based equipment vendors initially cautious about their approach to Wi-Fi 6E to reassess and expand their output.

Recent events in the enterprise market are also acting in Wi-Fi 6E’s favor. The first of these is interrupted upgrade cycles. Enterprises typically upgrade their networks every 3 to 5 years, but COVID-19-induced delays have meant that companies that may have potentially upgraded with Wi-Fi 6 in 2020 or 2021 are now undertaking upgrades during the Wi-Fi 6E cycle. Alongside this, many organizations have found that they have reached the maximum available capacity of the legacy 2.4 GHz and 5 GHz spectrum bands, and are desperate for any additional bandwidth they can get, leading them to adopt Wi-Fi 6E for 6 GHz today, rather than hold out several more years for Wi-Fi 7. Even those that don’t currently have Wi-Fi 6E devices on their network are opting for 6 GHz-enabled APs to future-proof their business for a time when 6 GHz reaches high penetration rates. Vendors such as Cambium Networks have created APs with software-defined radios (which can alternate between different bands depending on demand) to service this demand.

Rapid spectrum allocation, shifts in consumer habits, and greater network demands have spurred the rapid adoption of Wi-Fi 6E, but momentum of the standard will slow significantly upon the arrival of Wi-Fi 7, with the first devices to begin hitting the market in mid-2023, and an official release of the protocol scheduled for 1Q 2024. Prior to Wi-Fi 7, Wi-Fi 6E’s value proposition was that it was the only option for accessing the newly allocated 6 GHz spectrum, which offers greatly expanded bandwidth and far superior latencies for consumers and enterprises. This differentiator from its predecessor Wi-Fi 6 will dissipate once Wi-Fi 7 APs arrive, as this later standard will not only offer 6 GHz support, but also promises many other technical advancements beyond Wi-Fi 6, notably Multi-Link Operation (MLO), which promises to greatly improve spectrum efficiency. Due to the radio being the most expensive component of an AP, it is not possible for vendors to produce low-cost versions of Wi-Fi 6E APs, which necessitate a minimum of three radios in order to support the 6 GHz band alongside the legacy 2.4 GHz and 5 GHz bands. Because of this, the price differential between similarly featured tri-radio Wi-Fi 6E and tri-radio Wi-Fi 7 equipment will be relatively marginal, meaning that there will be a quicker migration toward Wi-Fi 7 than has been witnessed in the transitions between previous protocols. At the lower end, the inexpensive dual-band market will predominantly remain with Wi-Fi 6, essentially leaving Wi-Fi 6E without a core market.

Strong demand for Wi-Fi 6E in the near term, but with long-term prospects of a contracted cycle, is a new dynamic with which the industry must grapple. For equipment vendors, the comparatively swift transition between Wi-Fi 6E and Wi-Fi 7 is something that they should begin preparing for immediately. As outlined above, Wi-Fi 6E’s value proposition will quickly degrade once Wi-Fi 7 is released, as purchasers will gravitate toward low-cost dual-band Wi-Fi 6 or tri-radio and above Wi-Fi 7 equipment. Thus, although demand for equipment supporting the standard is currently high, vendors that have yet to design and launch Wi-Fi 6E APs should not make plans to do so, and would do better to instead focus their energies on becoming early suppliers of Wi-Fi 7. Vendors with Wi-Fi 6E APs in their roadmap should ensure that new models are released no later than 2024, or else their success in the market may be limited by the emergence of Wi-Fi 7.

ISPs, on the other hand, need to account for the near- and long-term demand for Wi-Fi 6E in the home. It is recommended that ISPs that have not already done so should look to deploy Wi-Fi 6E APs as part of their higher-tier offerings within the next 12 months. Their confidence in the standard should be reinforced by the rapid expansion of commercially available Wi-Fi 6E devices witnessed in 1H 2022, with just shy of 80% of the current total of 792 being introduced in the first two quarters of this year alone. Adoption of Wi-Fi 6E in portable PCs is particularly pronounced, with ABI Research forecasting that this year 24.5% (59.3 million) of all Wi-Fi chipset shipments for portable PCs will support Wi-Fi 6E, increasing to just over 50% (99.6 million) in 2025. In 2025, the preponderance of Wi-Fi 6E over Wi-Fi 7 will be mirrored in many other consumer electronics, with 25.7% of shipped smartphones equipped with Wi-Fi 6E, compared to just 11.9% for Wi-Fi 7. Wi-Fi 6E tablet shipments will outnumber those for Wi-Fi 7 by almost 3X. For all three of the above, Wi-Fi 7-enabled shipments will not supersede Wi-Fi 6E until 2027, with the installed bases not flipping for several years thereafter. These figures should provide reassurance to ISPs seeking to deploy Wi-Fi 6E APs that Wi-Fi 6E demand in the home will persist for many years to come.

Finally, enterprises looking to upgrade their networks in the next 12 to 18 months should not be perturbed by the contracted Wi-Fi 6E cycle, as it will still be many years before Wi-Fi 7 will fully mature. In many ways, 2023 for Wi-Fi 7 will be the equivalent of 2018 for Wi-Fi 6, with the first high-end devices hitting the market while the standard is still in the draft stage. The year 2024 will see an array of early premium devices accompanying the final release of the 802.11be standard, but it won’t be until mid-2025, at the earliest, that a broader ecosystem of Wi-Fi 7 APs will become available. With this in mind, organizations working with traditional enterprise upgrade cycles should still feel confident in upgrading to Wi-Fi 6E in the near term, as the alternative is a 3 or 4 year wait for a mature Wi-Fi 7 ecosystem that can satisfy their requirements to develop. This is the calculation being made by many organizations at present. For example, consider the recent Wi-Fi 6E deployment record set by the University of Michigan, which, in July, installed more than 16,000 new Wi-Fi 6E APs across its campus. Finally, as many of the advancements of Wi-Fi 7 over Wi-Fi 6E are at the software and not the hardware level, some vendors, including Huawei, are planning to use software updates to deliver select benefits of Wi-Fi 7 to existing Wi-Fi 6 or Wi-Fi 6E equipment. This potential is something that enterprises should make note of and inquire about when sourcing their Wi-Fi 6E equipment.