ABI Research predicts Android is set to face a greater challenge for market share in the smart watch segment once Apple’s new device becomes available in 2015. ABI Research forecasts Android’s total market share of smart watches to fall below 50% for the first time since the smart watch renaissance of September 2013, which saw several new devices launched on the platform. iOS is set to take a significant 50% share. The number of Android based wearable devices shipped by the end of 2014 will hit around 6 million, with this figure set to rise to 15 million in 2015.

“Android has enjoyed unprecedented success within this market with products such as the Samsung Gear series and Sony smart watches; however, the Apple Watch will pose a significant threat,” commented Thomas McCourtie, Research Analyst, ABI Research.

“Judging by the previous sales performance of newly released Apple products, ABI Research anticipates a high number of sales of the Apple Watch upon its initial release. The iPad sold almost 5 million units during the first two quarters of release (2Q 2010 and 3Q 2010), and the Apple Watch will be no exception.The high number of loyal and affluent multiple Apple device owners alone will drive significant numbers of sales,” added McCourtie. 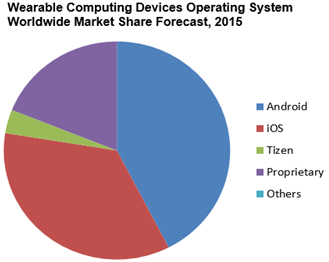