While many industries felt the intense ramifications of the global chip shortage, the government issued ID space has been mostly spared because vendors recognize the importance of citizens obtaining proper IDs and because the market is contract-based. Plus, the demand for IDs hasn’t exactly been soaring given travel restrictions, which is the driving factor behind purchasing a passport. However, as restrictions lift and people begin to travel and go out more, demand for smart ID cards will increase, presenting an emerging challenge in a world where chip supply isn’t expected to fully recover until late 2023 at the earliest.

There’s clear evidence that the government ID market is gravitating toward smart solutions. Although just 38.5% of physical ID shipments in 2021 are smart, by 2026, smart and legacy shipments will reach parity.

Why Is There a Semiconductor Chip Shortage?

There are three key reasons why there is a semiconductor chip shortage in the world:

With COVID-19 spreading ferociously, governments around the world enforced lockdowns that halted manufacturing productivity. At the same time, demand for chips increased exponentially as more people worked, learned, and were entertained from home. The Integrated Circuit (IC) foundries manufacturing the chips simply could not meet demand.

In late 2020, as the United States and China foresaw impending chip shortages, each country bought up large stockpiles, contributing to less availability for the rest of the world.

Moreover, between 2020 and 2021, several unforeseen events disrupted the market. Two semiconductor factories in Japan were shut down due to fires and one in Austin, Texas was closed after a severe winter storm. Additionally, Taiwan faced a drought, which limited the production of purified water needed for the manufacturing process.

Lastly, materials for chips, such as copper, have increased by 60% to 70% since 2019, while the price of plastics like Polyvinyl Chloride (PVC) has increased by 50% since 2021. As a result, these price increases are reflected in increased prices for the buyer.

Chip Shortage Influence on the Cost of Government Issued ID

Given the contract-based nature of the government issued ID market, price has not been a problem for most institutions issuing smart ID cards. With a long-term fixed price throughout the length of the contract, it’s the chip suppliers that take on the losses for now. Based on findings from ABI Research, semiconductor chips cost, on average, 15% more than before the pandemic.

A new baseline price has been established and is not expected to ever return to pre-pandemic levels. Therefore, the higher price points will be reflected in new contracts. In scarce circumstances, prices for chips used for personalized government issued ID personalization have increased 300% to 500%, which will be an enormous challenge once existing contracts end. For these reasons, it’s new projects that will be placed on the backburner for some governments, especially in price-sensitive regions.

IC vendors are expected to strongly favor governments as volume demand increases amid the shortage crisis. With only so much supply, foundries will choose to do business with customers that bring the most profitability. And because the smart credentials of government issued IDs require chips on the high spectrum of price, foundries will simply make a sound business decision.

Another factor is that many Asian foundries are state-owned. Under government guidance, preference is shown toward supporting the development of smart government issued IDs.

Across every region, expenditure for smart credentials is going to increase, while expenditure on legacy credentials stagnates, or even disappears altogether. In North America, the two driving forces of smart credential adoption in the governemtn issyed ID domain comes from driver’s licenses and passports. Between 2019 and 2026, the driver’s license segment will grow at a Compound Annual Growth Rate (CAGR) of 8.9%, and the passport segment will grow at a CAGR of 9.2%. Meanwhile, the CAGR across all verticals will hover around 0% and, in some cases, will reach a negative figure. 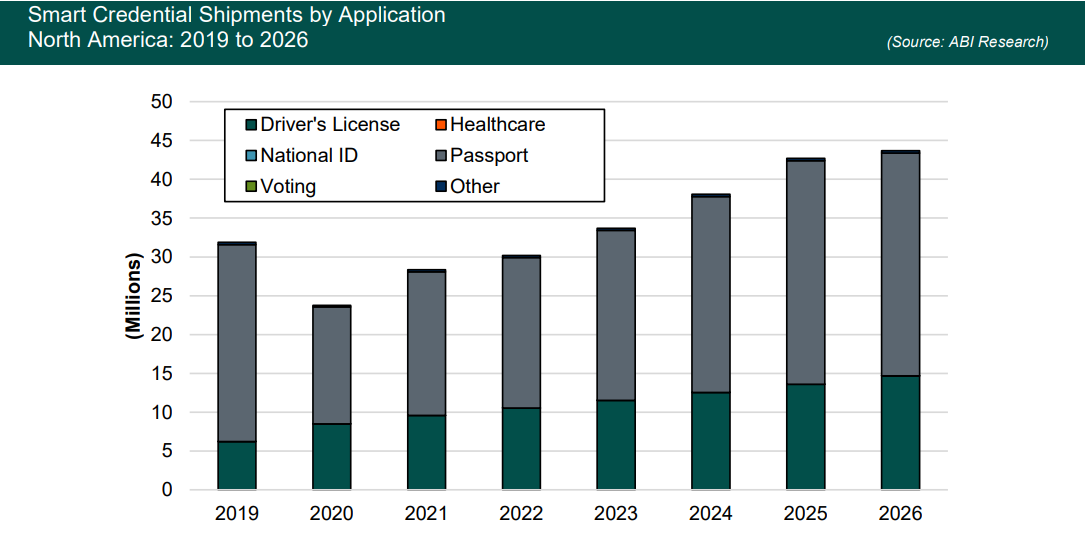 In Europe, passports and national ID are the two biggest applications of government ID with smart credentials, and they will grow at an 8.3% and 8.9% CAGR, respectively, from 2019 to 2026. Interestingly, healthcare smart IDs application will see a CAGR of -9.7%.

The takeaway from Latin America is the breakaway from legacy passports provided by the government, as it will see a CAGR of -100%. And smart credential adoption for government issued passports will grow at a CAGR of 12.1%.

While passports and driver’s licenses are going to see the greatest number of smart credential shipments between 2019 and 2026 in Asia-Pacific, it should be noted that healthcare smart IDs are going to see modest growth with a CAGR of 6.8%.

In the Middle East & Africa, all applications, except for voting, will see an increase for smart credentialed government ID in the coming years. Passport and healthcare IDs will lead the way for shipments in the region.

Between pandemic lockdowns relieving demand for IDs and having the luxury of being locked into long-term vendor contracts, the market for physical government issued IDs has generally been safe from the global semiconductor chip shortage. IC foundries will recoup the losses by permanently increasing prices, making price-sensitive governments think twice about smart ID contract renewals.

While a mobile ID solution would be more convenient, the mobile market is not mature enough to handle the demand. Governments will continue to focus on chip-based citizen IDs.

For governments with contracts that have expired or are going to expire soon, decision makers will need to carefully consider if delaying a new project is worth it, considering the “new normal” involves a new baseline price for chips. Even if price isn’t an issue, lengthy lead times due to the global supply chain disruption could be a point of contention if volume can’t be met. Otherwise, governments may seek end-to-end providers or simply wait until the global supply chain normalizes.

To learn more about the relationship between the chip shortage and the development of government, download ABI Research’s The Impact of the Global Chipset Shortage on Citizen Digital Identities analysis report. This report is part of the company’s Citizen Digital Identity research service, which includes research, data, and ABI Insights. 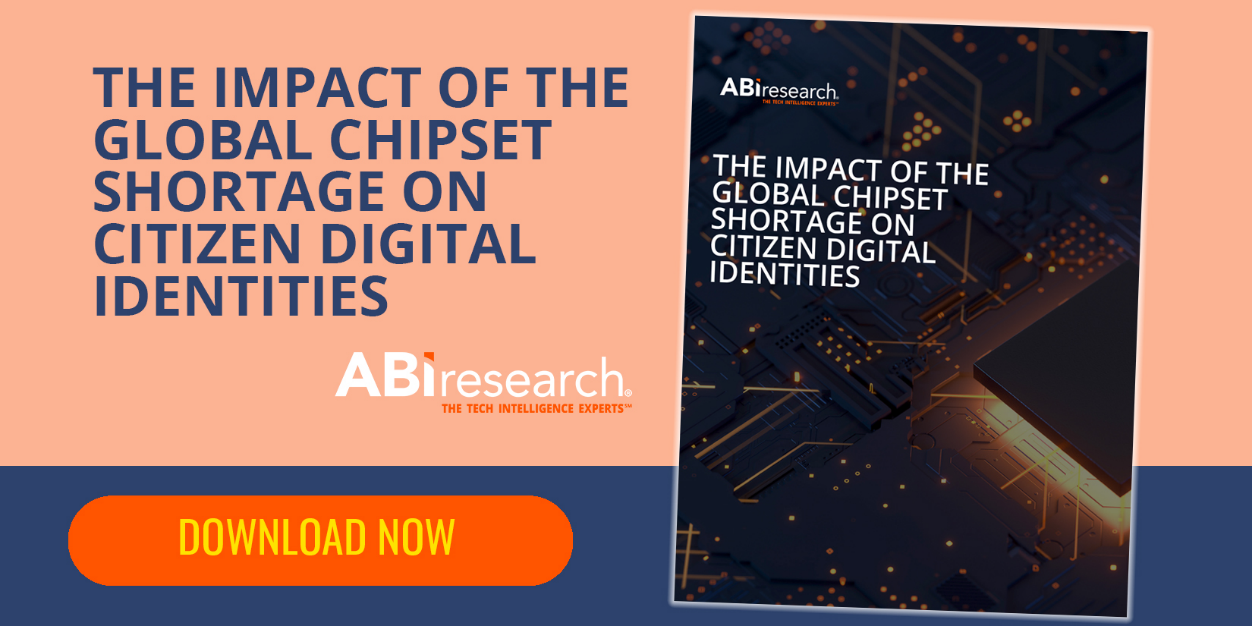