5G Infrastructure: What Connectivity Will Look Like in 2021 and Beyond

It may seem long overdue to declare, but 5G is finally beginning to establish itself as a primary cellular communication technology. Mobile operators are expanding their networks across several global regions, including North America, Western Europe, and Asia-Pacific. In China, operators have ramped up deployment of New Radio (NR) base stations, with others now relying on Standalone (SA) mode, where NR is no longer tethered to Long Term Evolution (LTE). This has opened the door for network slicing, edge computing, and increased automation. As 5G develops as an SA network, it will introduce three new advancements: a Service-Based Architecture (SBA), native support for network slicing, and a control plane/user plane split.

In this architecture, services interact with other services across different Application Programming Interfaces (APIs). The underlying premise of an SBA is service atomicity, which is the ability for services to run in isolation from concurrent processes. By extension, an SBA is conducive to a 5G network that is reduced to being more granular and decoupled, all of which is associated with several benefits:

Control and User Plane Separation (CUPS) was introduced as part of The 3rd Generation Partnership Project (3GPP) Release 14 standard and is a key pillar for 5G Core Networks (CNs). The utility of CUPS lies in the separation between the control and user plane, with the latter able to be scaled independently of the former. The control plane can be hosted in a centralized function, whereas the user plane can be placed close to edge locations. This arrangement avoids the need to backhaul traffic to a central location, thereby improving latency and bandwidth requirements for applications like video, connected cars, and other enterprise vertical use cases.

CUPS aids deployment of 5G core elements across both public and private clouds, in turn paving the way for economic gains. At peak times, traffic can be scaled to the public cloud. Off-peak Mobile Service Providers (MSPs) can scale back to the private cloud. Cloud-native Network Functions (NFs) for management, data, service, and latency-insensitive designs can now be hosted in multiple cloud platforms, such as Amazon Web Services (AWS), Azure, third-party OpenStack, a vendor’s own cloud, or a combination thereof. Also, CUPS is conducive to a centralized Operations and Management (O&M) configuration in which one control plane resource pool configures and controls several user plane pools, in turn simplifying network configuration.

Signaling is one of the most critical components of cellular networks and has remained a topic of debate since the first digital network was deployed. When Signaling System No. 7 (SS7) could not handle data-oriented and packet-based calls in LTE networks, Diameter saved the day, but that will not be the case in 5G SA networks due to the following reasons: 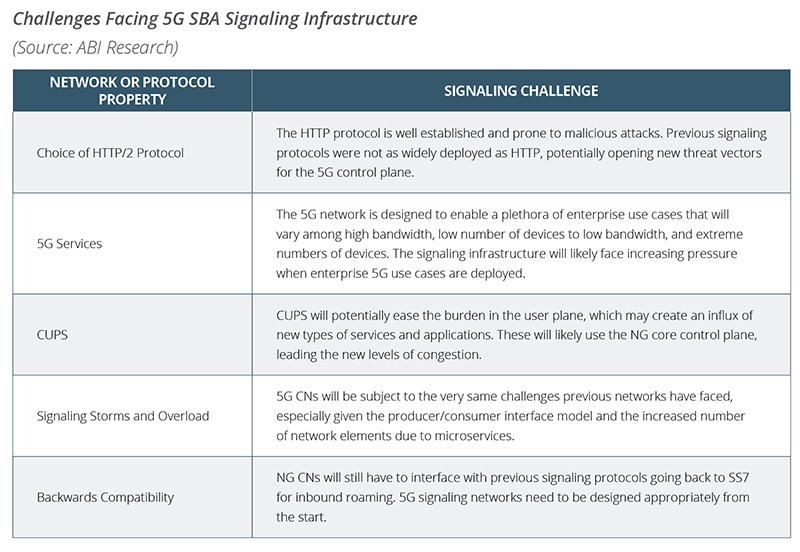 With 5G, you have to be able to react and scale faster so you can outpace 5G signaling explosions, as well as security attacks. Signaling is the brains of the control plane. To help govern signaling, routing, policy, and charging with the SBA, Oracle Communications provides the complete set of microservices-based cloud-native NFs to help operators design a reliable signaling and routing strategy to enable elastic growth, interoperability, and rapid introduction of new services in its network.

Oracle Communications’ signaling and routing portfolio is designed as microservices and is based on cloud-native principles. It integrates seamlessly with Oracle Communications’ Automated Test Tool and Script for automating the testing of 5G NFs. The signaling and routing NFs are designed on the principle of best-in-class technology with laser focus on quality and security parameters. The NFs can be readily deployed in a customer’s environment, support logging and tracing, and integrate easily with DevOps workflows and operators’ Continuous Integration (CI)/Continuous Delivery (CD) pipelines.

Oracle Communications’ Service Communication Proxy (SCP) not only resolves the challenges introduced by the 5G SBA, but also optimizes signaling controls. It provides service providers with better visibility into the CN by performing the following:

Signaling infrastructure remains one of the most critical parts of any mobile network, reinforced by the emergence of 5G, with enterprise services and critical communications expected to generate revenue for mobile operators and the entire supply chain.

Mobile operators should revisit and calibrate their signaling infrastructure strategies, while 5G enterprise use cases or SA mode remain somewhat nascent. Planning for a signaling platform that can scale to include hundreds of different use cases—and services we cannot yet fully understand—will be an “all-hands-on-deck” effort.

Download ABI Research’s Importance Of Signaling In 5G whitepaper to learn more about how, despite 5G’s long-awaited mainstream arrival, the connectivity challenges that operators ultimately face will not be easily overcome.