The latest rumor in telecom M&A arena has French conglomerate Bouygues in a hot bid for Vivendi’s SFR.   A tie-up like this will result in the largest mobile Telecom in France.  How does this concentration of market power measure up, and what will the regulator say?

Let’s look at market share before (blue) and after (red) any such acquisition.   The resulting telecom giant represents nearly 50% subscriber market share – enough to alarm the anti-trust regulators. The resulting duopoly with Orange would control nearly 90% of French mobile telecom subscribers - not a good sign. 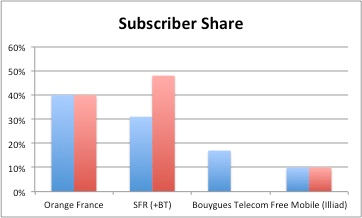 Now look at the Herfindahl-Hirschman Index as measure of market power concentration.  Though this is used by the U.S. Department of Justice, it is still reasonable to help understand where to French regulators might rule on any such proposal.  Looking at the subscriber base and the resulting concentration, we see the  HHI increasing from 2950 to a staggering 4004.  This change in market power concentration goes beyond the ill-fated AT&T acquisition of T-Mobile US. 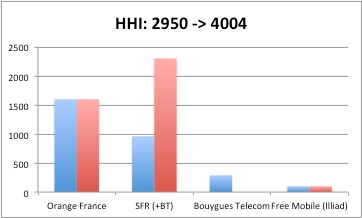 This is yet another example of the economic pressure observed by the Rule of Three and Four that may not gain regulatory approval.  Proponents of an acquisition of SFR by Bouygues should prepare for serious headwinds.