As the 6 GHz Spectrum Battleground Heats Up, What Could Further 6 GHz Allocation Mean for Wi-Fi in Europe?

Would the opening up of additional 6 Gigahertz (GHz) spectrum in Europe lead to new opportunities for Wi-Fi based technology?

Regulators around the world are currently engaged in one of the most consequential debates in recent years—whether to allocate the 6 Gigahertz (GHz) band for unlicensed or licensed use. The outcome of these decisions will have profound implications for the long-term future of Wi-Fi technology, as the 6 GHz spectrum is fundamental to many of the major innovations in the next generation of Wi-Fi standards, Wi-Fi 6E and Wi-Fi 7. Leveraging the 6 GHz band for Wi-Fi will not only provide the technology with much needed extra capacity, but also higher throughput, increased reliability, greater determinism, and reduced latency. This will enable new innovations across a variety of use cases within consumer, enterprise, and industrial environments. Figure 1 displays the current allocation of the 6 GHz spectrum for unlicensed use at the country level. The countries highlighted in dark green, including the United States, Canada, Brazil, Costa Rica, Colombia, Peru, Guatemala, Honduras, South Korea, and Saudi Arabia, have adopted the full 1.2 GHz (5925 – 7125 Megahertz (MHz)) for unlicensed use. This allocation will allow them to benefit from an enormous boost in available spectrum (double that previously available with legacy bands), and positions them to be able to exploit the full potential of Wi-Fi 7’s new features once its adoption proliferates. Mexico is also expected to announce that it will release the entire 6 GHz band in the near future. In contrast, continental Europe, the United Kingdom, Australia, and Japan have instead opted to open just the lower 6 GHz band (5925 – 6425 MHz). India and Egypt are also considering adoption of the lower 6 GHz band in the future.

Some countries that have already released the lower portion of the band are now in the process of deciding how best to proceed with the upper 6 GHz band (6425 – 7125 MHz) allocation. This is the case in Europe, where the European Union (EU) released the lower portion of the 6 GHz spectrum for Wi-Fi in June 2021, and European regulator European Conference of Postal and Telecommunications (CEPT) is now undertaking consultation on expanding coverage into the upper portion. Meanwhile, U.K. telecoms regulator Ofcom announced in June 2022 that it was also continuing to assess whether high-power licensed mobile or a license exemption could be a suitable use of the band, and that it was analyzing the impact of each use on incumbent users. This comes after the regulator abandoned a previous proposal for shared access licenses in February 2022 due to lack of interest from key stakeholders on both the licensed and unlicensed sides of the debate. This ABI Insight aims to provide some guidance on the market opportunities for 6 GHz within Europe, how quickly it will be adopted from a device and installed base perspective, and a map of the potential transition toward full 6 GHz band adoption if made available over the next few years. 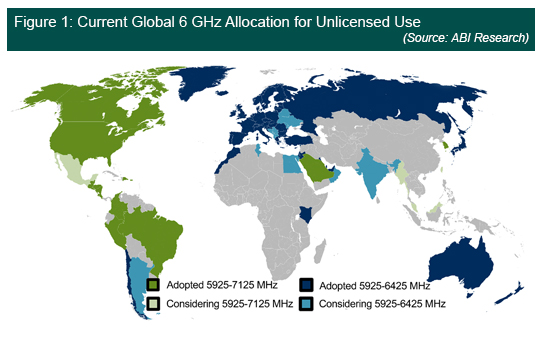 The availability of additional 6 GHz spectrum has the potential to unleash the full potential of Wi-Fi over the next decade. By 2027, ABI Research forecasts that approximately 30% of all Wi-Fi chipsets globally will support the 6 GHz band, growing from around 2% in 2021, as the market increasingly transitions to support Wi-Fi 7, the first devices of which are expected to ship as early as next year. By allocating additional 6 GHz spectrum, it would be possible to maximize the potential of Wi-Fi 7, enabling wide 320 MHz channels, and the aggregation of different frequency bands with Multi-Link Operation (MLO).

As the debates over 6 GHz spectrum allocation rage on, ABI Research has conducted a case study analysis to determine what impact allocating the upper portion of the 6 GHz band for unlicensed use could have on Wi-Fi adoption in Europe. Using Europe as an example could potentially provide some insight into how swiftly other regions around the world could support full band 6 GHz Wi-Fi solutions at both the networking and terminal levels over the next decade, and the potential installed base of 6 GHz solutions at this time. For the purpose of this study, ABI Research has selected 2024 as a potential time frame for the full 6 GHz band allocation to be granted in Europe, enabling a transition to full band devices thereafter.

First, at the global level, ABI Research forecasts that there will be approximately 6.7 billion annual shipments of Wi-Fi-enabled devices by 2030, nearly doubling from 3.5 billion in 2021. Europe is expected to account for 23% of the total Wi-Fi device market by 2030, reaching more than 1.5 billion Wi-Fi-enabled device shipments. This has been calculated based on regional forecasts of Wi-Fi-connected devices across both networking and client/terminal devices. As Table 1 shows, the majority of this will come from terminal devices, such as smartphones, tablets, Personal Computers (PCs), smart homes, home entertainment, wearables, and other Internet of Things (IoT) devices. Meanwhile, networking equipment, such as consumer Access Points (APs), enterprise APs, and mesh routers, is also expected to grow from 63 million units in 2021 to more than 93 million by 2030.

As Table 2 shows, this will equate to a growing installed base of active Wi-Fi-enabled devices in Europe, reaching nearly 300 million networking devices and more than 4.2 billion terminal devices. Lifecycle considerations of different device types have been taken into account, with networking infrastructure traditionally having a much longer lifecycle than a consumer smartphone, tablet, or wearable device. As a result, the forecasts only contain active devices in the market.

Table 3 shows Wi-Fi-enabled device networking and terminal device shipments for Europe split between the three major spectrum categories. This includes the legacy 2.4 GHz and 5 GHz bands, lower band 6 GHz, and full band 6 GHz. While 2.4 GHz and 5 GHz continue to dominate the market today, the availability of the lower 6 GHz band in Europe will lead to accelerated adoption of Wi-Fi 6E and Wi-Fi 7 solutions in the coming years, with 11 million lower-band 6 GHz networking devices and 160 million terminals projected to be shipped to the European market in 2025. If we assume that the full 6 GHz band could be made available for unlicensed use in Europe in 2024, from 2025 onward, the market could begin to transition toward full band 6 GHz, with significant ramp up expected from 2027 onward, as an increasing number of Stock Keeping Units (SKUs) are made available with access to the full band. By 2030, ABI Research would expect around 80% of 6 GHz device shipments to have transitioned to support the full 6 GHz band, equating to 44 million networking devices and 386 million terminals. Combined, lower and full 6 GHz adoption would grow from less than 1% of European networking device shipments to nearly 60% by 2030, while over one-third of European Wi-Fi terminal shipments would be expected to support 6 GHz. 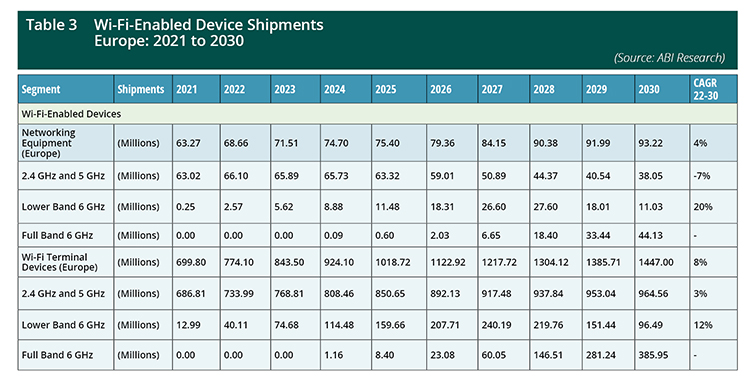 As Table 4 shows, in terms of the impact on the active installed base by the end of the decade, ABI Research forecasts that there will be an almost even split between the active installed base of 2.4 GHz/5 GHz-only networking devices versus 6 GHz networking devices in Europe. By 2030, the full band 6 GHz installed base will have overtaken the lower 6 GHz band installed base, approximately 5 years after the first devices arrive en masse. On the terminal side, the active installed base of lower and full 6 GHz band devices in Europe will have reached nearly one-quarter of the market. While this number may appear low in contrast to networking equipment, this is due, in part, to the emergence of many Wi-Fi devices within the smart home, wearable, and other IoT markets that are not likely to require 6 GHz Wi-Fi, but instead will be able to take advantage of lower-cost 2.4 GHz-only or dual-band 2.4 GHz and 5 GHz to support these high-volume applications. In contrast, devices that require high throughput, low latency, and greater reliability will tend toward 6 GHz Wi-Fi 7 adoption. This would include smartphones, tablets, PCs, smart televisions, and Virtual Reality (VR) headsets, to name but a few. In terms of the split between lower and full band 6 GHz, full band 6 GHz would grow from around 3% of the terminal installed base in 2025 to around 62% by 2030. 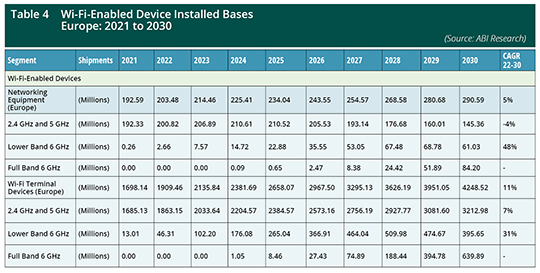 The above exercise is aimed at demonstrating how quickly 6 GHz devices will roll out across the board, while also providing some guidance on the potential transition to full 6 GHz band adoption if it were to be granted around the 2024 time frame. Of course, discussions are still underway, and there is still the prospect that regulators will choose to share the upper band between 5G and Wi-Fi. This study is particularly timely, as barely over a month ago, on September 14, Chile’s telecom regulator SUBTEL voted to revise its stance on the 6 GHz spectrum, reducing access from the entire spectrum to just the lower portion. This was driven by a national 5G strategy, alongside limited 6 GHz Wi-Fi 6E adoption to date. However, these forecasts highlight the considerable potential of 6 GHz adoption in Europe in the coming years, and how quickly the market could transition to the full band should it be granted.

Ultimately, leveraging the full 6 GHz band could provide enormous performance benefits to Wi-Fi networking equipment and terminal devices in the future. This was further demonstrated in September by Broadcom and Intel, which delivered the industry’s first cross-vendor Wi-Fi 7 demonstration using an Intel laptop and a Broadcom tri-band AP. Throughput speeds of 5 Gigabits per Second (Gbps) were achieved using 320 MHz channels on the 6 GHz spectrum, more than double the 2 Gbps currently possible with Wi-Fi 6E. Not only did this demonstrate that Wi-Fi 7’s core features are finalized and operational, reinforcing expectations that the first devices supporting the protocol will arrive in the near future, but that opening up the full 6 GHz spectrum could lead to much wider usage of 320 MHz channels, thanks to its extremely high performance. In regions where only the lower band is proposed, devices will be restricted, for the most part, to 160 MHz, limiting the potential performance. In conclusion, if Wi-Fi, and Wi-Fi 7 in particular, is to reach its full potential over the next decade, telecoms regulators globally must work to harmonize 6 GHz access, ideally releasing the full 1200 MHz of the band worldwide. This will help drive a new wave of wireless innovation in a wide range of devices, including enhancements to existing markets, such as smartphones, tablets and PCs, low-latency VR headsets, and Time-Sensitive Networking (TSN) within industrial environments.