While 5G deployments and news coverage have been the focus in the past years, satellite communications have built momentum. In ABI Research’s recent whitepaper (Key Takeaways from MWC 2022), it was highlighted how the Mobile World Congress (MWC) 2022 welcomed several satellite companies (e.g., Intelsat, Fossa Systems, and Sateliot) and the future emergence of Narrow-Band Internet of Things (NB-IoT) protocol to be used for satellite communications, bringing the terrestrial and non-terrestrial closer.

Satellite communications are being positioned as a Non-Terrestrial Network (NTN) solution, an integral part of 3GPP’s Release 17, playing an important role in the future of communications networks evolution. While the future communication network is still a work-in-progress, some companies have attempted to dip their toes into defining 6G. For example, NTT DoCoMo sees 6G as expanding beyond the “three 5G requirements” (eMBB, mMTC, and URLLC) in 5G, effectively doubling to “six requirements”: extreme low latency, extreme high reliability, extreme massive connectivity and sensing, extreme low energy and cost, extreme high data rate, and extreme coverage extension. One such requirement is the extension of coverage beyond the traditional terrestrial cellular coverage areas (CBDs, urban, suburban, and some rural locales) and onto sea, into the sky, and to remote rural spaces. This is where solutions such as geostationary satellite (GEO) and low-earth orbit satellites (LEO) come into play to match the varying requirements in use cases (e.g., low-latency or wide-coverage).

Mobile Network Operators (MNOs) have realized that satellite communication is not a competing force but a complementary force necessary in the future of networks. As such, MNOs are in search for a way to incorporate satellite and other non-terrestrial networks into their strategy. NTT DoCoMo, for example, has incorporated NTNs in its study on “5G Evolution and 6G”, which highlighted the role that NTNs play. Softbank Corporation, the mobile operator for Softbank Group, is a heavy proponent of the use of NTNs in mobile communication network with solutions it acquired or invested in (e.g., Skylo, OneWeb, and HAPS). Additionally, O2 has also collaborated with the European Space Agency (ESA) to explore solutions for Connected and Autonomous Vehicles (CAVs). 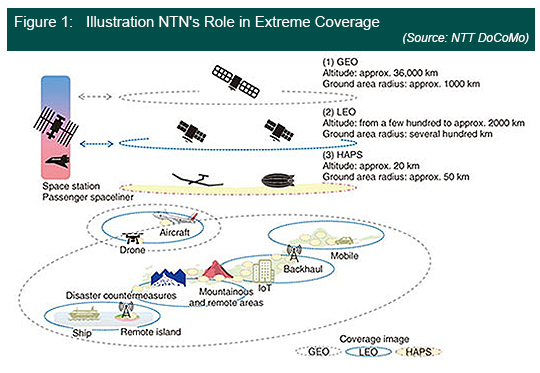 As satellite and other non-terrestrial solutions are increasingly forming an essential part of the communication network, it is necessary to make provisions for them and enable future innovations. And at ITU’s World Radiocommunication Conference 2019 (WRC-19), it did exactly that and came to a collective agreement. WRC-19 identified the 26 GHz (24.25 – 27.5 GHz) as the spectrum band for global harmonization while ensuring the satellite industry received their required allocations and protections.

Investments are being into Research and Development (e.g., in the 28 GHz band) as efforts to enhance satcom’s capabilities should not be wasted due to competing industries’ interests. Satellite communication (SatCom) has its advantages in certain environments and plays a crucial role for our global economy. SatCom has its strengths in:

Spectrum is a finite resource, and industries must make the best use of it. As such, it is crucial that provisions and protections be made for different wireless communication technologies. This ensures the continuity of technological development and innovations which could sprout from it. Therefore, it is crucial for the satellite communication industry to have their access, provisions, and protections to spectrum assets.