The first North American 6G vision from ATIS’ Next G Alliance aims to promote its regional leadership alongside other global rivals. Meanwhile, it will open opportunities for the domestic market in various areas such as public safety and healthcare, as well as funding startups to encourage innovation.

Alliance for Telecommunication Industry Solutions (ATIS), a standards organisation for the Information and Communcations Technology (ICT) industry in the USA, launched Next G Alliance in October 2020 as an initiative to advance North American wireless technology leadership over the next decade through private-sector-led efforts. The action group includes multiple stakeholders from the US industry, government, and academia with shared commitments for the mission and goals.

In early February 2022, the alliance released the Roadmap to 6G report presenting an in-depth overview of 6G vision for North America and the Launch Event followed later in the month. The Next G Alliance has identified six audacious goals describing North America’s priorities and ambitious for 6G systems: 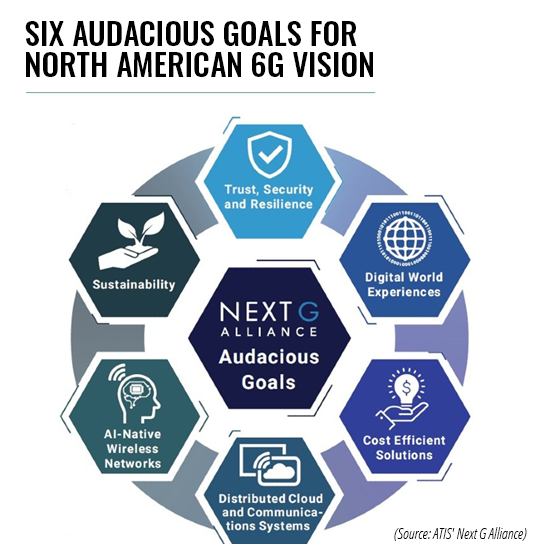 According to the Launch Event presentations, North America has societal and economic needs as the top concern in the 6G vision roadmap, which could make some differences from other regions. For example, China focuses on developing core technologies in building 6G network architecture as well as in manufacturing and production value chain, e.g., chipsets, new materials. Japan intends to fund private sector research and development for 6G and builds international partnership to boost its competitiveness. For example, it has launched a bilateral partnership with Finland to develop 6G technologies and standards, and another partnership with the USA on international standards in unmanned technology on 6G. South Korea has set the target to launch the world’s first commercial 6G network in 2028. Leading vendors Samsung and LG Electronics have demoed some 6G research results such as power amplifier to support beamforming in terahertz spectrum. The European Union (EU) also launched a 6G flagship project, Hexa-X, to develop advanced technologies and to help address United Nations (UN) and European Sustainable Development Goals (SDGs), which has more similarities with the North American vision.

Calling from sustainability, North America will address climate change in 6G with continuous development on global energy measurement standards, energy saving techniques, and renewable energy adoptions. Meanwhile, it is expected to build sustainable local communities which means improvements on public services (e.g., healthcare, city operations, aging population living quality). In 5G, most of the applications focus on the industrial section which has desires for efficiency in productivity and better completeness of digitalization. However, public services are challenging adopt 5G applications due to low profit return and low digital foundation. North American 6G vision expects wide access for the whole community to 6G applications with further reducing the cost of network facilities.

When considering the future growth of 6G development, public safety will be key enterprise opportunities. In line with the top audacious goal of Trust, Security, and Resilience, government has initiatives for private sectors to develop public safety communications technologies. For example, National Institute of Standards and Technology (NIST), a government agency which promotes U.S. innovation and industrial competitiveness, has launched a Public Safety Innovation Accelerator Program 2022 (PSIAP-2022) to offer US$5 million and follow-on investments for startups. Operators should monitor innovation in this area and partner with public safety solution providers for future commercial launches. What's more, 6G can offer first responders a solution acting in emergencies and disasters. During natural catastrophes, such as tsunamis or earthquakes, communications infrastructure is often destroyed or damaged which makes it difficult for rescue teams and citizens inside disaster to call for help. 6G connected with satellite and airborne drones could provide a resilient access for ground users. Moreover, 6G enabled auto-pilot vehicle could be the next economic boom, similar as smartphone and flourish "app economy" as witnessed in last decade. Particularly, safety related with autopilot and data privacy security associated is an area with great growth potential.

Harnessing the power of 6G holds enormous potential for healthcare. According to Jessamine Chin from VMware, the Societal and Economic Needs Working Group Chair in the Next G alliance, 20% of the US economy is spent on healthcare with costs as twice as in other countries. Therefore, urgent needs and economic benefits exist in healthcare and well-being applications for reducing cost and disparities in accessing healthcare resources. Low latency telecommunication provides real-time HD video for diagnose or remote surgery. Besides using remote monitoring tools for patients, cost reductions for healthcare is estimated to be significant. Remote patient monitoring in telesurgery, epidemic, and pandemic can have a good commercial opportunity given high reliability and affordability for the network services enhances communications within hospitals and other care providers. 6G high bandwidth also enables doctors to transmit and analyses large medical data. 6G technology would likely deliver a transformation on healthcare.

Although 6G extends the addressable market for the monetary opportunities, the backdrop of geopolitical implications needs to be prepared for. The political stakes are increasingly high given that virtually every aspect of society is connected digitally in the coming years, and governments' strategies to support their domestic industries likely lead to techno-nationalism. For example, North American governments have expressed concerns about the dependence of the semiconductor and manufacturing value chain on limited sources of supply. Operators and vendors are likely exposed to intensity of political powers in the near future.