In mid-November, Ericsson released its Microwave Outlook 2021 assessment. One of its key findings is that millimeter-wave deployments in the E-band (71 to 86 GHz) are continuing to build momentum.

In mid-November, Ericsson released its Microwave Outlook 2021 assessment. One of its key findings is that millimeter-wave deployments in the E-band (71 to 86 GHz) are continuing to build momentum. Ericsson states, “E-band, an essential part of 5G wireless backhaul support, is now spreading from the large uptake in Eastern Europe and Central Asia, to Western Europe, the Middle East, Latin America and Africa.” This concurs with ABI Research’s own cellular backhaul research study, Fixed Wireless in the 5G Era (AN-5477). For mobile operators, fiber optic may be the optimum solution for cellular backhaul, but the logistics and capital expenditure of distribution are constraining deployment. In particular, Ericsson comments that fiber-optic deployment for cellular backhaul in North America has largely stalled; it is E-band links that are taking up the slack. While fiber will play an important role, microwave/millimeter-wave backhaul will account for the majority of global backhaul links from 2021 to 2027, with about a 65% market share, according to ABI Research. 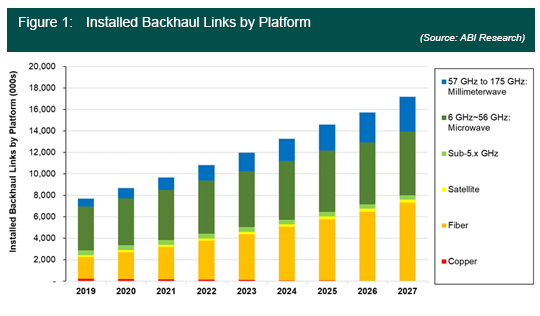 There are, in fact, a number of microwave fixed-link spectrum bands available to mobile operators, such as the 14 GHz to 25 GHz bands; however, the channel sizes for these lower microwave links have been substantially narrower—56 MHz versus 0.5 to about 2 GHz typically for the E-band. E-band can handle between 15 and 20 times more traffic than the typical mid-microwave band backhaul links.

It is not just the wider channel sizes that are drawing mobile operators to E-band. It may also be effectively combined with lower frequency microwave links to provide more robust, high data throughput connections over effective distances. This is known as Bands and Carriers Aggregation (BCA). The link in the lower bands (e.g., 18 or 23 GHz) is used to meet the carrier-grade availability (i.e., 99.995%), ensuring that high-priority traffic meets with the availability requirements of the network (especially in instances of links in higher-band fading). Combining lower bands with the higher E-band using dual-band antennas would allow links to cover 7 kilometers (km) to 10 km (versus just two to three km for E-band on its own) with capacities that can substantially exceed 10 Gbps.

Due to the availability of E-band licensing in more than 86 countries, ABI Research forecasts that the number of E-band links will grow at a compound annual growth rate of 11.6% over the next seven years. This uptick can be attributed to the increasing relevance of BCA solutions and the product maturity of the accompanying equipment that supports E-band link deployments. It is forecast that total number of E-band links (2.3 million) will account for 71% of overall millimeter-wave links (in V, E, W, and D bands) by 2027.

Fiber optic will be a key backhaul technology platform for mobile telcos, but microwave and millimeter-wave backhaul systems will prove to be vital solutions for a range of small-cell and macro-cell deployments in urban center and in rural communities. The “black horse” of cellular backhaul sector is satellite communication. At present, satellite backhaul represents 2% of total cellular backhaul links, and according to ABI’s baseline forecasts, the percentage ratio remains largely the same for 2027, although the overall total installed base of cell sites will grow to 17.1 million. However, satellite communication providers such as Hughes Network Systems, Intelsat, Viasat, and others have increased their data throughput per satellite into the terabyte-per-second range. While these Geosynchronous Equatorial Orbit (GEO) systems experience latency of around 650 milliseconds (ms), Low Earth Orbit (LEO) systems such as Starlink and OneWeb will have more viable 5G-tolerant latencies in the 30 ms to 50 ms range.

Satcom systems—especially Starlink—have a lot to prove, but it would be foolhardy to underestimate Starlink’s founder, Elon Musk. Satcom backhaul links have a real possibility of becoming a disruptor for cellular traffic in the mid- to long term. A lot of the disruption will depend on those satcom companies’ (LEOs and GEOs) hitting their constellation deployment targets and proving that they have long-term profitability. In the meantime, fiber optic will be deployed where it is logistically and economically viable to do so, but it is likely that microwave—and, in particular, millimeter wave—will take the lion’s share of the backhaul market. The cost of deploying E-band millimeter-wave backhaul links, along with its improved deployment versatility, is securing technological market share.