Magnite Bets Big on CTV, Acquires SpotX from RTL Group for US$1.17 Billion

On February 5, 2021, Magnite announced its acquisition of SpotX from the RTL Group for cash (US$560 million) and stock (14 million shares in Magnite stock) totaling US$1.17 billion (based on the closing price of Magnite stock on Thursday, February 4, 2021). Considering that SpotX’s 2020 revenue totaled US$116 million and the RTL Group spent EUR€107 million in 2014 (for 65% share) and EUR€123 million in 2017 for the remaining shares, Magnite paid a hefty price on the strong prospects for video advertising and CTV (Connected TV) in particular. Given the company’s recent history, however, the acquisition makes good sense.

On February 5, 2021, Magnite announced its acquisition of SpotX from the RTL Group for cash (US$560 million) and stock (14 million shares in Magnite stock) totaling US$1.17 billion (based on the closing price of Magnite stock on Thursday, February 4, 2021). Considering that SpotX’s 2020 revenue totaled US$116 million and the RTL Group spent EUR€107 million in 2014 (for 65% share) and EUR€123 million in 2017 for the remaining shares, Magnite paid a hefty price on the strong prospects for video advertising and CTV (Connected TV)  in particular. Given the company’s recent history, however, the acquisition makes good sense.

Magnite was formed in 2020 through the combination of the Rubicon Project and Telaria. Telaria was previously Tremor Video until it sold its DSP business to Taptica (which is now known as Tremor International) in 2017, and renamed itself Telaria. Rubicon Project’s business was primarily split between desktop and mobile platforms, while Telaria had a growing CTV business, going from 8% of Telaria’s business in 2017, to 44% of annual revenue in 2019 (it was 60% in 1Q 2020). During this time, Telaria’s revenue also steadily increased from US$43 million in 2017, to US$68 million in 2019. Rubicon Project’s revenue, on the other hand, fluctuated, moving from US$155 million in 2017, to US$156 million in 2019, with a dip to US$125 million in 2018. During this time, Rubicon’s revenue was shifting from desktop, which accounted for 54% of revenue in 2017, to 56% mobile by 2019. CTV and video advertising was already a key driver for Magnite, and the acquisition of SpotX complements this strategic initiative—58% of SpotX’s 2020 revenue was tied to CTV. While not confirmed, DAI specialist Yospace is likely part of the transaction as well because it was folded under SpotX during its time as part of the RTL Group, which if true would further shore up Magnite’s position as an independent CTV/online video SSP. 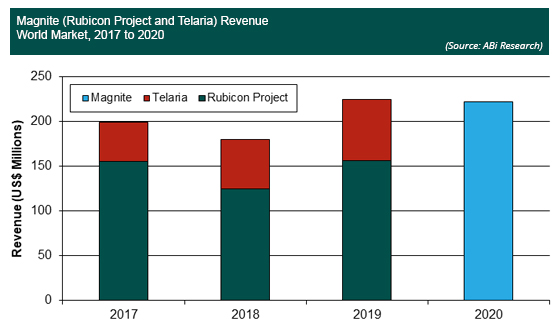 CTV advertising has been a key driver for the digital advertising market, particularly during the pandemic where it remained a segment of growth amidst a challenging environment. As has been true for other trends, the growth of CTV viewing and advertising was accelerated during the pandemic and is anticipated to remain strong moving forward. The growth in CTV revenue seen by Magnite (and SpotX) is mirrored by other ad tech companies as well; e.g., The Trade Desk, Amobee, Centro, etc. all reported increased CTV revenue, and while the shift in viewer behavior alone merits a strategic focus around CTV, it is also better insulated from some of the key ongoing privacy issues within the digital advertising markets.

Since CTV primarily deals with audience-level data, it typically avoids Personally Identifiable Information (PII), which continues to face increasing scrutiny via privacy regulations, consumer groups, and the public at large. In addition, CTV advertising is also less reliant on third-party tracking devices like cookies. Google is planning to deprecate third-party cookies in Chrome by 2022 (effectively ending third-party cookies), and Apple’s changes to its IDFA similarly makes tracking Apple iOS users more difficult. Companies do use AI/ML to create user profiles to bring CTV data and advertising closer to an individual level, but this is all probabilistic data versus the tracking devices’ deterministic information.

Magnite’s CTV strategy is well aligned with ABI Research’s current online video streaming forecasts, especially given the growing number of services offering live or linear programming and the continued growth in ad-based and hybrid services. The move to DTC and consumers’ amenability to stacking subscriptions is serving as a proxy or replacement for more traditional pay TV services. There was a time when pay TV operators were expected to transition to an a la carte channel model, but this is now the domain of streaming media. For the advertisers and ad tech companies, CTV should remain a priority as households have demonstrated a continued penchant for lean-back viewing on the TV, and this segment is relatively removed from near-term issues surrounding tracking devices. This market will also become increasingly important as content providers continue to bring linear programming closer to digital and push for a common advertising currency.

There is a number of new universal identity standards and platforms currently vying for market attention and traction. It will be compulsory for both demand- and supply-side players to follow these market developments carefully and work with those platforms that are taking an agnostic approach to these new identifiers in order to ensure there are no significant disruptions to operations if one or several identifiers takes precedence over the field. Nearly all the ad tech companies interviewed in the last market update held a firm belief that the market will find a viable alternative to these lost tracking devices, but there will be a period of transition. Even with increased privacy measures in place, the industry will still need to track the user at an individual level. While there could be some layers of obfuscation to avoid more specific PII details, the desire to track a user for targeted advertising and increasingly out-of-home/location-based marketing will ensure marketing at the individual level will continue. Part of this process will require advertisers and companies on the supply side to ensure that they communicate and provide enough value to the consumers/users to opt-in to individualized advertising. Simply offering more targeted ads is not sufficient; rather, additional value like special promotions/discounts or access to value-added features (e.g., additional information and/or services) will make for a better pitch to prospective users.