Intel Has Begun Riding on the Geospatial Trend 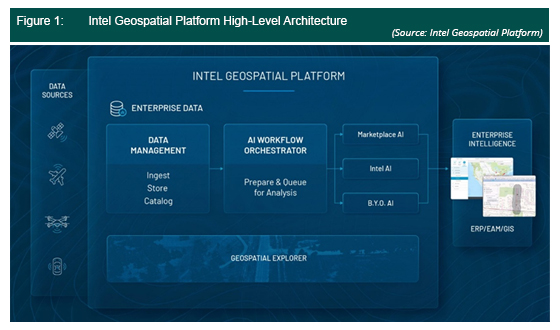 The platform uses Enview’s AI to enable 3D geospatial classification for faster turnaround of Light Detection and Ranging (LiDAR) analytics, and incorporates Cesium World Terrain, which is a Digital Elevation Model (DEM) that has approximate resolution of between 50 Centimeters (cm) and 30 Meters (m) for select countries, and includes 3D tiling powered by Cesium.

GIS-centric data management platforms, such as Intel’s Geospatial platform is not a new concept. Similar platforms have been introduced to the market, such as HERE’s Open Location Platform (OLP) and Kinetica’s data streaming platform for location intelligence. Although each company comes from a varied background, such as Intel being primarily a chipset manufacturer and Kinetica focusing on databases, the importance of geospatial data management has grown too much for companies to ignore.

The digital map market has been gaining significant traction over the years. In terms of digital map revenue, the digital map market in Asia-Pacific has grown 15.4% from US$2.6 billion in 2018 to US$2.9 billion in 2019. This is driven by key technologies, such as AI, the Internet of things (IoT), and better connectivity. The use of AI in the digital map market allows for more efficient map production. For example, TomTom uses AI to automate production of the road data they receive from 600 million vehicles, allowing for much quicker turnarounds for updates. AI can also be used for digital map applications for the insurance sector. For example, Digital Globe uses AI to identify objects or features like swimming pools in satellite data, allowing insurance companies to better evaluate property prices.

The IoT phenomenon, with more devices increasingly being connected and producing much more frequent data, also drives the digital map market. For instance, data sources are becoming more mobile and coming in smaller form factors. The average smartphone, for example, can provide consumer and location data to marketing companies and operators, as well as essential data for disaster management and threat mitigation. Qlue provides a smart city app for Indonesian citizens to report incidents, such as flooding, crime, fire, etc., and has a city dashboard that enables city officials and service provider to track and resolve these issues.

Finally, better connectivity, through upgrades in The 3rd Generation Partnership Project (3GPP) standards and new mobile cellular protocols, such as 4G and, much more recently, 5G, as well as constantly improving Wi-Fi standards, has allowed digital mapping to become an integral part of operations. The Singapore government has developed a public geoportal called Virtual Singapore (VSg), which is a 3D replica (digital twin) of the city. The ability to ingest and share such data is enabled by improved connectivity standards, which allows for higher bandwidths and throughputs, and low latencies that can support real-time data changes and updates.

Geospatial technology brings much value to any future-ready ecosystem. However, unlocking the full value of geospatial technology comes with many challenges. First, many countries are underequipped with the latest geospatial tools. For example, some Southeast Asian countries are still operating off static maps produced decades ago due to the lack of budget for technological upgrades, and a lack of know-how in terms of skill and knowledge. Second, accurate mapping data is expensive and hard to produce. Usually, satellite data are available for purchase, but higher resolution data would be much more expensive, and may require drones or manned aircrafts. Finally, there is a need for multiple data sources to unlock the value of location data. While a digital map provides the context for location data, the analysis and type of data are what truly brings out the value for geospatial.

ABI Research recommends that digital map companies look toward collaboration and their positioning to fully bring the value of geospatial to the market. Collaboration should not only occur between private companies, but also with the public sector and educational institutes. The public sector plays a key role in determining the mapping regulations and standards, which can either make data much more interoperable, or restricted. For example, GIS data in Thailand must be kept onshore due to government regulations designed to protect national military information. This will prove to be a challenge for companies that are storing data in offshore data centers, such as in the case of AWS and Azure. It is key that the digital map company works out an agreement with the public sector first before hoping to be successful in the country.

In terms of positioning, the mapping company needs to identify which part or parts of the value chain it serves. Generally, the geospatial ecosystem can be broken down into multiple stakeholders: 1) regulators, 2) data suppliers, 3) GIS software providers, 4) application providers, 5) service providers, and 6) platform providers. Intel is a platform provider and, admittedly, this part of the value chain is a relatively new addition, compared to GIS software providers, such as Esri, which has been around for decades and become entrenched in contemporary GIS education and usage. However, platform providers are key in enabling AI and IoT through data management, ingestion, and AI analytics. By identifying the parts of the value chain that the company serves, then the company can begin to craft its value proposition and find the right synergies with the right stakeholders.