The Reality of Broadband in Africa: Essential Facts for Mobile Network Providers

Enhanced connectivity and broader coverage help drive economic growth and improve the quality of life for users. Unfortunately, in Africa, being connected to a mobile network is not a reality for everyone, although enormous strides have been made in recent years. To this day, 1 in 5 people living in Sub-Saharan Africa still do not have mobile broadband coverage—more than 200 million people. Penetrating the African content is something many Mobile Network Operators (MNOs) like Vodacom are working hard on, considering the enormous population that resides there. But there are some unique characteristics of Africa that must be considered before reaching out to its customer base.

According to The Global System for Mobile Communications (GSMA), just 46% of people in the Sub-Saharan African countries had been subscribed to mobile services by the end of 2020. However, only 26% of the same population had access to broadband connectivity. 3G and 4G are easily the most popular forms of cellular broadband connectivity in Africa, with 600 million and 300 million connections expected, respectively, by 2024. In terms of mobile network coverage dispersion, urban areas have the overwhelming majority of connections, while rural areas rarely have broadband access.

It should also be mentioned that sub-6 Gigahertz (GHz) bands are the preferred spectrum for mobile networks in Africa. At the same time, Millimeter Wave (mmWave) is not going to play a major role in terrestrial mobile communications in the region because 5G handsets are just too expensive for the broader African citizenry.

Does Africa Have 5G?

Yes, Africa does have 5G availability, with several companies offering 5G-supported smartphones. However, 5G is still relatively rare in Africa at the moment, as only a small number of the 54 countries on the continent have begun commercializing it. ABI Research expects that 95% of mobile subscribers will still be using 4G, 3G, and 2G by 2026.

5G will only account for, at the most, 3% of the total mobile network connections in Africa by 2025. Legacy cellular networks are going to be the major focus of MNOs for the foreseeable future. But that’s not to say 5G investment is unheard of in Africa. Spectrum auctions have been carried out in South Africa and Nigeria—the latter of which is expected to have the most widespread 5G coverage in the region by 2023. Moreover, Safaricom has trialed 5G in Kenya.

When assessing the revenue potential in African countries for Mobile Network Operators (MNOs), it’s clear that there are limitations. For example, South Africa generates the highest Average Revenue Per User (ARPU) on the continent, but it’s still a long way from the ARPU that European MNOs see. Whereas the ARPU in South Africa is just over US$6, that number is more than double in places like Germany and Italy. Even in Greece, a country with a Gross Domestic Product (GDP) similar to Iraq, the ARPU from mobile network subscribers is about US$5 more than in South Africa.

As low as the ARPU is in South Africa, the numbers are even lower in Nigeria and Kenya. As a couple of examples, Africa’s largest mobile telecommunications company, MTN Group, generated just under US$4 per user in Nigeria in 2021 and Safaricom generated sub-US$2 in Kenya.  Due to the smaller monetary gain from mobile subscribers, there’s a greater need for African MNOs to carefully invest in projects that align with market conditions. Generally speaking, there is less margin for error in the region. 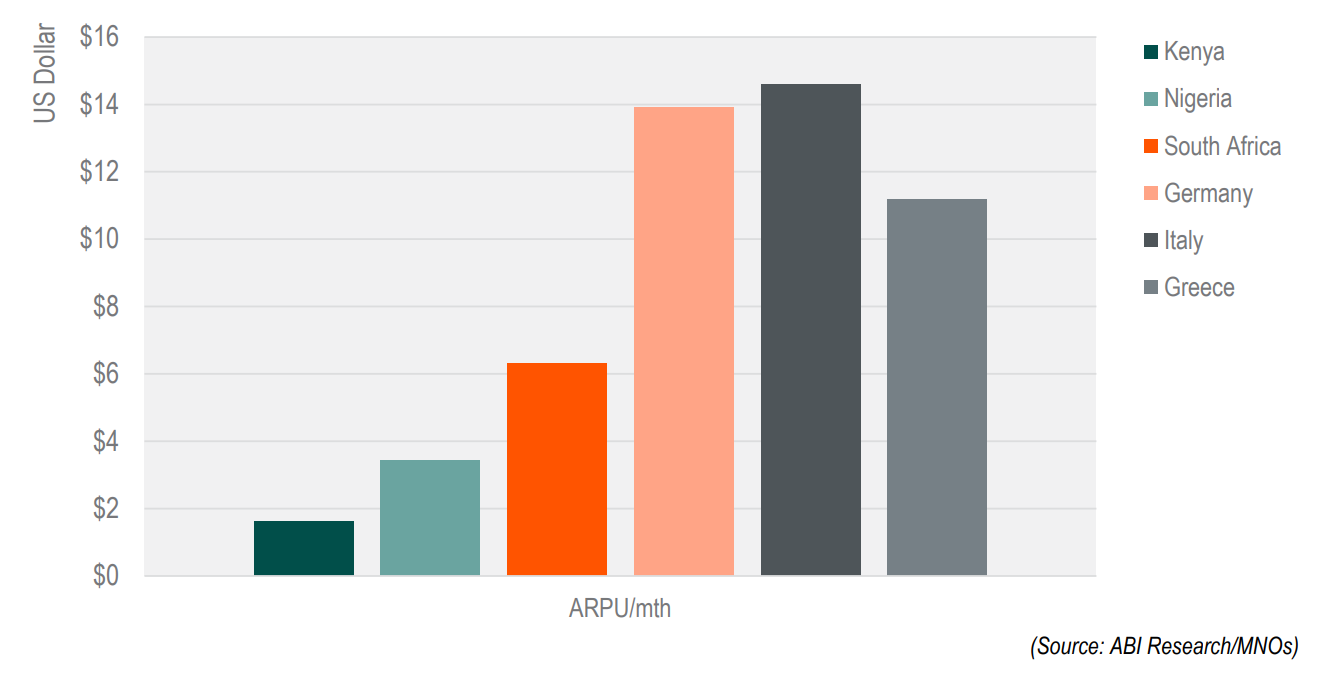 Delivering mobile broadband internet to inhabitants of Africa is a strenuous endeavor. On one hand, Africa has the world’s second-largest population. But on the other hand, that population is far more spread out than many other regions. This combination makes it challenging for telcos to provide reliable broadband services to every community. For these reasons, non-terrestrial mobile networks can be a game changer, as satellites can provide coverage to a broader geographical range. African MNOs will increasingly turn to partners like Israeli company Gilat Satellite Networks for expanding 4G coverage to developing nations.

Satellite Internet has been a topic of great interest to The 3rd Generation Partnership Project (3GPP), as it bridges the “digital divide” and will support many 5G use cases. Some of those use cases include  5G New Radio (NR), 5G Core, 5G Mobile-Access Edge Computing (MEC), and extending network coverage of 5G NR. Beyond the consumer segment, Satellite Communications (satcom) will be beneficial to the following industries in Africa:

To learn about some of the technologies and applications that make Satcom possible, download the free whitepaper today: Broadband Communications In Africa: Spectrum, Solutions & Objectives

The continent of Africa has traditionally been a laggard when it comes to adopting emerging technology, and mobile broadband services are no different. Much of this is inherently tied to the limited budgets of governments and the limited disposable income of the inhabitants. However, it isn’t all doom and gloom; more and more people in underdeveloped regions like Sub-Saharan Africa are “connecting,” largely due, in part, to satellite broadband. While mobile network providers are focusing on 5G in most regions, 4G/Long Term Evolution (LTE), 3G, and even 2G will remain the most closely aligned with market demands in Africa for years to come.

Although Africa won’t be a go-to market for 5G, there is great incentive to focus on expanding cellular broadband coverage in the region. As reported by the ITU in its Economic Contribution of Broadband, Digitization and ICT Regulation: Econometric Modelling for Africa report, a 10% increase in mobile broadband penetration in Africa will translate to a 2.5% boost to the continent’s collective GDP. When millions more people build digital profiles, it’s a win for everyone. Communities will become more modernized, while new revenue streams will form for mobile providers or any company selling products/services online. Latest Trends and Developments in the Telecommunications Sector