Breaking Down the Global Gaming Market in 2022

With the buildup of the metaverse, every company in the video games space should be aware of current and future demand in several domains. Due to the COVID-19 lockdowns, the gaming market was taken up to a new notch as demand exploded. For many people who had stopped playing video games or never played them before, the lockdowns gave rise to a hobby that they otherwise would have ignored, even after lockdown restrictions have been lifted. For people who were already avid gamers, their appetite for new content only grew.

With 3.2 billion video game players worldwide, the industry presents one of the biggest opportunities in the consumer markets. As noted in the recent ABI Research market data report, the gaming industry is valued at US$221 billion in 2022. That number is expected to grow steadily to a worth of US$261 billion by 2027.

Mobile gaming generates the greatest amount of revenue (US$118 billion) out of the four main categories in the gaming market (which also includes console, PC, and handheld), according to ABI Research’s Consumer Metaverse: Digital Content, Services, and Advertising market data report. PC gaming and console gaming are a far cry from the mobile gaming market, with US$52 billion and US$50 billion in revenue, respectively, in 2022. Meanwhile, handheld gaming is nearly a dead industry, generating US$140 million in revenue this year, and will be phased out by 2024.

The popularity of mobile gaming can be largely accredited to the convenience factor that comes with it. It’s incredibly easy to just take out your phone and hop into an entertaining game, whether you’re at home, sitting on the train, waiting in a doctor’s office, etc. Considering that the average human attention span shrunk by 25% between 2000 and 2015—from 12 seconds to 9 seconds—mobile gaming has found a match with the perfect generation. But the need for instant gratification is just one piece of the puzzle; other factors that have led to the popularity of mobile gaming include advancements in touch-based controls, richer graphical fidelity, and an enormous library of games with diverse genres.

Physical Media Has Fallen to the Wayside in Gaming

As a sign that physical media is dying in the gaming industry, 100% of revenue in PC gaming is digital. Not to mention, mobile gaming is entirely digital as well. Digital media consumption on consoles is a dying breed as well, but not completely. Physical media sales have been quite consistent between 2013 to 2021 (US$11 billion annual average), but the decline has begun. Physical media revenue for the console segment is expected to drop to US$7 billion in 2022, US$4 billion in 2023, and eventually hit sub-US$1 billion by 2027.

To make this trend even more apparent, consider the US$214 billion generated in digital media compared to just US$7 billion that stems from physical media. That means 97% of all software and services sold in the gaming market are digital.

The prevalence of physical gaming software and services has been decreasing year-over-year for a while now, and it’s going to virtually disappear by 2028. US$380 million in physical gaming sales will be had in 2028 and US$267 billion from digital media.

With US$27 billion in 2021 revenue, Chinese game developer Tencent captures 13.2% of the global gaming market share—which is, by far, the most out of all vendors. Coming in second is Sony Corporation, achieving US$13.6 billion in revenue and encapsulating 6.6% of the market share.

Microsoft and NetEase are nearly identical in terms of market penetration, with US$9.8 billion and US$9.7 billion in annual revenue, respectively. While Microsoft Corporation captures 4.8% of the market share, NetEase captures 4.7%.

Some other notable key players and their current market shares are: 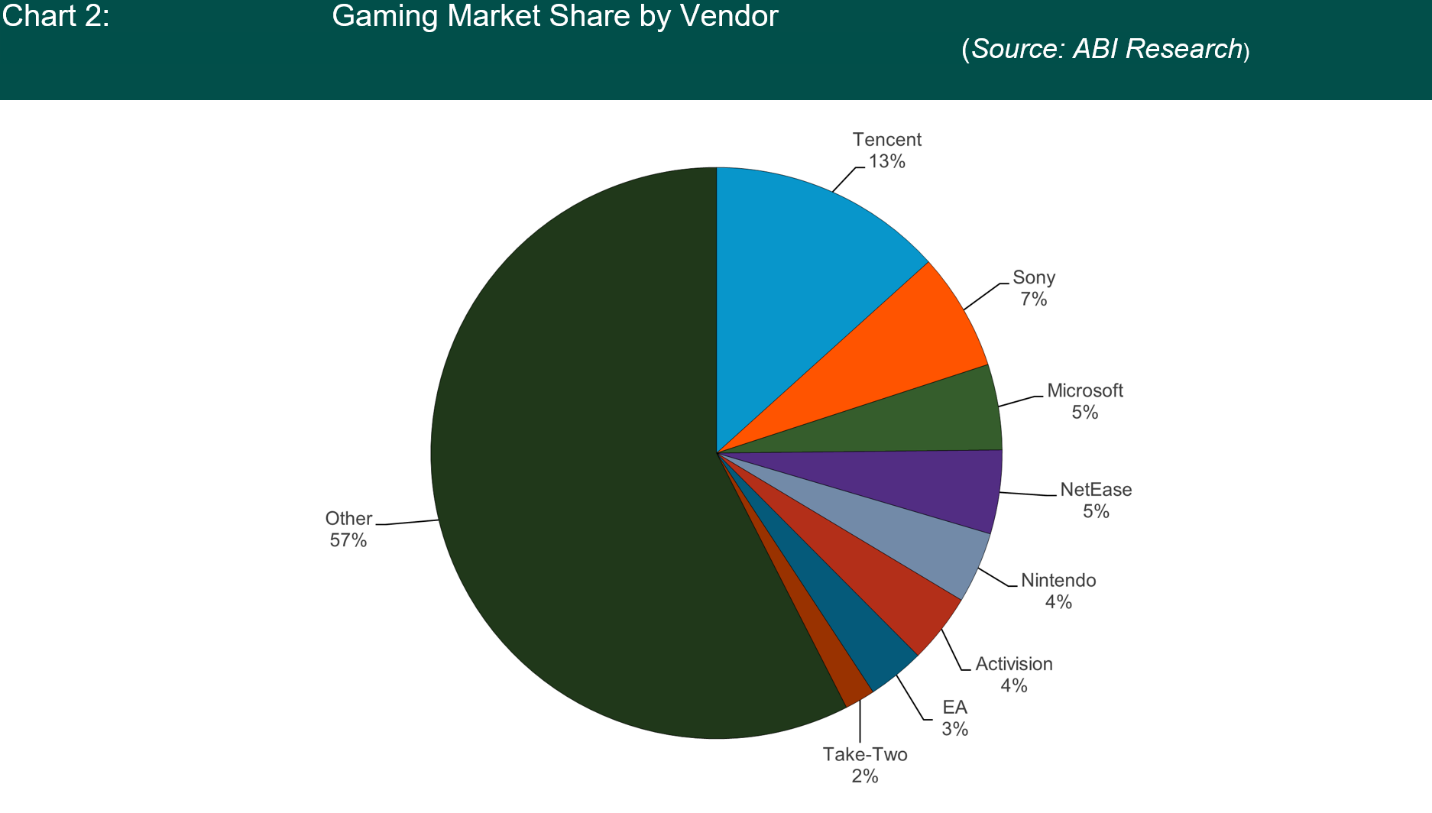 Asia-Pacific (APAC): With US$92 billion in total revenue, APAC comes out as the top regional opportunity in the world; with a US$100 billion opportunity by 2027. APAC is also home to more than half of all gamers worldwide, with 1.8 billion people playing video games in the region.

North America: Revenue will reach US$65 billion in 2022, making it the second largest gaming market in the world. The region is also growing at a Compound Annual Growth Rate (CAGR) of 3.9% between 2022 and 2027. 266 million gamers are living on the continent, which is behind APAC, Europe, and even Latin America. However, North America brings with it the highest percentage of the population that plays video games (71%).

Europe: The more affluent Western European nations account for 83% of all gaming revenue on the continent. Compared to the US$41 billion in revenue generated in Western Europe, Eastern European nations will see about US$9 billion. Between Western and Eastern Europe, 393 million people play games on the continent. Although this brings the total number of gamers in Europe much higher than in North America, the latter country generates significantly more revenue—indicating that Europeans are more price-conscious than North Americans when it comes to gaming purchases.

Latin America: Latin America has historically been an afterthought for game developers, but the region is making a case for being paid attention to more intensely. While Latin American gamers only spent US$2 billion on software and services way back in 2014, that number has climbed to almost US$12 billion today. Growing at a CAGR of 8% between 2022 and 2027, the region will generate US$17 billion in revenue by the end of the forecast period. Like Europe, this means that more gamers reside in Latin America than in North America, although the region only generates a fifth of the revenue that North America does.

Middle East & Africa: The Middle East & Africa region, like many technologies, lags behind the rest of the world when it comes to revenue. While the US$3 billion in 2022 revenue is a gigantic leap from the US$610 million in 2014, the regional gaming market is still just about a third of Latin America’s. By 2027, revenue will see a slight boost to US$4 billion.

For developers that have the financial capital, cloud and location-based gaming are unquestionably worth investing in. Or even for smaller firms that are looking to differentiate themselves, these two interactive mediums are going to see plenty of demand. That’s why key players like Amazon, Electronic Arts, and Microsoft Corporation are building and expanding their cloud gaming portfolios.

“Cloud gaming is still comparatively nascent, but it still holds potential as a growth segment, particularly if it does bring in new gamers, as many within the industry hope.”

While cloud gaming generated US$1 billion in revenue in 2018, it has more than doubled to a US$2.4 opportunity in the overall market. It’s also growing at a CAGR of 30% between 2022 and 2027, bringing it to a total of US$8 billion in revenue worldwide.

Pokémon Go garnered considerable attention from consumers on the interactivity of location-based gaming. Some new titles have been released in recent years as mobile game developers aim to gain market share in this growing segment. While location-based gaming generates US$2 billion in revenue in 2022, by 2027, that number will approach the US$8 billion market. And by 2030, US$14 billion in revenue is up for grabs—exemplifying the importance of ramping up efforts in this space sooner, rather than later.

The global gaming market forecasts that ABI Research has compiled are illustrative of healthy consumer demand for content and entertainment. While the degree to which the metaverse becomes part of the average consumer’s life remains to be seen, it’s clear that video games will be a substantial part of metaverse entertainment. Across every global region, the gaming market growth is promising and the industry is even inviting to new entrant companies, such as cloud providers that haven’t yet invested in gaming. Use Cases of the Enterprise Metaverse and Immersive Collaboration (with Examples)