An Exciting Future For Exoskeletons

When it comes to the robotics market, automation-enabling devices like cobots and 5G robots tend to garner a lion’s share of the attention. However, there is one technology that has flown under the radar yet is poised to make just as big of an impact – exoskeletons. By 2030, global revenues will reach more than US$7 billion in this emerging market, with industrial use cases being a major catalyst.

What Is an Exoskeleton?

Exoskeletons are a type of augmented technology designed to bolster human performance in physically demanding tasks by supporting body parts like the hands, lower back, legs, and upper body. This reduces the energy needs of workers when lifting, transporting, and holding tools, boxes, and other industrial assets safely. With this deployment, the frequency of musculoskeletal disorders is significantly reduced.

Now consider the astounding monetary loss that work-related musculoskeletal disorders (WMSD) can cost a company. According to Injury Facts, injuries cost companies US$163.9 billion per year collectively. It can be broken down into the following:

Figure 1: Warehouse worker using a wearable exoskeleton device for lifting a pallet, relieving the hands, arms, legs, and back from strain. 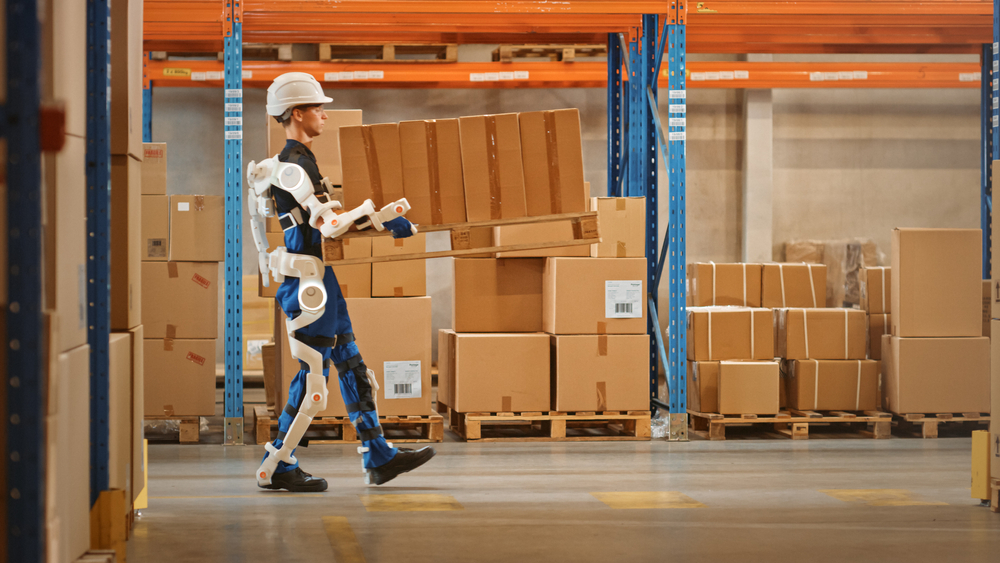 Types of Exoskeletons and How They Work

There are two distinct types of exoskeletons  – passive and powered.  The passive variation do not have any power source, and they serve mainly to increase strength and provide stability to end-users. On the other hand, powered exoskeleton technology utilizes some form of energy to power sensors, actuators, and other tools. Most currently in use are passive, mostly because they are more affordable and they address specific challenges or use cases.

The future of exoskeleton design is to integrate them with the Internet of Things (IoT) to capture data and provide insights to leadership teams. Eventually, this technology will need to integrate with robotic arms, collaborative robots, and mobile robots through advanced location technologies, haptics, and gesture control.

While most warehouse robots focus on automation, exoskeletons can help human workers by enhancing safety and productivity, especially in the industrial space. However, that sometimes goes hand-in-hand.

To that end, organizations such as NASA, Boeing, and GM have already started deploying passive exoskeletons and making them a standard part of their warehouse operations. Toyota is another company betting big on the technology, as they have deployed hundreds of suits designed by Levitate Technologies in manufacturing plants around the United States.

Labor shortages were bad enough before the COVID-19 pandemic. The manufacturing workforce is considered quite old, meaning young people are not inclined to take warehousing jobs. To keep operations sustainable into the future, industrial and manufacturing companies need to try and increase the productivity of each worker. They also have to protect workers who are at high risk of musculoskeletal disorders. Fortunately, a human exoskeleton can help solve both these problems.

As warehouses and industrial work environments become more digitized, managers want to get their hands on more data points that can be used for strategic decision-making. Exoskeletons serve as the bridge between robotics and smart wearables placed on the human body, providing a holistic view of the performance of workspaces.

Here are the advantages of exoskeleton technology in warehouse/industrial operations:

The greatest advantage of these suits and components is the promised increase in human performance (workplace productivity). With less bodily fatigue and reduced energy needs, each individual worker can complete more tasks during a shift. Besides that, many tasks can simply be automated, which saves time and energy.

How Much Do Exoskeletons Cost?

Fortunately for enterprises looking to invest in these robotics technologies, the ASPs will fall. While a full body powered suit for heavy lifting costs US$65,567 today, the ASP will decrease by 7% through 2030—to reach a US$39,035 price point. Or take upper body exoskeletons of the light lift variety as an example. The current US$14,172 price will fall to US$11,722 by 2030.

To get a broader overview of the costs of exoskeletons, reference the table below.

The deployment of exoskeletons must come with a fully technologically integrated approach. For example, tracking KPIs of a worker’s performance will require a visualization software platform. With an eye toward the future, two major suppliers are making inroads in the present. German Bionic Systems (GBS) and Sarcos are staking out a foothold in the industrial market. GBS has developed an IoT platform and will continue ramping up production now that it has a new factory.

Sarcos is beginning to test its products for military infrastructure through a slew of contracts with the U.S. government. The Japanese market is thriving through companies like Cyberdyne and Panasonic Atoun, while the opportunity presented by China is still in its infancy.

There are also other companies like Fourier Intelligence that have developed EXOPS, an open-source platform that helps reduce the time-to-market for manufacturers building from scratch. The EXOPS platform can also connect the exoskeletons with wearable devices like headsets and smart glasses.

Investments in industrial exoskeletons are going to be explosive for the foreseeable future. According to ABI Research’s most recent market update, industrial shipments will hit 274 million units in 2030 and revenue will be US$3.4 billion by the end of the decade. This makes the industrial market segment the biggest adopter of wearable robotics, closely followed by the commercial segment, then to a lesser degree, the military segment.

Within the industrial segment, manufacturing accounts for more than half of all exoskeleton shipments and revenue, followed by Energy/Utilities and Oil/Gas. At the same time, commercial deployments are not too far behind the industrial sector, with 198 million units expected to ship in 2030 and US$2.9 billion in revenue.

Although passive exoskeleton shipments significantly outpace powered ones, it’s the latter that generates a greater amount of revenue across all verticals. For example, in 2023, there will be 46,000 passive shipments and just 14,000 powered shipments. Yet revenue for the latter will be US$127 million more than the former. By 2030, powered revenue will surpass US$5 billion, which is nearly twice as much as passive. This goes to show just how much more of a financial commitment it is to purchase fully active (powered) suits.

Worldwide, exoskeleton revenue is growing at a CAGR of 41.6% between 2021 and 2030. The United States, Germany, China, South Korea, and Japan are the regions adopting exoskeletons the most, accounting for 77% of global revenue (US$629 million) in 2022. By 2030, that number will go down to 68% of global revenue (US$7.4 billion) as later adopters in some other countries cut into the market share. But that’s not to say these regional leaders aren’t going to continue growing their deployments.

Between the added weight and the technical difficulty of implementing zero-gravity arms, exoskeletons can be difficult to deploy en masse, and it can even cause anxiety for workers. Companies may also find the investment in robotics and software technology a difficult pill to swallow as advancements in mechatronics is slower-paced than software innovation, hindering the maximum potential of exoskeleton deployment.

Another key challenge facing the market is the complication of calculating an ROI. How do you measure ROI? Is it fewer work-related injuries? Increased productivity? If it’s the latter, it can take years before seeing tangible results, making key stakeholders skeptical.

Infrastructure shortcomings will be the main issue for the Small-to-Medium Enterprises (SMEs) who are potentially the target mass market for exoskeleton products. To make sure that SMEs are capable of receiving and storing exoskeleton suits and components, vendors will need to strike up partnerships with ecosystem integrators or turn to in-house solutions.

Now, let's take a look at several examples of exoskeletons to provide a better overview of how the technology works.

EVO, developed by Esko Bionics, supports the weight of a worker’s arms, which takes the load off of the worker’s shoulders and arms when lifting something overhead. Between 5-15lbs of lift assistance per arm can be achieved with the EVO vest. All the worker has to do is wrap the vest around the waist, allowing for a full range of motion when standing. 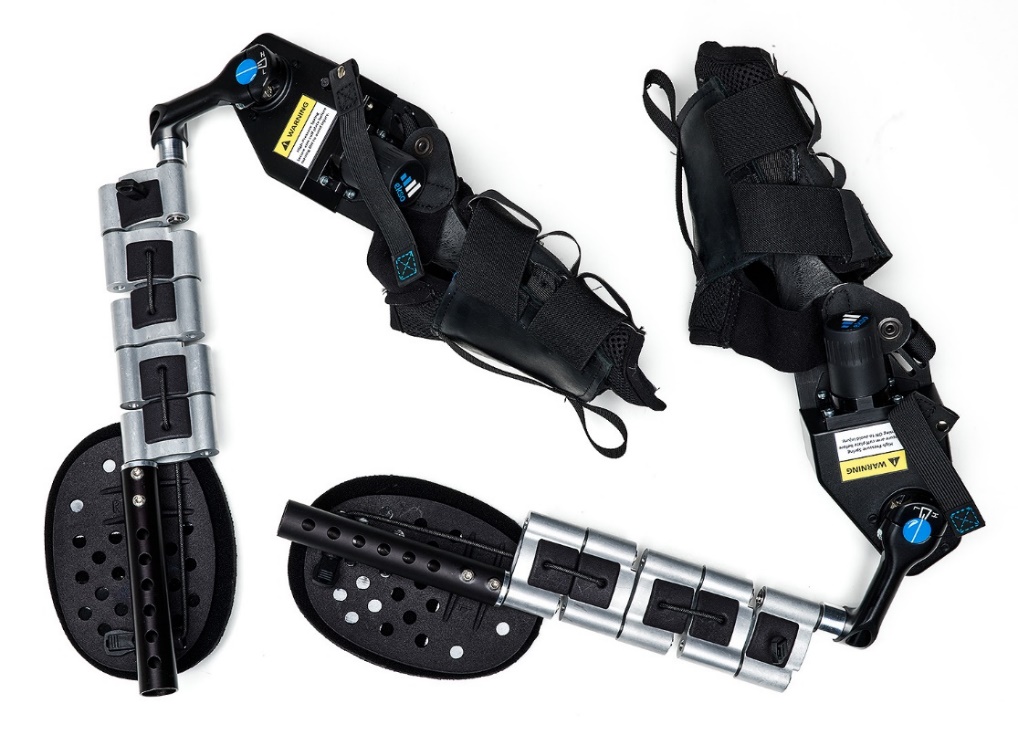 The Paexo thumb, made by another German company called Ottobock (who has acquired SuitX), reduces thumb strain by as much as 70% by diverting much of the forces to other parts of the hand. This exoskeleton example also highlights the need for protecting fingertips from mechanical impacts like clipping and plugging. 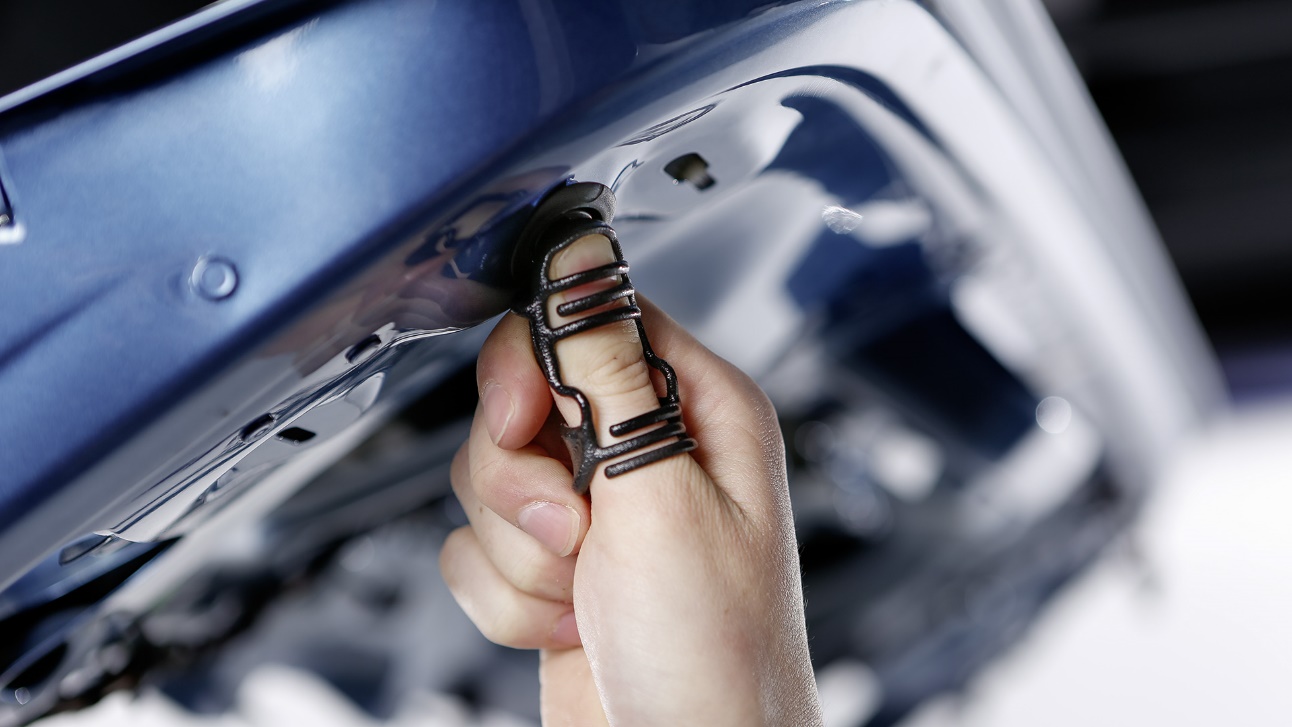 Dutch-based company Laevo offers two products to support the back: Laevo FLEX and Laevo V2.5. FLEX is the better of the two iterations as it delivers 2x higher peak support torque and 3x more energy return than the Laevo V2.5. Laevo FLEX is designed to let workers walk kilometers every day without having to play with the on/off buttons. Further, Laevo FLEX enables dynamic lifting, it’s comfortable and flexible for all body shapes and is resistant to dust and water. 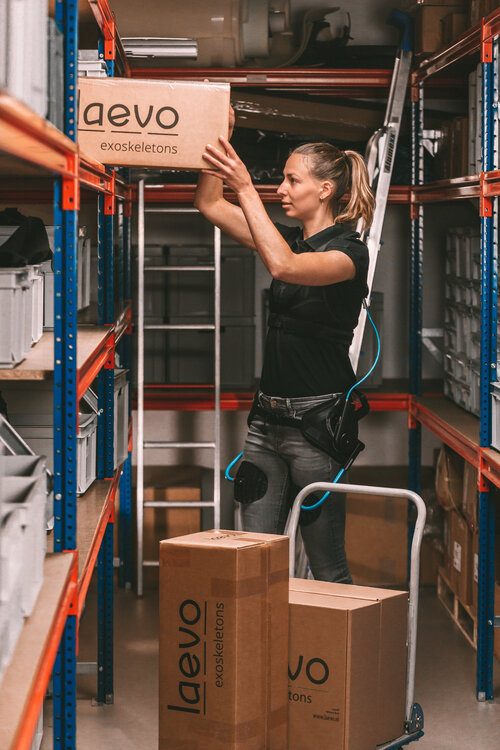 Hyundai’s wearable Vest Exoskeleton (VEX) is designed to be much lighter than similar suits and uses a multilink lift assistant module to mimic human shoulder joint movements. With the VEX suit, production line workers gain more load support, mobility, and adaptability when performing tasks that deal with overhead (i.e; bolting the underside of a vehicle, fitting brake tubes, and attaching exhausts). Equipping a worker with the VEX suit is easy as can be because it’s worn just like a backpack. 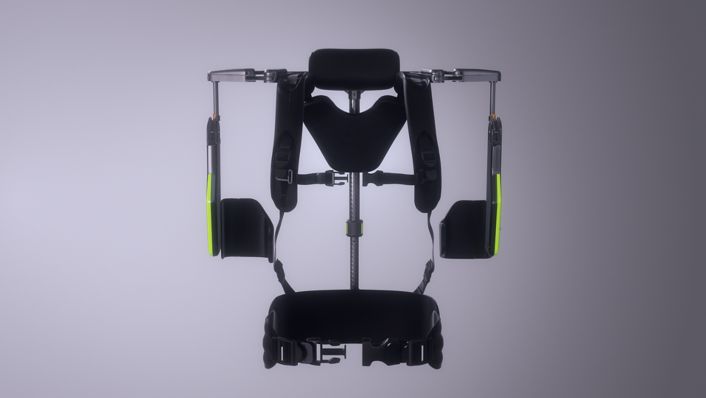 Many industries are facing a unique set of challenges, including labor shortages and an aging workforce. While exoskeletons have the potential to help combat these issues, technology providers must make sure that companies and other organizations can see the potential ROI of investing in the technology.

There must be a viable business model, increasing adoption of Robot as a Service (RaaS), and a demonstrable ability of both providers and end-users to draw insights from collected data. Establishing partnerships with the cloud providers and industrial platforms that will ultimately enable the value add-on needed to differentiate providers will also be key. Furthermore, organizations like the association for exoskeleton industries (VDEI) are important for developing standardization when it comes to best practices.

Many industries are facing a unique set of challenges, including labor shortages and an aging workforce. While exoskeletons have the potential to help combat these issues, technology providers must make sure that companies and other organizations can see the potential ROI of investing in the technology.

The focus now should be on creating a business model that supports Robot as a Service (RaaS), as it provides flexibility for end customers. Moreover, finding a way for vendors and end-users to use extracted data from their robotics is of paramount importance.  Another key action to take is to strike alliances with cloud providers for enabling industrial platforms. That's because, in the end, new revenue streams from add-on services are not possible without the proper software infrastructure in place. Finally,  standardization is crucial for developing best practices, with organizations like The Association for Exoskeleton Industries (VDEI) at the forefront.

Learn more about exoskeletons in industrial use cases by downloading the report. 8 of the Finest Machine Vision Companies and Recent Startup Developments Our Findings from IMTS 2022: Lessening the Pain of Manufacturing Labor Shortages