Back in Session: Mobile World Congress 2022

Mobile World Congress was back in full session for the first time in three years. Barcelona’s premier technology show hosted over 61,000 physical attendees, but with an experience that was markedly different than in years past. The exhibition floors, keynote auditoriums, and meeting rooms had all been reorganized. The revised format inevitably featured fewer exhibitors and wider stands, allowing participants to focus more on substance than style. Many attendees noticed the absence of “bells and whistles,” so demo kits and prototypes were left behind.

While Mobile World Congress traditionally spotlights the must-see items within the consumer market, this year’s was a more enterprise-oriented show. In turn, many of the discussions had and overheard revolved around functionality and infrastructure improvement strategies rather than product launches. Some new smartphone releases were an exception, but with a quieter buzz around even those announcements.

Several ABI Research analysts who cover our 5G, Internet of Things (IoT), and Wi-Fi related services were in attendance, and came away with insights into the current global market.

5G for enterprise applications was a chief concern among telco vendors. Despite 5G being commercially available and overall more prevalent, most vendors have a strong pragmatic view of its long-term future. Vice President of Strategic Technologies Malik Saadi suggests that “for 5G standalone, most vendors see the technology as a key step for enhancing the network efficiency, performance, and reliability in the short-term. However, they are less certain about the future of the technology as a foundation for enabling quality-of-service-based subscriptions or dynamic slicing. The industry has also come to realize that 5G private networks will not be able to address all enterprise pain-points and alternative technologies could be far more cost efficient in addressing certain use-cases and enterprise verticals.” Senior Analyst Leo Gergs observed that “more than 90% of the conversations I had centered around private networks.”

Research Analyst Reece Hayden noted the increased efforts telco vendors are making toward sustainability—particularly major players such as Huawei and Ericsson. Many telco companies are aiming for net-zero emissions goal of anywhere from 2040 to 2050.

Similar sentiments were echoed by David McQueen, Research Director covering 5G Devices, Smartphones, and Wearables. He expects the terms “metaverse,” “sustainability,” and “5G Advanced” to be “key drivers for technology evolution over the coming years in the mobile devices, and wider IoT, space.”

IoT presented strongly at MWC, but as Research Analyst Tancred Taylor reminds us, “IoT remains a Wild West, characterized by lots of companies with lots of ideas, but poor lonesome cowboys rather than a federated state pulling together.”

As renewed interest in eSIM took hold at MWC, prominent Ericsson and Cisco have both integrated eSIM subscription management into their Cloud Management Platforms (CMPs), as carriers now reportedly realize that they are missing out on potential business from IoT customers.

Qualcomm announced the first Wi-Fi 7 chipset, which signals the possibility that an upgrade from Wi-Fi 6 is imminent, despite the latter still being somewhat new as well. Industry Analyst Andrew Spivey confirms that although 2024 looks like a more accurate timeline for release, “we will likely see an array of Wi-Fi 7 ready consumer devices hit the market whilst the standard is still in draft phase, as was the case with prior generations of Wi-Fi.”

Be sure to get more observations and takeaways from this historic show in our whitepaper, Key Takeaways from Mobile World Congress 2022. 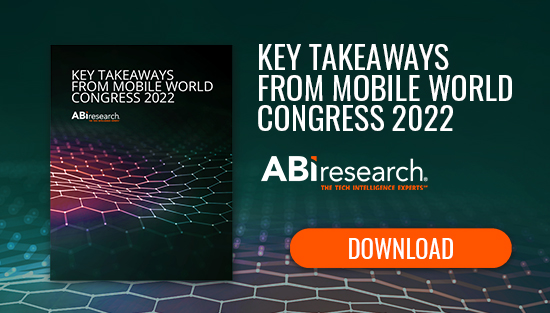