Alphabet’s Intrinsic: Can the Complexity of the Robotics Industry be Harmonized into Platforms?

The robotics industry needs to become more centralized in order to fully succeed.

Alphabet's secretive X research and development division has produced a new company. Intrinsic is a platform-centric robotics software vendor that looks to, in its own words, democratize the value of industrial robots for both established manufacturers and smaller enterprises that have, up until this point, been left behind by automation. The company has been incubated for the last decade and is trying to bring the power of Silicon Valley’s platform model to the mature and entrenched market of industrial robotics.

A confluence of new technologies is opening up the possibility for businesses to make this technology more accessible. This includes ever cheaper sensors and cameras, much greater availability of data, and the necessary algorithmic improvements to take advantage of this. Intrinsic hopes to capitalize on this and offer a common platform for all industrial robots. The platform can be roughly segmented into development services, production services, specific applications, and a dedicated hardware controller. They are also offering an SDK for application development, which includes pre-built application templates and a plug-in for cloud services. The company has outlined some key bottlenecks that prevent robot accessibility and looks to offer solutions to open  them up:

Multi-robot orchestration, in particular, has the potential to greatly accelerate robot adoption. If effective software modeling and programming automation can be applied to whole fleets of industrial arms, the company believes it can reduce thousands of hours of deployment and installation to one hour. To achieve this goal, Intrinsic is cooperating with another major part of Google’s future strategy, DeepMind. Other partners include Festo, Stellantis, and Italian Industrial robot developer Comau.

While the company has many pilot schemes planned, they are a long way to being fully commercialized. It is likely they will run on a Software-as-a-Service (SaaS) model. While they claim to be cloud-agnostic, it is hard not to imagine they will be a major part of Google’s broader foray into robotics, which includes robot-specific cloud applications related to Google Cloud.

Google previously approached robotics acquisitions of well-known hardware technology demonstrators, like Boston Dynamics. This ultimately was unfavorable to the platform approach and economies of scale associated with Google’s web browser and the Android OS ecosystem. By reaching for the ‘Android’ of industrial robots, Intrinsic is a clear case of Silicon Valley looking to expand its role within the burgeoning robotics industry.

Intrinsic builds on a lot of other vendors who are in this space of industrial robot enablement. This includes solution providers like Covariant AI, software-centric picking solution vendors like Righthand Robotics and Fizyr, operational software vendors like Formant and InOrbit, and control system providers like Ready Robotics and Wandelbots. More than any other company though, they are consolidating disparate services into what they hope will be a comprehensive platform.

Horizontal robot-related platforms are becoming ever more common and integral to the architecture of the industry. The value proposition is clear. Rather than building specialized robot hardware or Industry-specific solutions, many vendors want to achieve the level of centrality that companies like Microsoft, Google, or Amazon play in their respective industries. The various platform plays for industrial and commercial robots can be seen below. 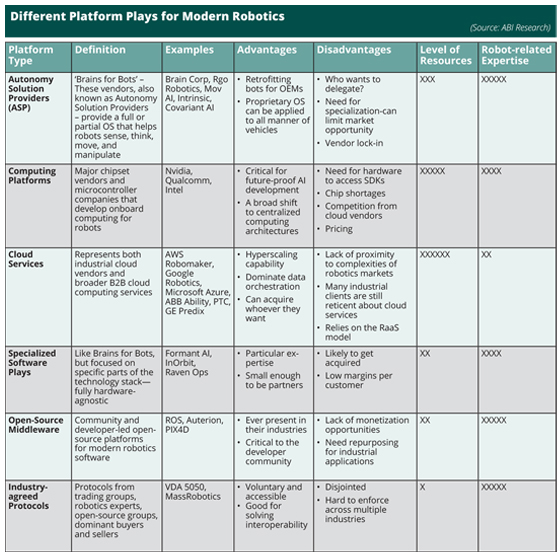 As is clear, there are a lot of players fighting to gain platform dominance in robotics. This is partly to get into a position by which companies can extract rents from the industry, and harmonize a fragmented market. With Alphabet showing its hand with Intrinsic, expect other significant players to accelerate their plans.

The platform model is enticing to many budding roboticists, but the last decade has highlighted its limitations in other industries. While platforms like Uber appear ever present and therefore successful, their economics still fail to live up to the scaling opportunities afforded to web browsers and social media companies. This is partly due to the continual costs of expansion that come with rolling out ride-hailing services in different areas. There is also the serious question of fragmented regulation across not just countries, but cities and local authorities.

The complexity and variation within modern robotics are far harder to harmonize into a set of platforms than social media or telephony. ABI Research’s past endeavors have found that hardware agnosticism is much easier said than done, unless the software is such a generalist as to be easily commoditized. Thus, while companies have tried leasing their OS to a wide range of robotic customers, they generally fall back on a few established robotics companies that build forklifts or manual vehicles and want to start their automation roadmap. What is more, with fierce competition in every market, they tend to focus on developing a small set of expertise across two to three markets rather than take a horizontal approach.

This challenge has not stopped some vendors suggesting to ABI Research that the robotics industry will eventually be dominated by two or three giant platforms, but we remain unconvinced. More likely, there will be a larger number of informal federation-type ecosystems centered around key platforms, which will, in turn, focus on specific use-cases. It may become consolidated to the point where it doesn’t matter if the robot is moving goods in production or fulfillment operations, but the fundamental use-case (material handling, data collection, mobile manipulation) and general environment (indoors/outdoors/public/workplace/rugged) will still require specialization.

Nevertheless, for the industry to meet its promise, it has to become more centralized than it is now. Platform-centric endeavors like Intrinsic are early in their journey, but their strategy will leave an indelible mark on wider automation before the decade is out.