Adoption of Cloud Native Is Increasing, but What Will the Journey Look Like?

The telco industry has recently been ramping up on public cloud deployments. Recent developments include DISH’s deployment of its core and Open RAN network on AWS (announced April 2021), Ericsson partnering with AWS to deploy its BSS portfolio on the public cloud (announced May 2021), AT&T announcing deployment of its 5G core on Azure in July, and Rakuten’s fully cloud-native and multivendor platform announcing its first customer early this year. These developments also mark a bold step forward towards adopting a cloud-native environment for Communication Service Providers (CSPs).

The telco industry has recently been ramping up on public cloud deployments. Recent developments include DISH’s deployment of its core and Open RAN network on AWS (announced April 2021), Ericsson partnering with AWS to deploy its BSS portfolio on the public cloud (announced May 2021), AT&T announcing deployment of its 5G core on Azure in July, and Rakuten’s fully cloud-native and multivendor platform announcing its first customer early this year. These developments also mark a bold step forward towards adopting a cloud-native environment for Communication Service Providers (CSPs).

Cloud native is a concept that is considered by the telco industry as the next step in the evolution of building their telco stack and is crucial in realizing the full benefits of 5G. Cloud native is less of a technology and more of a method of building applications. It includes DevOps that integrate software development and IT operations with automation, introduces Continuous Integration and Continuous Delivery (CI/CD) pipelines, leverages on microservice architecture, and utilizes containers to deploy network functions. All of these work together to bring benefits such as reduced Time to Market (TTM), increased portability, automatic scalability, continuous delivery for 5G cloud-native applications, and new business value creation.

ABI Research’s Telco Cloud Forecast and Tracker (MD-TCF-101) finds that global Cloud-Native Network Functions (CNFs) revenue will grow at a 5-year CAGR of 27% between 2020 and 2025, proving that cloud-native technology is gaining traction. As seen in Figure 1 below, CNFs will continue to exist alongside Virtual Network Functions (VNF), with the latter contributing to US$18.7 billion of global revenue by 2025. No doubt while more CNFs will be deployed as cloud-native technology matures in the telco industry, ABI Research believes that it will not yet meet critical mass within the next 5 years. Instead, the journey to cloud native for CSPs will be an evolution rather than a revolutionary leap forward in technology. We expect this to be the case due to the many challenges that the telco industry faces when trying to deploy, and the glacial changes that must take place in terms of technology and mindsets for CSPs, equipment vendors, and other stakeholders. 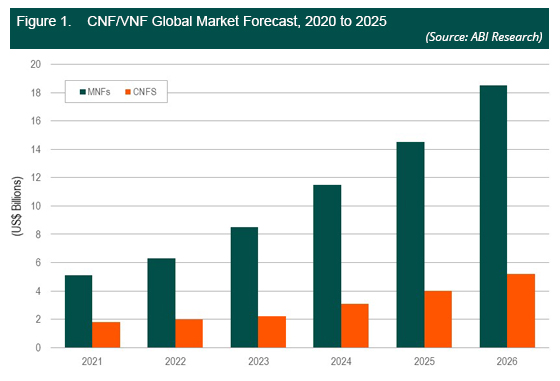 The challenges are multi-fold and require all stakeholders to work towards the goal of actualizing cloud-native technology in order to leverage the full potential of 5G use cases. Generally, these challenges are:

CSPs will have to begin the process of innovating and trialing by rapidly deploying cloud-native technologies. The first step is to identify parts of the telco network that can be migrated to the cloud. Generally speaking, the simplest use cases would be to cloudify the Centralized Unit (CU) of the RAN and deploy BSS functions on the cloud. Newer use cases include deploying the core network on the cloud, much like what DISH is doing with AWS. ABI Research believes that this partnership will pioneer serious cloud-native deployments for CSPs and increase technological readiness towards building core networks on the public cloud, as well as build momentum for CSPs to begin containerizing their current VNFs as well.

However, we also recommend CSPs to proceed cautiously due to the challenges in ensuring telco-grade requirements as mentioned earlier. For one, building an open and modular multi-vendor environment (elaborated in IN-6203) is a complex process that cannot be applied to the entire telco network; certain use cases (e.g., massive MIMO) have certain specialized requirements (e.g., specialized hardware, GPU acceleration requirements) that make it unfeasible to be a fully “open” network. CSPs must outline the costs and benefits of deploying a cloud-native network and the possible use cases it will enable. CSPs must also be mindful of the type of platform that they are currently using and develop a migration plan. For example, some NFVI platforms that operated on OpenStack do not have a clear migration path to bare metal for its existing VNFs and so CSPs must be mindful of this.

Moving forward, CSPs must be mindful of the platforms that they are deploying for cloud native. This includes having a clear vision of what the CSP wishes to achieve and ensuring that the vendors they work with would be able to deliver on these promises. While the likes of Red Hat, VMware, Google Anthos, etc., can provide a common horizontal platform for CSPs to deploy a multi-vendor cloud-native platform, there are soft lock-ins that exist, such as Red Hat requiring all operating systems to be run on Linux—or more precisely, Red Hat Enterprise Linux. Furthermore, orchestrating a multi-vendor environment also brings its own challenges, such as difficulty in troubleshooting and interoperability issues. For traditional NEVs such as Ericsson, Huawei, Nokia, and Samsung, while they are gradually moving towards becoming more modular, forming partnerships with the likes of Red Hat and VMware to host some of their network functions, their value proposition is still largely end-to-end pre-integrated systems utilizing their own network functions.