On November 27, 2017 , ABB and Kawasaki announced they would form a strategic partnership on sharing knowledge and promoting industry awareness about the benefits of collaborative robotics. The partnership comes at a time of considerable optimism regarding the present and future health of the collaborative robotics market. Collaborative robots are human scale systems that are easy to set up and program, are capable of being used by workers with a wide range of qualification levels, can support multiple types of automation, and can work safely near human workers.

On November 27, 2017 , ABB and Kawasaki announced they would form a strategic partnership on sharing knowledge and promoting industry awareness about the benefits of collaborative robotics. The partnership comes at a time of considerable optimism regarding the present and future health of the collaborative robotics market. Collaborative robots are human scale systems that are easy to set up and program, are capable of being used by workers with a wide range of qualification levels, can support multiple types of automation, and can work safely near human workers.

To be defined as collaborative, these systems must support four separate capabilities: 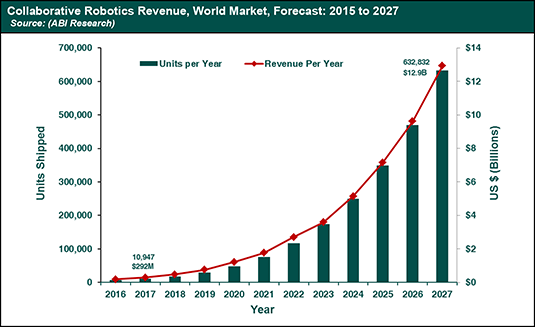 Collaborative robots are experiencing this growth because they meet the changing needs of manufacturers. Previously, the primary benefit of robotics was the productivity increases accrued from their speed, repeatability, and precision.

Now, flexibility is of primary importance to businesses that want to reap the benefits of ‘Agile Manufacturing’ and production processes that do not make assumptions about volume levels or types of products being manufactured. This makes collaborative robots extremely suitable for 21st century manufacturers that must be responsive to customers that demand rapidly produced, highly customizable and superior quality products at low cost.

Human workers and machines are generally seen as mutually exclusive. This is partly because since their widespread adoption in the seventies, industrial robots have been too large and too powerful for humans to work alongside them safely.

However, humans and robots are complimentary in their skills. While the former has intelligence and adaptability, the latter has brute strength, precision, and repeatability. When they work collaboratively they have the potential to dramatically improve capability and productivity across a range of use-cases. Some include:

A further use case could be defined as the finishing operations of manufacturing. Automotive manufacturing among the most developed economies is highly automated, but much of the work across the upstream suppliers is not. As Rosanna Myers of Carbon Robotics explained, when automobiles have been built, they will need excess metal scraped off. This involves getting inside the car and does not suit traditional robots. In most cases, this is performed by humans for very limited pay.

Collaborative robotics are desirable because they can be used to shorten and ease dull and repeatable tasks that nonetheless require dexterity, efficacy, freedom of movement and interaction with humans.

There are, however, some drawbacks to collaborative robots at their current stage. Due to their working with humans, the current models must sacrifice strength and speed, things that are a major reason for the popularity of robotics in general. At the same time, their price remains high, as does the expertise required to implement them in a business.

The premise of the partnership is two-fold, to promote collaborative robotics and to harmonize industrial practices in programming, safety and communication.

Promoting collaborative robotics will chime with a wider effort among industry leaders to integrate concepts like ‘Smart’ ‘Agile’ and ‘Lean’ manufacturing into policy-making and industrial strategy. The push to find consensus in communication, safety standards, and programming will help define the regulatory framework behind collaborative systems and benefit those vendors that can meet the standards.

From a wider robotics perspective, ABB and Kawasaki are primarily competing in the industrial automotive sector. ABB is the clear market dominator in industrial robotics, with 49.3% of the revenue share for 2015. By contrast, Kawasaki had 4.8%.

Neither are leading in the much smaller collaborative robotics market, which has been dominated by Danish company Universal Robotics, recently acquired by Teredyne and accounting for 71% of Co-Bot revenue in 2015. In the same year, ABB’s Yumi and affiliated co-bots accrued 5% of the market. Though they are not the primary actors in the co-bot market, ABB and Kawasaki are large companies with significant resources that can be brought to bear on the industry as a whole.

The partnership should not admonish the fact these two remain competitors, ABB’s Yumi and Kawasaki’s dual-arm SCARA Robot will still be competing for market share. The basis of the agreement is more focused on pooling their resources in educating and influencing policymakers, NGO’s, Universities, and the public about collaborative robotics.

Geopolitically, the partnership makes sense. Based in Zurich, Switzerland, ABB is Europe’s primary robot manufacturer, while Kawasaki Heavy Industries is one of Japan’s top manufacturing companies. The partnership will act as a forum for the robotics industries of both East and West to collaborate and share their ideas, as well as get a better understanding of how to compete.

As alluded to, ABB and Yamaha are not even the primary vendors in the collaborative robot space, and there are many developments taking place that are driving the industry, to which this agreement is a peripheral signifier rather than a landmark event.

At the macroeconomic level, developed economies in the Europe, North America and  East Asia are seeing two major phenomena, Labor shortages and reshoring. In the former case, the ageing population has left many economies unable to increase their employment.  Reshoring is the process by which manufacturing jobs that were outsourced are beginning to return operations to their countries of origin. This is down primarily to the rising wages of developing economies, but also to the longer delivery cycles, weak quality control, time zone differences, intellectual property theft and increasing shipping costs of outsourced manufacturing. At the same time, robotic innovation is making the developed economies more competitive.

From an industry level, roboticists are making ground in solving the weaknesses of collaborative robotics, including:

California-based Carbon Robotics has made significant strides in lowering the cost through their adaptable industry-grade arm, while Franka Emika is pursuing a similar strategy of lowering unit-cost to compete with Universal Robotics, the market leader.

Increasing the power of collaborative robots opens their capabilities and makes them more adaptable, and the current models are already capable of lifting more than they do. It is concerns about the robot’s image recognition and safety that holds back their payload. All major vendors are working on fool-proof image recognition that will improve the device’s detection of human workers. In the case of Veo, software is being developed that will hopefully allow humans to interact with the much larger (non-collaborative) robots found in the automotive sector. Current computer recognition software is not fool-proof, and so holds back collaborative robotics. The necessary innovation will focus on sensors and image recognition to improve safety and allow for the scaling-up of platforms.