Yamaha Motor’s New Agriculture Drone Enters into A Market in Which Much Is Spoken, But Little Is Known

The development of a multirotor system for field spraying is itself strange. Yamaha already provides such services with two unmanned helicopters; the Fazer and the R-Max. As emphasized in a recent ABI Insight Is There a Real Alternative to Multirotors in the Commercial Drone Market? Probably Not., helicopters have many advantages on multirotors like the YMR-01. They have greater endurance and efficiency, and can therefore cover a wider area in one flight. The YMR-01is advertised as being able to spray 2.47 acres per flight. In farming terms, this is a minuscule range, with the average American farm consisting of 442 acres in 2016, according to the US Department of Agriculture. Using the YMR-01 in this context would mean a long day, and likely poor return on investment (ROI). The helicopters have a much larger payload and can carry more spray. On the plus-side for the YMR-01, it is considerably cheaper than the US$250,000 R-MAX.

Now, Yamaha Motor’s unmanned helicopters have been successful in Japan, where they cover some 40% of the rice-paddies. Whether that transfers into a multirotor system succeeding in the U.S. market is doubtful. Rice-paddies and other crops in Japan that employ Yamaha’s products are generally places that are hard to reach with ground-based sprayers.

Altogether, this doesn’t represent an augmentation of current capabilities rather than a cheaper platform and solution to a niche market (small and hard-to-access fields), and leads one to wonder about the course of Yamahas ag-drone strategy, at least outside of Japan. Spraying crops with drones is useful but may be inferior to other precision agriculture solutions. As noted in a recent ABI Insight, Blue River Technologies has incorporated Variable-Rate technology into robots that are attached to farming vehicles. Machine learning is then leveraged to provide prescription on what areas need spraying. This allows for huge savings in the use of chemicals, but such levels of efficacy are not possible through Yamaha’s drone-spraying solution.

The ability of the YMR-01 to spray a relatively tiny area is a rudimentary announcement on its own. The multirotor is less efficient than the single-rotor in terms of energy. Smaller and faster moving rotors require more energy than a single large one and thus limit range and payload. On the plus-side, multirotors have better stabilization, are cheaper to manufacture, and easier to control. The development of such a system is in response to a flood of ever-more cost-efficient platforms being developed by DJI, which can be retrofitted with sprayers cheaply. They won’t be as effective as Yamaha’s legacy helicopters (that have been developed for some three decades), but they will undercut them through lower prices.

The low-hanging fruit of dispensing agrochemicals is not going to be the primary source of revenue for drone solution providers in agriculture. There is a very large portfolio of vendors (PrecisionHawk, DroneDeploy, 3DR, Skyward, Agribotix, Resson etc.) who have put significant investment in providing drone analytics. By contrast, far fewer have placed great emphasis on spraying, notably Yamaha and DJI. As showcased by the graphic below, there are a variety of aerial imaging use-cases for unmanned aerial vehicles in Agriculture. 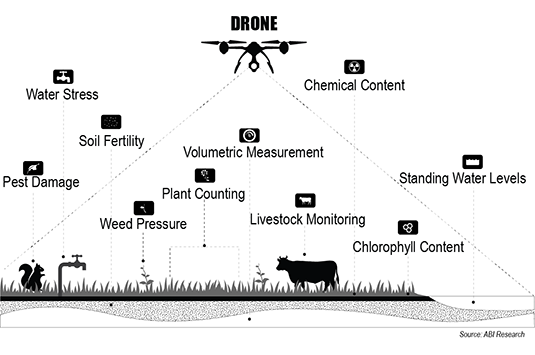 Yamaha’s sUAV-Agriculture market is characterized by small and medium businesses utilizing drones over small areas that are hard to reach. This market has some purchase internationally but is not transformative. Such a business model is also highly vulnerable to Chinese manufacturers who have proven themselves able to produce excellent multirotors that can perform tasks like spraying at a level sufficient for small farming businesses. The YMR-01 is the Japanese company’s attempt to preempt this development, but given the experience of US companies like 3DR, it will be mightily difficult to compete in platform production with Shenzhen-based Chinese vendors like DJI and Yuneec.

The Yamaha announcement comes at a time of confusion regarding the potential growth and size of the commercial drone market in agriculture. There are both figures that go beyond ABI’s initial predictions for market growth, but also many journalist sources that express major skepticism about the state of the sector. It is an odd situation where there are arguments that the market is both undervalued and overhyped.

ABI Research The Small Unmanned Aerial System Ecosystem: Product, Accessory, Service, and Application Revenue by Market Segment forecasts the agricultural market to balloon in absolute terms from an estimated US$ 166 million in global revenues from 2014 to US$ 3.25 billion by 2025. However, in relative terms, its market share of the total commercial sUAV market will decline from 25.6% in 2014 to 14.5% in 2025. This is due in part to more impressive signs of growth in the infrastructure and media sectors.

Agriculture was initially considered the largest attributable market for drones. This was down to the obvious use-cases, and also because the regulatory environment has been more amenable to flying drones in large open spaces rather than in crowded areas.

However, this assumption has been strained for a few reasons:

Asset Value: Several drone solution providers, such as Sky-Futures, argued that the profitability of a drone market would be defined by the value of the asset being monitored or inspected, but also on the skill necessary for the flying mission. It is relatively easy to buy a cheap drone platform that can fly over a field and provide rudimentary aerial intelligence, but the barriers to inspecting critical infrastructure or oil & gas facilities are much higher. For specialist work like that, drone professionals can charge a lot more.

Alternative Methods of Aerial Imagery: Despite assumptions to the contrary, there was aerial imagery, planting and spraying in agriculture before the commercial adoption of drones. Manned aircraft have been surveying, monitoring and inspecting crops for decades, and even now, new aerial imaging companies like Ceres Imaging choose renting piloted aircraft over maintaining a drone fleet. There are also companies like Esri or Airbus Aerial who will often use drones, but will also be open to manned aircraft or satellite imagery,  in other words, platform-agnostic. This is different to a separate sector like critical infrastructure inspection, where the properties of a small agile and stable drone become useful.

Lack of Connection Between Farmers and Drone-Providers: Despite being associated with aerospace, the majority of drone solution providers are heavily populated with software developers. The major company that has propelled the industry forward (DJI)) has expertise in camera and sensor technology. There has thus been a disconnect between the outlook of drone providers and farmers who are skeptical of capital-intensive technology solutions that don’t guarantee a significant and rapid ROI.

For their part, many farmers from small businesses either are unaware of the FAA 107 regulations or simply ignore them, stifling the adoption process and fermenting bad practices.

None of these issues will stop greater adoption, but the growth may be less spectacular than many have suggested. Drones are a tool, not the essential component of a preexisting aerial imaging market that had already been widespread in agriculture. Yamaha’s spraying drone has a market, but it is limited, and may be subsumed by smart variable-rate spraying performed by ground robots.