The Wilson Sporting Goods Company is set to release its Wilson X Connected Football in September 2016, following the release of its connected basketball in September 2015. The company targeted its Wilson X Basketball toward pro-athletes, while the football will cater to a wider market. Wilson featured the following product demonstration booth at a sports camp for boys and girls between first and eighth grade, which is quite a different target market than pro athletes: 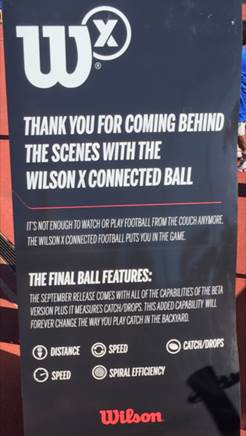 The Wilson X Connected Football uses an internal gyroscope (the company claims that this does not affect the weight or torque of the football when compared to non-connected footballs) to measure the following metrics: the distance a ball is thrown, the spin rate, the speed, its spiral efficiency, and the user’s catch/drop rate. The connected football is priced at US$199.99, which is the exact price of its connected basketball already on the market.

Consumers can get a non-connected football for under US$10.00 at nearly any retail or sporting goods store, so it’s worth noting the features that Wilson believes command a price point that is approximately 20 times higher. The sensors on the device record the metrics stated above and connect to a free application on both iOS and Android devices via low-power Bluetooth. By connecting the device to a user’s smartphone or device, Wilson is hoping to make the experience more interactive. The football conveniently does not need to be charged, because it runs on a single internal watch-style battery, which Wilson claims lasts about two years with typical use. Once that battery runs out, there is no way to remove it without permanently damaging the ball. So, after two years of use, the connected ball simply becomes a regular ball. Wilson claims that this intentional design keeps the cost down and allows the ball to be waterproof. And typical footballs have a lifespan of only a couple years, as well. However, this is not a typical football, nor is it priced as such.

Even with the high price, Wilson wants to reach a wider market with its connected football product. From its advertising and marketing demonstrations, that wider market is the US$7 billion per year youth sports market. To reach this target, the company needs to appeal to parents, as middle and high school students tend not to have disposable incomes that would enable a purchase like that. While Wilson claims that its connected football is set to entertain users like a video game, it is highly unlikely that the average parent would spend US$200 on an entertainment device that provides one very specialized application experience. It is much more likely that Wilson’s true target with this device are those parents who push their children to be great at sports, and those who scream at coaches, umpires, and other parents due to their false or unrealistic beliefs or opinions about their children. This is not an entertainment device, nor is it priced as such. Rather, it is a practice device that uses data analytics to drive user efficiency.

If Wilson wants to release an entertainment device like it claims, the price point has to be considerably lower. Additionally, if Wilson’s connected football follows in the footsteps of its predecessor, the connected basketball, there will be limitations and flaws that will only become apparent to the user after purchase. Consumer reviews state that the connected basketball is extremely sensitive to the size of the backboard, type of net, and distance the ball is shot. The device also is not entirely accurate, with some users stating that it was more beneficial for them to count hits and misses in their head than to use the false results the ball output. Additionally, the data generated did not provide tips on how to correct mistakes or other metrics that could be used to help improve performance. These are the first editions, so hiccups are to be expected. However, the consumer IoT market will continue to be held back by overpriced products like these that under deliver, lack a clear value proposition, and are mismarketed.