The Only 6 Smart Apartment Data Points You Need To Know 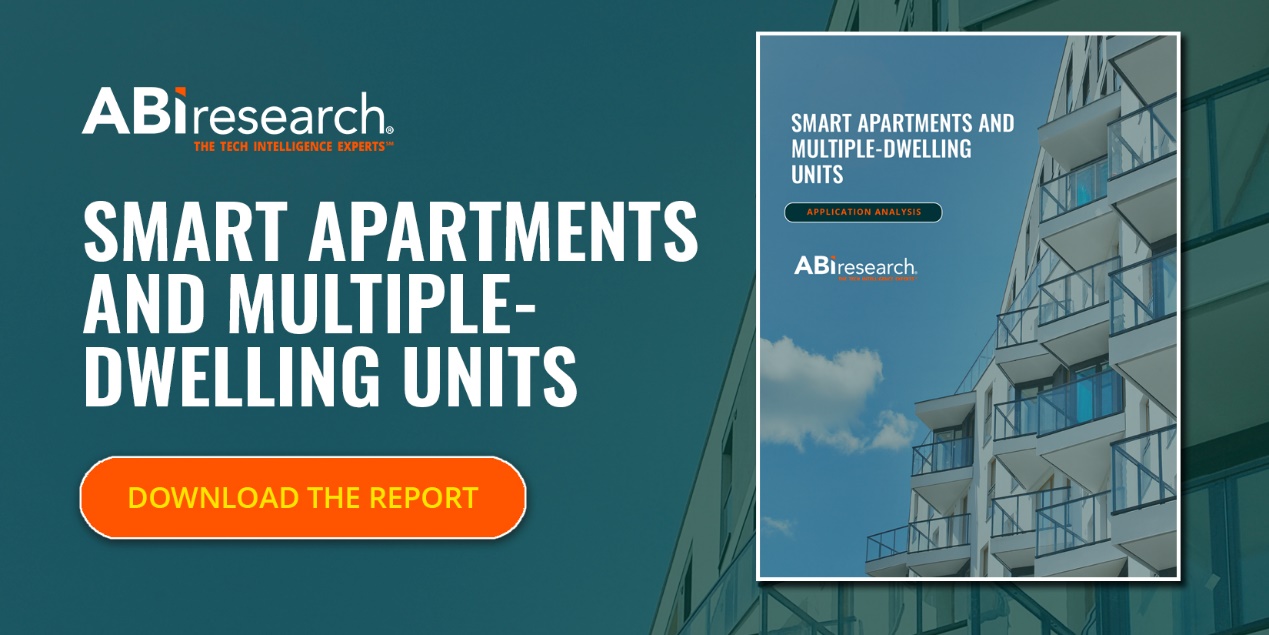 ABI Research’s recent post on smart apartments shed light on the practicality of using innovative technologies that were once exclusive to homeowners in the Business-to-Business (B2B) space. As the data ABI Research recently uncovered goes to show, the smart apartment market is on pace to be worlds apart from what it is now. Compared to the US$459 million total smart apartment revenue expected to be generated in 2022, that figure is expected to be more than US$13.3 billion in 2030.

As a broad overview, here are some of the biggest use cases for smart home technologies:

Not only would a smart apartment attract more potential residents, but these innovative technologies provide operational savings, as they lessen the reliance on trained staff, optimize heating and cooling consumption levels, and detect potentially expensive water damage. At the same time, a new revenue stream can be created in the form of a monthly add-on charge as tenants find the convenience of non-basic smart capabilities too good to pass up.

As of now, smart apartments are still incredibly niche, accounting for just 3% of the total U.S. rental apartment market. In other parts of the world, that number is even lower. However, ABI Research’s smart apartment data indicate a substantial increase in the installed base. Globally, the Compound Annual Growth Rate (CAGR) between 2022 and 2030 will be 49.7%.

Although Western Europe will be the leading market, the eastern half of the continent is no slouch. Growing at a CAGR of 76.1% and reaching a 2030 installed base size of 7.25 million apartments, Eastern Europe is comfortably the world’s third largest adopter of smart apartments. 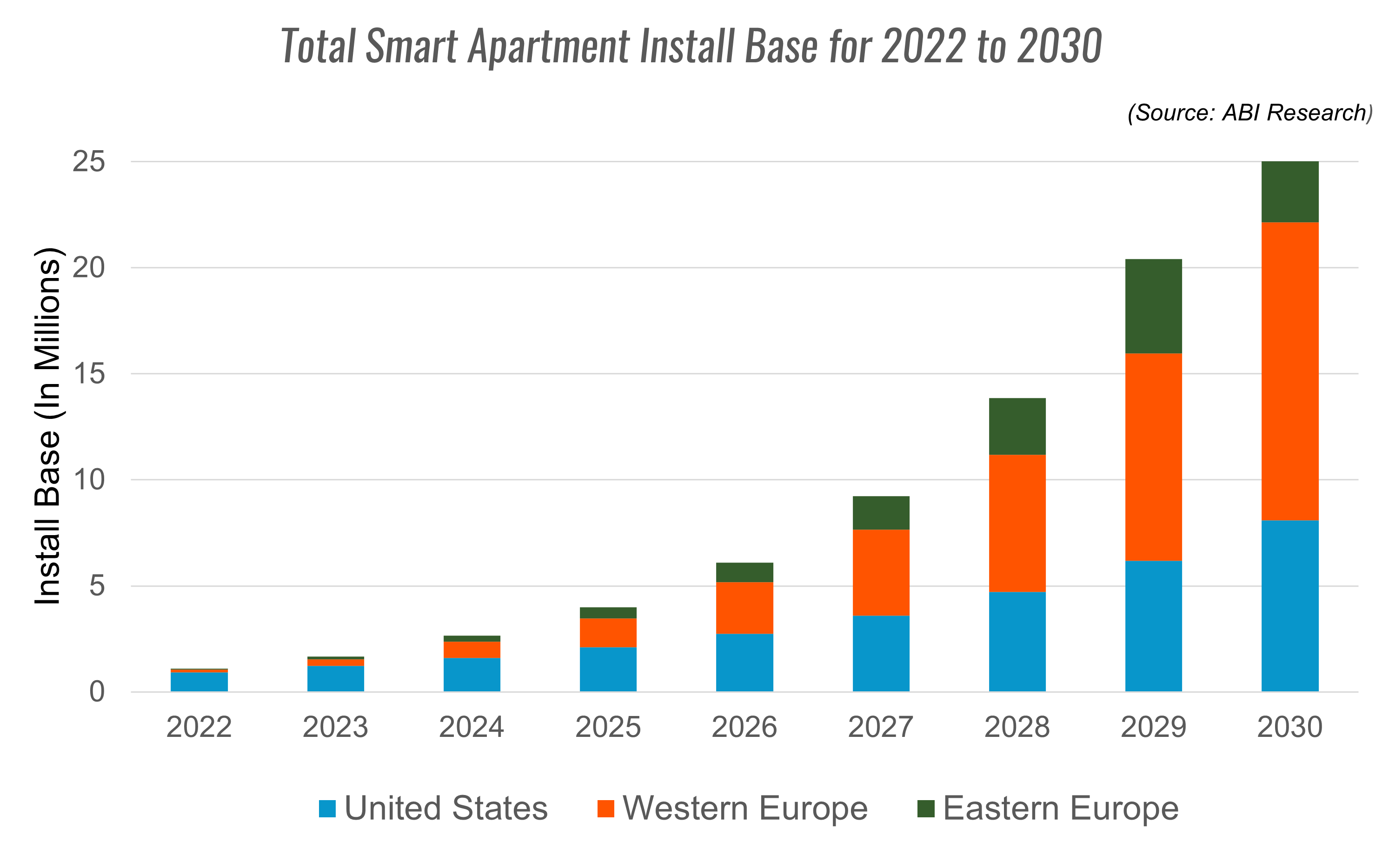 Asia-Pacific’s installed base is expected to see a 65.2% CAGR, penetrating 5.43 million apartments by 2030. Something interesting that ABI Research’s smart apartment data reveal is that although Asia-Pacific will comfortably outpace the Eastern European market throughout most of the 2020s, it’s the latter that will surge right past the former starting in 2028, and only break away even further in 2029 and 2030.

Eastern Europe and Asia-Pacific smart apartment revenue will gradually surpass the US$1 billion mark in 2029 and, by the end of 2030, each will have revenue of US$2.61 billion and US$1.96 billion, respectively.

Door lock and thermostat shipments will be near parity for the remainder of the decade, with both verticals growing at the same 47.6% CAGR between 2022 and 2030. Smart water sensors, growing at a modest pace with a 48.3% CAGR, are by far the most popular choice among Multi-Dwelling Unit (MDU) owners/managers.

Other smart apartment hardware, such as smart blinds, voice control front ends, smart lighting, and smart plugs, will remain a lot more niche as shipments will be relatively low. By 2030, none of these niche devices will surpass 5 million annual shipments.

By the same token, ABI Research’s smart apartment data show that thermostat revenue also outpaces water sensors, with 2030 revenue of US$452.06 million. It should be noted that door locks and thermostats already generate more sales than smart water sensors, so it’s not just a long-term forecast. 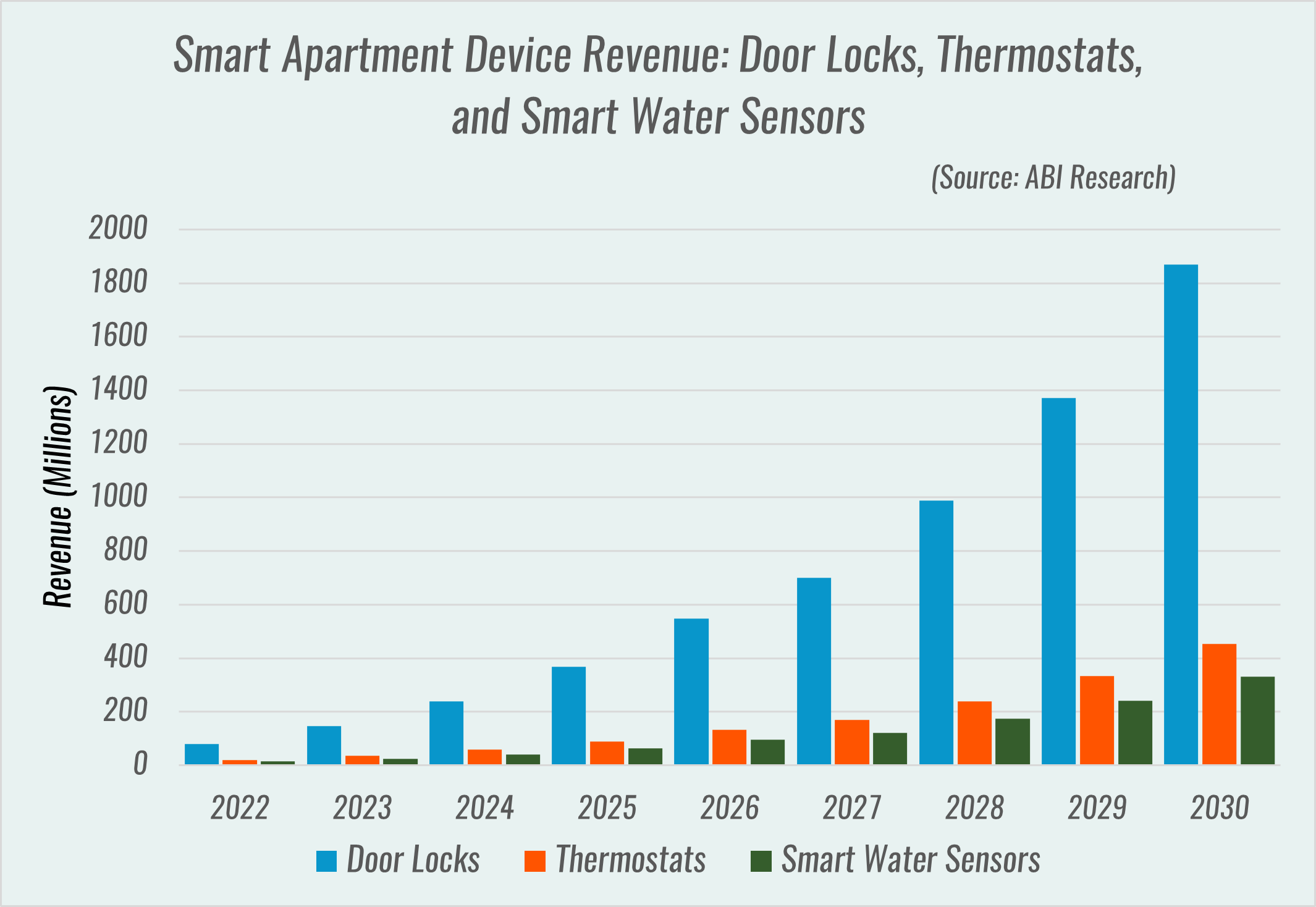 For smart apartment controllers, the three most common connectivity protocols used are Wi-Fi, Bluetooth single mode, and Z-Wave. And for short-range device connectivity, the trend is the same, with Z-Wave comfortably being the popular choice. This is largely due to the trust and mass adoption of Z-Wave in the leading U.S. market.

By 2030, Bluetooth single-mode device connectivity revenue will still be roughly US$15 million behind Z-Wave revenue. Wi-Fi will trail Z-Wave’s US$48 million 2030 revenue by more than US$29 million. Thread, although significantly behind Z-Wave and Bluetooth single mode, is expected to gain traction in the coming years as more support for Matter is pushed.

The smart apartment market may be small right now, but it’s steadily advancing toward mainstream status as more players are introduced and MDU owners/managers learn about the financial incentives and risk mitigation benefits that accompany smart devices. Whereas the installed base is just 3% of all U.S. apartments right now, by the end of the forecasted period for ABI Research’s smart apartment data, about a third of U.S. apartments will use smart technologies.

As the rest of the world markets take their cue from the leading U.S. market, substantial adoption rates are expected in other regions too, most notably in the European markets. The apartment renting lifestyle is much more commonplace in Europe, so it will eventually become the market leader as it represents greater market potential. It’s clear from our research that the biggest revenue driver for smart apartment hardware comes from security, with smart thermostats and smart water sensors receiving considerable interest.

As building owners continue looking for new Return on Investment (ROI) avenues, the industry will see exceptional investment. As the overall installed base is currently low, key players will focus on onboarding as many new clients as possible and will promote brand loyalty early, so they establish a firm foothold in major markets.

The Genius of Smart Apartment Solutions