As we unfold what smarter connectivity looks like in the future, consider the following stats:

Not only are more smart devices being deployed, but more types of devices are becoming smart.

All IoT applications are variations of either asset tracking (i.e., “where is something?”) or condition-based monitoring (i.e., “how is something?”), in combination with use case-specific characteristics that distinguish them as markets in their own right. Applications can be thematically grouped by similarity and significance into any number of categories: metering, tracking/location, smart home, monitoring, smart cities, and a long-tail selection of “others.”

Monitoring has consistently accounted for between a third and a quarter of all cellular IoT connections, strongly driven by automotive applications such as Original Equipment Manufacturer (OEM) telematics, aftermarket telematics, and fleet management. Yet, this stalwart will account for less than 10% by 2026. 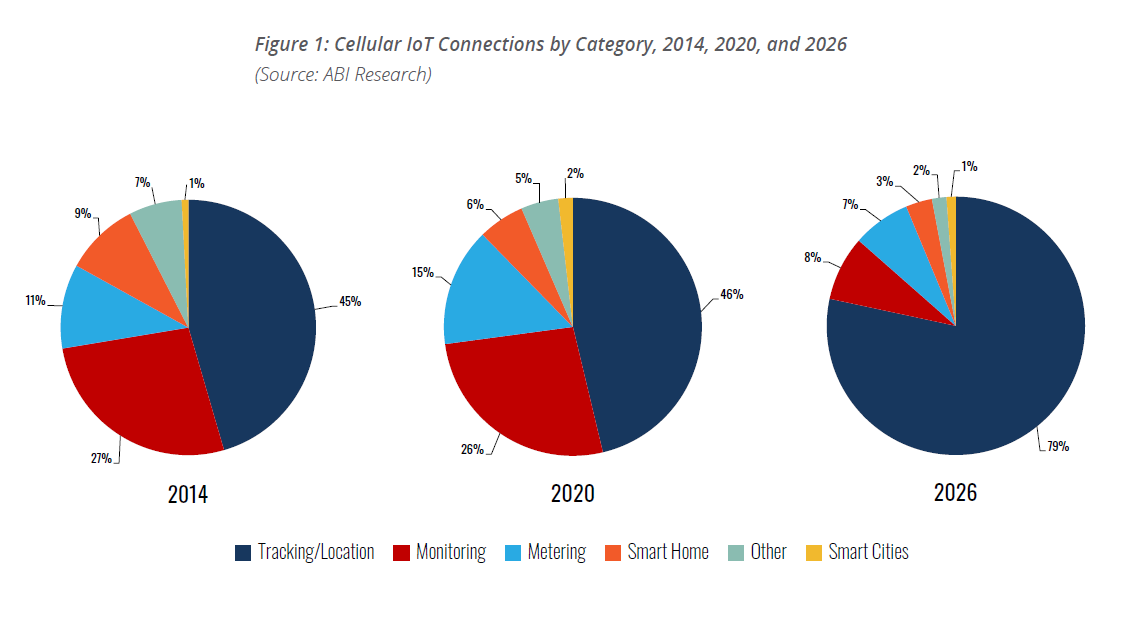 The fastest-growing category of cellular IoT applications is tracking/location, spurred on by businesses’ needs to diversify their supply chains and acquire greater visibility into the location of their assets and how they perform. The post-COVID-19 economy will rely on automated supply chain management more than ever to ensure business operations are not disrupted by similar events again, protecting their liquidity, securing jobs, and strengthening society. The concept can be extended beyond fleets and goods, to reusable packaging and other returnable business assets that reduce waste and provide a Capital Expenditure (CAPEX) saving.

Consumer markets also play a role, as the tracking technology finds its way into general-purpose use, enabling the notion of the shared economy. It encompasses myriad use cases for high-volume publicly rented or borrowed equipment and transforms fleets of physical products into networks of Connected Infrastructure as-a-Service. Supply chain visibility and general-purpose Low-Power Wide-Area (LPWA) asset trackers that are cheap enough to be attached to anything provide the ability and motivation to connect whatever we want; from shared cars and bikes for urban mobility, to power banks, lockers, and shared storage spaces.

For the ability to connect diverse IoT device types, with different needs, at massive scale, and with global coverage, the time is now. The role of Connectivity Management Platforms (CMPs) and global connectivity coverage solutions will be crucial in accomplishing this task, but perhaps with a new approach.

The first CMP vendors were infrastructure vendors, or were acquired by infrastructure vendors, and so already had long-standing supplier relationships with carriers. For them to do much more than offer equipment or offer managed connectivity would have meant competing with their own customers. This was and remains something that traditional vendors are not comfortable doing.

As enterprises’ connectivity needs have expanded globally, CMP vendors were asked to supply connectivity. To do so meant that a vendor had to operate its platform proprietarily and sell its services directly to enterprises, as a Mobile Virtual Network Operator (MVNO) or Mobile Virtual Network Enabler (MVNE). Proprietary vendors developed wholesale relationships with carriers in new geographies only when their enterprise customers requested it, or when required to secure a new contract. Global connectivity was not pre-emptively sourced, as the logistics of doing so in advance of securing customers was prohibitively time-consuming and expensive.

The IoT market originally had two types of CMP vendor: 1) those that supplied carriers who relied on roaming agreements to sell IoT services to enterprises, and 2) those that supplied enterprises and were customers of multiple carriers themselves. The former’s business was restricted to the largest carriers, with its platforms being used to complement the sale of connectivity. Conversely, the latter would often hand off the provision of connectivity to a preferred carrier partner, using connectivity as a channel to sell more licenses for its value-added platform. In neither scenario was connectivity monetizable as a value-added feature.

The pricing structures offered by traditional CMPs are not competitive today. Charging a set fee per device per month takes away a portion of the revenue carriers earn from each IoT connection. That fee can be between 10% and 20% of a carrier’s connectivity revenue--making traditional CMPs a loss leader, not directly monetizable, not enabling carriers to charge any more for connectivity, and only allowing them to serve IoT connections and win enterprise contracts. Vendors are unwilling to revise their licensing strategy, despite it being especially inappropriate for Cat-M and Narrowband IoT (NB-IoT), which are technologies that did not exist when the platforms were conceived, but which will make up the majority of cellular IoT connections in the near future. While high in volume, Cat-M and NB-IoT are low in data usage and Average Revenue per User (ARPU), and expensive licensing structures will make them uneconomical for carriers to serve.

Carriers’ efforts in developing a network to serve IoT connectivity are naturally focused on their own footprint, where they have full control and can make the biggest difference. Internationally, carriers must rely on roaming agreements, just as they do with consumer mobile connections. But roaming agreements are not good enough to guarantee the QoS and Service-Level Agreements (SLAs) demanded by the business-critical nature of IoT devices. This is especially true for Tier Two carriers that do not have the clout to negotiate the best international rates or to effectively assemble global coverage at a price that is low enough and predictable enough. Continuity of service availability at a guaranteed price anywhere in the world is crucial for provisioning the IoT. Traditional CMPs could not help with this, severely limiting many carriers’ opportunities.

Carriers do not have a physical network outside of their footprint. Even the biggest international carriers that are influential enough to easily negotiate the most favorable roaming rates do not have PGW/UPFs (Packet Gateway/ User Plane Function) or a core network in those other countries. Very large Tier One carriers may have a couple of PGW/UPFs at most, co-located with strategic partner networks, but no more. And Tier Two carriers certainly do not operate any international infrastructure. All carriers, regardless of size, also have a single core network that all consumer and IoT connections must share. This causes acute issues as consumer mobile broadband connectivity, which is the bread-and-butter income for carriers, cannot risk being disrupted by IoT demands, most often signaling. IoT devices might need functions that a consumer core network cannot be tuned to support.

Enterprises would like to maximize the IoT coverage they receive from individual service providers. Carriers will not willingly work together directly to augment others’ international coverage. Despite the earnest efforts of the IoT World Alliance and the Global M2M Association (GMA), the carriers participating in those industry associations will only authorize the transformation of a roaming connection’s International Mobile Subscriber Identity (IMSI) to that of a partner carrier’s network as a last resort and if maintaining the roaming connection is utterly uneconomical.

Conversely, directly competing carriers will each share their network resources with a common third-party MVNO/MVNE. And to an IoT carrier’s advantage nationally and internationally, an MVNE will just as easily collaborate with multiple carriers in the same country, giving best-of-breed roaming in a single business relationship, as well as full domestic redundancy.

An MVNE’s platform and network is built for integration, unlike a carrier’s. Carriers need domestic fallback more often than they admit to in order to provide the guarantees their IoT customers demand. Partial coverage is not good enough, and multiple carriers’ networks may be needed to provide full coverage. Although strong local rivals will never work together to enable each other to be more competitive and more effectively serve the same addressable market, they are willing to use a roaming IMSI to do so. There is irony in the fact that MVNOs and MVNEs can provide a more complete service than the carrier partners on which they rely. But it is a practical irony that purposely exists for other carriers to interface with and to allow carriers to do a better job of their own business. It is hard for carriers to build infrastructure outside of their own footprint, and should they do so, they would always prefer an Operational Expenditure (OPEX) over a CAPEX model, and to only incur costs when revenue is guaranteed.

IoT services need different billing plans. Carriers going to a traditional Operations Support System (OSS) and Business Support System (BSS) vendors changing their billing system could take 18 months of work and cost millions of dollars. Again, this would incur CAPEX before a carrier’s prospective IoT opportunity has provided any returns. Like the rest of a carrier’s core network, its existing OSS and BSS has been built for consumer services, with carriers being charged by their vendors on a per Subscriber Identity Module (SIM) basis. Carriers do not want to pay for IoT SIMs separately, they want a single payment package that will cover them for a million IoT SIMs at a time. Enterprises buy into the IoT to improve the efficiency and effectiveness of their existing businesses. To successfully deliver IoT services and to profit from them, carriers need to implement efficiencies of their own. Small differences in supply-side costs and improvements in demand-side margins pay dividends at IoT levels of scale.

Enterprises are not telecommunications-minded and are not interested in joining up with the services of multiple carriers; nor should they have to. How should a carrier go about serving the global networking needs of an enterprise? Today’s carrier needs a vendor that provides two products that are modular, but natively integrated. First, they need a tripartite IoT platform consisting of: a CMP for rate plan setting, data consumption monitoring, and connection activation; a dedicated IoT core for separating out the routing of IoT data and signaling traffic from consumer services; plus a simplified BSS for IoT billing only. Second, they need a global network made up of an international array of PGW/UPFs and an IMSI library of carrier partners that is already deployed and ready for use by enterprises anywhere in the world. QoS, low latency, and privacy regulation compliance are ensured by the dedicated network, while cost control issues are solved using local IMSIs.

The IoT market has changed, with new needs that must be supported by CMP vendors on both the supply side and the demand side. On the supply side, the cellular industry has made new air interfaces available in LPWA networks and 5G. They have made new provisioning techniques possible with Embedded SIM (eSIM) and have changed the way networks themselves can be deployed with private and hybrid architectures. On the demand side, connected devices have changed in terms of the international scope of their rollout, their power consumption and security needs, and in the local privacy restrictions that apply to the data they collect. The wide variety of IoT connectivity needs among device OEMs, enterprises, municipalities, and especially carriers is reflected in the richness of the addressable market for next-generation CMP vendors that can provide a multitude of solutions.

What's Next for Carriers and Enterprises?

Carriers are facing more specific and diverse demands for guarantees from IoT customers, especially when roaming. Enterprises are seeking new technical capabilities from networks and connected devices to expand their services, but in a cost-effective way that meets customer and local requirements. Despite increasingly differentiated uses cases, enterprises want IoT connectivity that is easier to buy. Carriers want to serve enterprises, but in an environment where no operator will have a globally deployed wireless network infrastructure they are inadequately equipped to manage and need help. The ability to connect different IoT device types with specific network requirements at a massive scale and with global coverage is valuable and vital to the future growth of the IoT market. The capabilities of next-generation CMP vendors, such as floLIVE, are a way to realize this.

The Next Breakthrough in Indoor Wireless: Distributed Massive MIMO