The Pervasive Screen Is Coming. But When?

The last decade and a half has seen a tremendous amount of change in the video market, especially when you consider TVs extended history. The arrival of YouTube in 2005 sparked a revolution in video that both scared the incumbents and excited the masses – this was the “democratization of video” and the power was shifting to the masses.

The death knell was ringing for pay TV and soon everyone would watch whatever, wherever, and whenever they pleased. Clearly this future didn’t arrive as some projected; pay TV is still with us and plenty of rules still determine the what/when/where/and how of viewing.

As with many transformative technologies, however, the process takes time, and while pay TV is declining in the U.S. it is far from dead and in fact one could argue OTT is starting to circle back to pay TV packaging (i.e. vMVPDs with increasing monthly rates that are nearly on par with traditional pay TV services).

Is OTT The Longterm Vision Of Video? If Not, What Comes Next?

Many within the industry are still adapting to the changing business models and distribution channels, but the trends we see today are generally well established and understood. While most roadmaps do not extend beyond these current trends, we can and should start to consider what lies beyond our typical forecasting and planning periods, because the seeds for this more distant future are already getting sown.

These changes will not only stem from its video roots, but see influences from a number of industries including: cloud services, smart homes and smart cities, autonomous vehicles, and 5G. As these respective markets develop and begin overlapping the confluence of these industries will produce what some are calling the pervasive screen.

Building Towards The Pervasive Screen

The streaming market has moved from streaming to PCs, to TV Everywhere (more akin to additive OTT services linked to pay TV subscriptions), and now increasingly a viewing split between mobile and connected TV (CTV). Mobile video certainly makes video portable and 5G is expected to bring more content and services to these devices, but when we factor in the influences from other markets the screens start to become less definable into separate buckets like mobile and CTV. The smart home for example is deploying smart displays, screens on appliances, mirrors, etc. to extend visual content beyond today’s typical displays. In addition to introducing more displays the virtual assistants will create continuity between services and content across displays and applications; interest in virtual assistants is also growing amongst pay TV operators and CTV manufacturers (and platforms) which will lead to more personalization of services (e.g. using voice, sign-ins, and/or computer vision to identify users), including cross platform targeted advertising.

The eventual arrival of mainstream autonomous transportation will also engender new touchpoints to bring screens and services on the go – 5G and VR/AR is also a prime candidate to benefit from autonomous vehicles. Companies today are already talking about the continuity of the viewing experience, moving from the home, to mobile, and mass transportation (e.g. airlines) but eventually the screen will become nearly ubiquitous.

This could occur through the proliferation of physical displays, but more likely once smart glasses reach a level of technical sophistication where it can adequately replicate viewing experiences that substitute physical displays then the screen could truly be viewed anywhere. Leading up to this future other technologies like location tech and computer vision will play larger roles to create further value by making content and services more contextually aware. So what might this future look like?

Our infographic below shows how screen technology has evolved and converged: 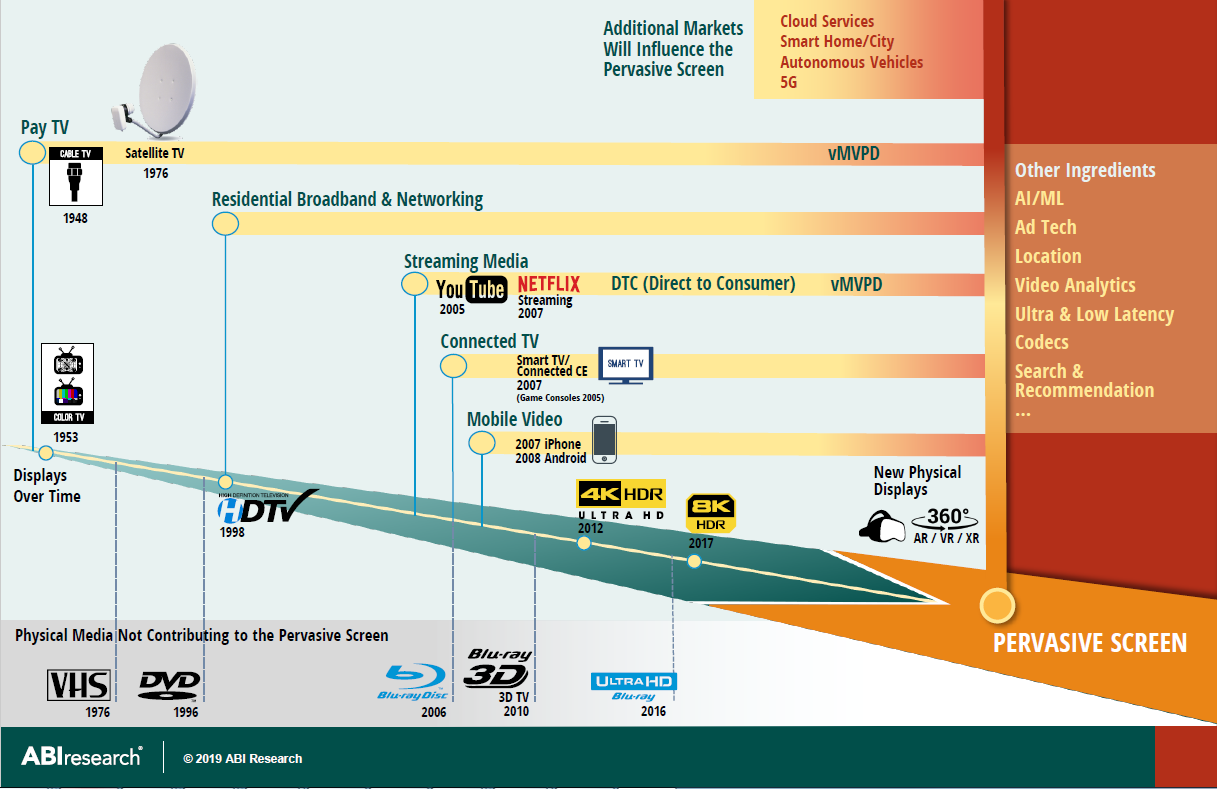 Hurdles On The Way To The Pervasive Screen

There are many opportunities created by this future. However, there are many hurdles in the way as well. Computer vision, for instance continues to enter the conversation within the media and entertainment market, but to date it has not resonated with consumers, in part due to concerns over privacy. When this technology is used as a protective barrier (e.g. facial recognition in place of a password such as Apple’s Face ID or Microsoft’s Windows Hello) however, it is more often viewed less apprehensively and is therefore better received.

While facial recognition could serve a similar role in the pervasive screen (e.g. identify someone to activate personal settings, services, pull calendar information, etc.) there are marked differences between the expectations consumers have sharing personal information with their mobile or compute platforms (via mobile devices) and media and entertainment companies/services. Content services today do not have the same relationships with consumers as mobile operators and platforms, but as features cross over (again thinking of virtual assistants) these barriers could start to come down.

Facial recognition is not the only means of identifying a user – voice and other biometric signatures could play a role as well. It will take time to clear these hurdles and for many of the privacy concerns to work its way through the various industries, but ultimately content and services will follow an individual throughout the pervasive screen experience.

AR and perhaps more pointedly, smart glasses, will provide the greatest jump start to this aspect of the market. AR, within the context of the pervasive screen, is the great equalizer. It allows a much wider swath of the population to benefit from the pervasive screen than those who have the financial means (and room) to install tomorrow’s displays throughout their households (this holds true for commercial/public displays as well). Smart glasses will also bring contextual awareness to the platforms and services, be it through location based technologies and/or computer vision.

As is true for all of these elements hurdles need clearing before this technology hits the mainstream and helps drive the pervasive screen forward; this includes pricing and the display technology itself which is not yet up to the task of replicating virtual displays that compete with physical screens.

Once the display is nearly ubiquitous many of the distinctions (and rules governing) between in and out of home viewing will diminish outside of personal settings (e.g. added privacy in the home). Services will utilize information about the user’s environment to curate content, ads, and features to maximize user engagement and value generation. The virtual assistant will not only provide information about content but engage with users about products and advertisements shown in video streams.

Tighter integration with personal calendars and user preferences will also help with recording (or accessing catch-up streams) of live content missed due to conflicting appointments. Ads showing local events could spur users to request a car service pickup and once inside the autonomous vehicle the user could continue viewing their content or engage with in-vehicle services like cloud VR gaming. Out in public the smart glasses will provide information and prompts (including serving video clips) about the surrounding environment and establishments. A user walking by a set of new toys for example could see an offer to see the newest trailer (and dates/prices) for the upcoming theatrical release (noting that their family has viewed the previous films on numerous occasions). Content and services will not only gain contextual awareness, but become hyper local as well.

Some of these features and services are already here today, but the market is far from reaching this pervasive screen – the ad tech market for example is still wrangling with cross platform attribution. Ultimately it will take time for these different elements to converge into a more cohesive experience. It’s easy to get ahead of ourselves and fast track some of these trends, but almost certainly we’re looking beyond today’s five year forecasting window. So while the pervasive screen is likely a ways out, this future is on the horizon and even though near term product and service planning may not directly point to this future, they should start to include (or at least enter the discussion) some of the elements of the pervasive screen.