T-Mobile: Déjà Vu All over Again

Much is written about Softbank/Sprint acquiring T-Mobile.  The scale economies suggested by the Rule of Three and Four support this move, but there are a lot of obstacles in the way.  Ignoring the serious political implications of a telcom merger like this, we can look at one of the measures the DoJ uses to assess these proposals, the Herfindahl-Hirschman Index (HHI).  The failed AT&T acquisition of T-Mobile meant an HHI = 3208.  For this proposal, HHI = 3162, is also troubling.  Previously, AT&T/T-Mobile meant a super-sized firm, while the Sprint/T-Mobile speculation presents the market with a third and strong competitor.

I think a combined Sprint/T-Mobile is better positioned for the long run rather than fight each other for third place.  On the contrary, politically savvy considerations of the Un-Carrier fascination may rule the day.

Here are the HHI components, based on 2012 Wireless Revenue market shares, with Sprint/CLWR/T-Mobile as a strong third competitor. 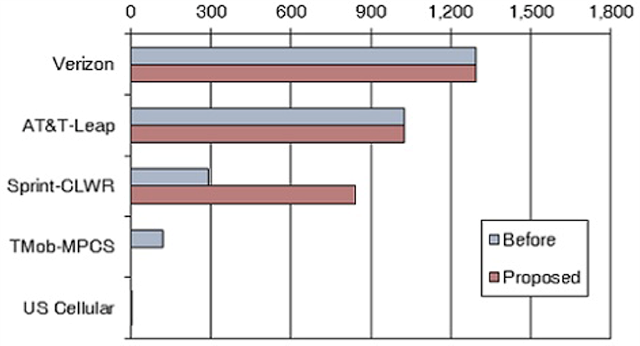