Much digital ink has been spilled over the topic of data roaming fees.  As I have said previously, Fixing Mobile Telecom with Consolidation and Pricing, an operator's over-reliance on roaming "got-cha" fees is a symptom of deeper market problems.  The current EU Commission proposal to elminate roaming fees is met with great vitriol from the operators, and rightly so, as this proposal will have unanticipated consequences unless other revenue streams are developed or improved.  The operators plea for favorable consolidation should be considered as one means to help them reduce reliance on roaming fees.

A problem with the European Mobile market is simply too many operators.  Charts below illustrate market shares on a per country basis for North America and Western Europe, with y-axis set to the same scale.  Can you guess which is which?  With both markets having a comparable population, it seems one market is hype-competitive, and the other is somewhat stable.  The operators whose market share do not fit the stability criteria of "The Rule of Three and Four" are shown in red.  Market pressures on the Telcos will continue regardless of how determined the regulators are to stand against the tide.  A deeper dive into the potential for operator consolidation is discussed in Consolidation of Euro Telco: When, Not If. 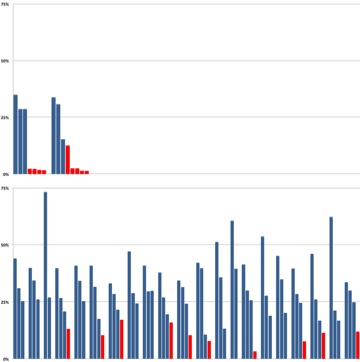